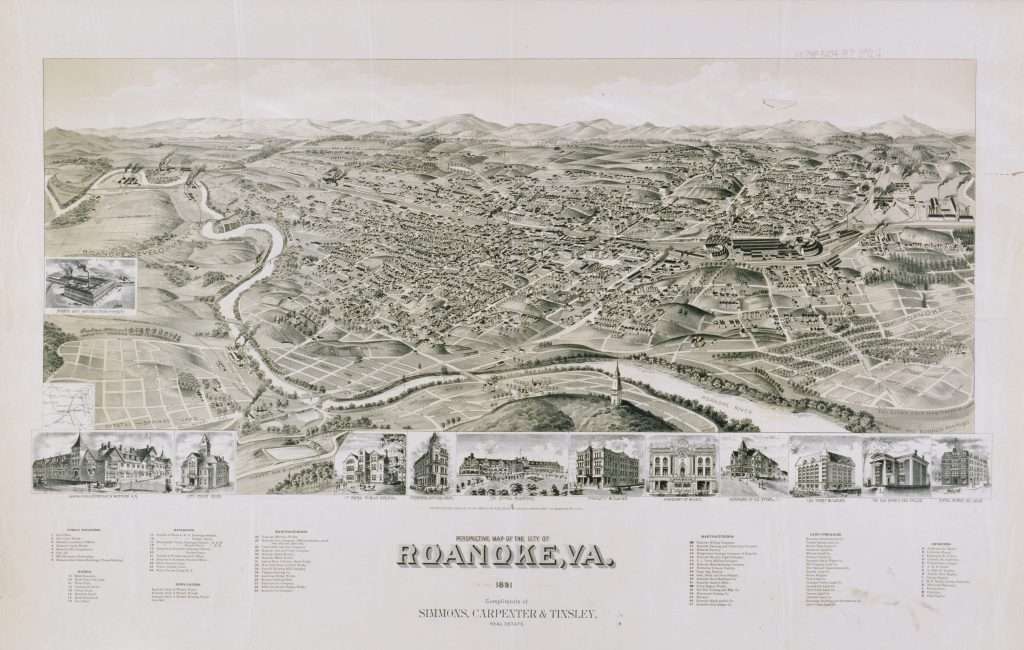 When the RWP began publication in 1891, Roanoke was a relatively new city with a substantial African American population. More than 4,000 African Americans lived in Roanoke, comprising roughly 30 percent of the city’s total population. Like the thousands of white newcomers who made their way there in the 1880s and 1890s, the vast majority of blacks arrived from surrounding rural counties in search of work, drawn to the so-called Magic City for the employment opportunities that flourished there after the Norfolk & Western Railroad chose Roanoke—then a small farming town called Big Lick—as the location of its headquarters and machine shops. Although most of the African Americans who moved to Roanoke ended up taking low-paying jobs as unskilled workers, city life was a drastic improvement on the economic prospects and isolation of sharecropping and tenant farming.

The majority of Roanoke’s new black residents lived in Gainsboro, the thriving black commercial and residential district across the railroad tracks from downtown Roanoke. (The name of the district has also been spelled Gainesborough, Gainesboro, and Gainsborough.) By the 1890s, African Americans in Gainsboro had access to a few dozen black-owned businesses and institutions, including several grocery stores, butcher shops, boarding houses, hotels, saloons, and restaurants; a doctor’s office and pharmacy; six churches and two schools; and John H. Davis’s newspaper, the Roanoke Weekly Press. Davis was a politically active entrepreneur who had grown wealthy by investing in local real estate prior to and during the land boom in Roanoke. He was also the leader of the city’s black Republicans and a leading voice for black interests in the city.

A Column from the Roanoke Weekly Press

In 1891, Davis began publishing a daily newspaper called the Press that supported the Republican Party. By May of that year, the paper had moved to a weekly publication schedule and was renamed the Roanoke Weekly Press. Davis was both owner and editor of the RWP, but he enlisted other prominent African Americans in Roanoke to assist him. Robert J. Boland, a successful Gainsboro physician, wrote for and edited the paper in 1891, as did Thomas T. Henry, a lawyer and Republican activist. Davis initially published the paper as a four-column broadside, but later expanded it to four pages of six columns each. By then, the RWP cost five cents for a single issue or $1.50 for a yearlong subscription.

Although Roanoke had a large black population, it is unlikely that the RWP achieved a wide local circulation or turned a profit. In addition to having only a small pool of potential black advertisers, much of the paper’s potential audience was illiterate or unable to afford the paper. Therefore, the RWP, like most black newspapers of the day, relied almost exclusively on a subsidy from its owner to operate. While Davis might have hoped that his paper would eventually become a successful business, he established the newspaper as a vehicle for his political and business interests as well as a way to encourage racial uplift.

Like other black newspapers, the RWP disseminated African American community news that the white press largely ignored. Most of its content therefore consisted of brief notes concerning local affairs or articles on racial issues. In the April 2, 1892, edition, for example, there is news about black businesses and Republican politics; birth, death, and marriage notices; arrest records; accounts of visitors or community travel; Gainsboro gossip; and news about church and organizational activities. Davis peppered his paper with frequent reminders to register to vote, and perhaps not surprisingly, advertised his businesses and position as an agent of the Eastern Building and Loan Association, a firm that solicited deposits from investors to make home loans.

In a common practice of the day, Davis traded content with other black editors, reprinting their papers’ stories and offering material from the Roanoke Weekly Press for use in their publications. The New York Age, one of the most influential black papers of the time, was quick to praise the emergence of the RWP, endorsing it as “a credible and ably conducted Afro-American newspaper.” The Times-Observer of Topeka, Kansas, likewise praised the appearance of Davis’s paper, noting that it was “chuck full of reading matter and paying ads.” Other well-known black newspapers, such as the Indianapolis Freeman and the Cleveland Gazette, ran stories and editorials clipped from the RWP.

Roanoke’s leading white newspaper, the Roanoke Times, took notice of the Roanoke Weekly Press not long after it appeared, observing that it emerged “full-fledged, ready for the fight, and set itself up as the organ of the colored people.” The Times noted that the Press had even attracted a handful of white advertisers, an astonishing feat given the racial climate of the day. Indeed, when the RWP began publication, newly arrived African Americans in Roanoke faced an ever-increasing wave of white suspicion, hostility, terrorism, and violence. The city’s white press was partially to blame for the worsening race relations; white papers rarely mentioned local blacks unless they stood accused of a crime, and then characterized them as disease-ridden lawbreakers unfit for citizenship.

Early in the 1890s, local authorities and white business owners segregated much of the city’s public space. At the insistence of the white community, police also instigated a campaign against black “vagrants” and African American saloons and eating-houses in Gainsboro, resulting in numerous arrests as well as accusations of police brutality from black residents. In response, someone dropped off several issues of the RWP at police headquarters, addressed to “Bloodthirsty and other policemen.” The officer in question, a white reporter noted ominously, “was present at the time and got his paper.”

Like other African American newspapers, the Roanoke Weekly Press opposed racism, lynching, and the segregation laws sweeping the South. It did not do so as stridently as sister publications in the North. Nor did the RWP crusade as zealously as the Richmond Planet, Virginia’s largest and most-renowned African American newspaper. Instead, Davis and his fellow editors encouraged political participation, education, and economic development while politely condemning measures designed to lessen blacks’ status as citizens. Indeed, in an editorial that appeared in an early issue, the paper advocated the sort of self-reliance made popular by Booker T. Washington, encouraging local blacks to “work for ourselves: educate, educate, acquire property, establish businesses and encourage manufactories among our own people.” While such sentiments were likely well received in Roanoke’s educated black community, they did not lessen the rising tide of racial intolerance. Indeed, less than a year after the RWP began publication, a white mob murdered a black man accused of assaulting a white girl—the first lynching in Roanoke. In the aftermath, much of the white community rejoiced and local papers endorsed “lynch law.” The RWP responded to the growing racial acrimony by counseling for patience. “It may be twenty-five, fifty, or possibly one hundred years,” a later editorial informed readers, “but you may rest assured that as sure as night follows day, the Afro-Americans of this country will get justice. God is not dead. And if justice is asleep, she will awake. Opposition will cease and the oppressor’s rod will be broken.”

The final mention of Davis’s paper appears in the March 29, 1892, edition of the Roanoke Times, which noted, “The Roanoke Weekly Press … has made its appearance again after a suspension of several months.” Not long thereafter the RWP more than likely ceased operations. While it is unclear what circumstances led Davis to discontinue publication, he might have done so because his paper never worked as a sustainable business venture. He was not alone; most African American newspapers of the time, and especially those in the South, existed only briefly before closing down. Davis, who subsequently lost much of his fortune and property in the 1893 economic depression, was debilitated by stomach cancer in 1894. When he died of the disease in 1896, the city’s black community turned out in force to view his body lying in repose at Davis Hall. Even one of Roanoke’s leading white papers lauded his numerous accomplishments and praised him for having done “all he could for the upbuilding of his race.” Although renowned at the time, Davis and his newspaper have all but disappeared from the historical memory and record in Roanoke and Gainsboro.