Skip to content
Author: United States Congress Transcription Source: The Law of Claims against Governments, including the Mode of Adjusting Them and the Procedure Adopted in Their Investigation (Washington, D.C.: Government Printing Office, 1875), 235.
FULL TEXT 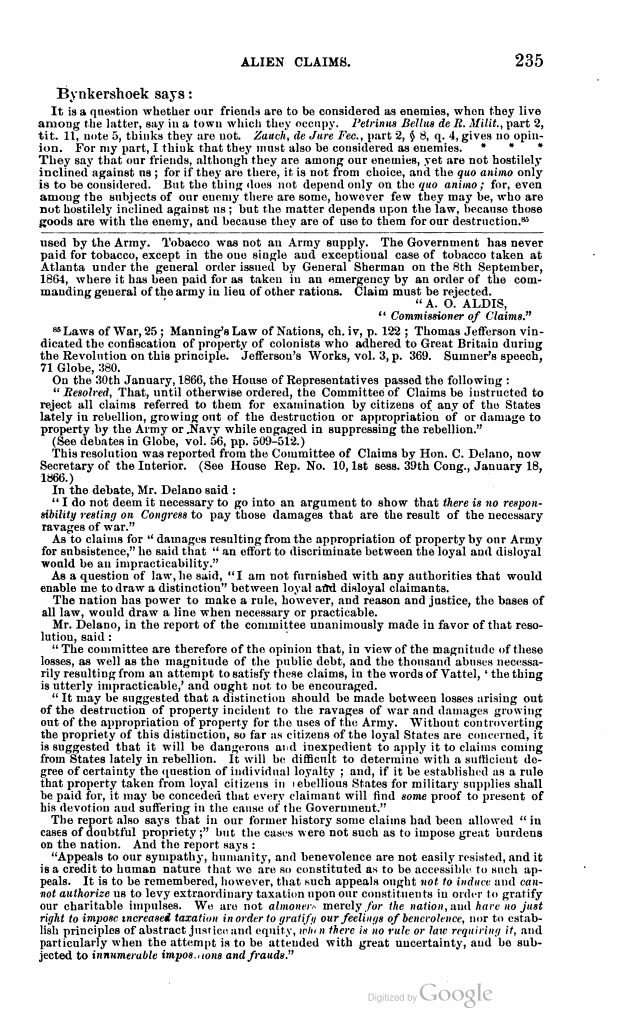 On the 30th January, 1866, the House of Representatives passed the following:

“Resolved, That, until otherwise ordered, the Committee of Claims be instructed to reject all claims referred to them for examination by citizens of any of the States lately in rebellion, growing out of the destruction or appropriation of or damage to property by the Army or Navy while engaged in suppressing the rebellion.”

In the debate, Mr. Delano said:

“I do not deem it necessary to go into an argument to show that there is no responsibility resting on Congress to pay those damages that are the result of the necessary ravages of war.”

As to claims for “damages resulting from the appropriation of property by our Army for subsistence,” he said that “an effort to discriminate between the loyal and disloyal would be an impracticability.”

As a question of law, he said, “I am not furnished with any authorities that would enable me to draw a distinction” between loyal and disloyal claimants.

The nation has power to make a rule, however, and reason and justice, the bases of all law, would draw a line when necessary or practicable.

Mr. Delano, in the report of the committee unanimously made in favor of that resolution, said:

“The committee are therefore of the opinion that, in view of the magnitude of these losses, as well as the magnitude of the public debt, and the thousand abuses necessarily resulting from an attempt to satisfy these claims, in the words of [Emer de] Vattel, ‘the thing is utterly impracticable,’ and ought not to be encouraged.

“It may be suggested that a distinction should be made between losses arising out of the destruction of property incident to the ravages of war and damages growing out of the appropriation of property for the uses of the Army. Without controverting the propriety of this distinction, so far as citizens of the loyal States are concerned, it is suggested that it will be dangerous and inexpedient to apply it to claims coming from States lately in rebellion. It will be difficult to determine with a sufficient degree of certainty the question of individual loyalty; and, if it be established as a rule that property taken from loyal citizens in rebellious States for military supplies shall be paid for, it may be conceded that every claimant will find some proof to present of his devotion and suffering in the cause of the Government.”

The report also says that in our former history some claims had been allowed “in cases of doubtful propriety;” but the cases were not such as to impose great burdens on the nation. And the report says:

“Appeals to our sympathy, humanity, and benevolence are not easily resisted, and it is a credit to human nature that we are so constituted as to be accessible to such appeals. It is to he remembered, however, that such appeals ought not to induce and cannot authorize us to levy extraordinary taxation upon our constituents in order to gratify our charitable impulses. We are not almoner merely for the nation, and have no just right to impose increased taxation in order to gratify our feelings of benevolence, nor to establish principles of abstract justice and equity, when there is no rule or law requiring it, and particularly when the attempt is to be attended with great uncertainty, and be subjected to innumerable impositions and frauds.“