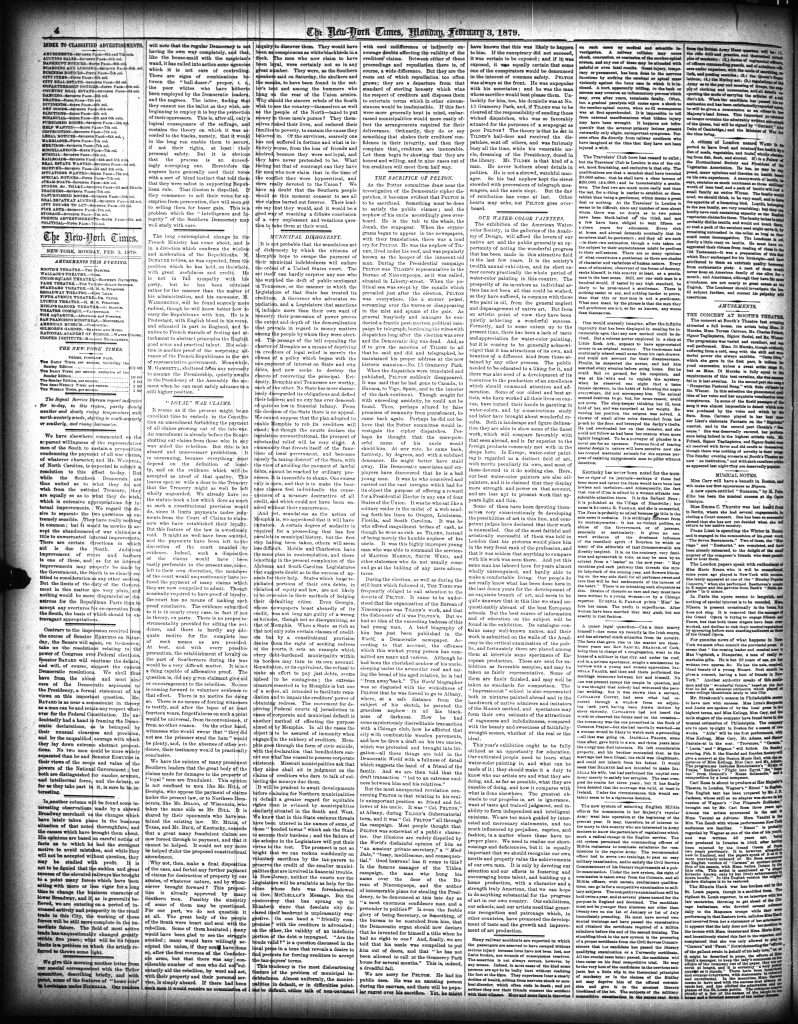 It seems as if the present might be an excellent time to embody in the Constitution an amendment forbidding the payment of all claims growing out of the late war. An amendment is already before the Senate shutting out claims from those who in any way aided the rebellion. But this is an absurd and unnecessary prohibition. It is unmeaning, because everything must depend on the definition of loyalty, and on the evidence which will be accepted as proof of that quality. This leaves open so wide a door to the Treasury that the Treasury might as well be left wholly unguarded. We already have on the statute-book a law which does as much as such a constitutional provision would do, since it limits payments under judgments from the Court of Claims to claimants who have established their loyalty. But this feature of the law is notoriously void. It might as well have been omitted, and the payments have been left to the discretion of the court unaided by evidence. Indeed, such a disposition of the claims would have been vastly preferable to the present one, since, left to their own discretion, the members of the court would unquestionably have refused the payment of many claims which they are now compelled to admit. Though nominally required to have proof of loyalty, the court has no means of making such proof conclusive. The evidence submitted to it is in nearly every case, in fact if not in theory, ex parte. There is no proper instrumentality provided for sifting the evidence, and there is hardly any adequate motive for the complete use of such means as are provided. At best, and with every possible precaution, the establishment of loyalty on the part of Southerners during the war would be a very difficult matter. It is not a thing capable of affirmative proof. The question is, did any given claimant give aid or encouragement to the rebellion. No one is coming forward to volunteer evidence to that effect. There is no motive for doing so. There is no means of forcing witnesses to testify, and after the lapse of at least fourteen years, forgetfulness on such a point would be universal, from its convenience, if from no other reason. On the other hand, witnesses who would swear that “they did not see the prisoner steal the ham” would be plenty, and, in the absence of other evidence, their testimony would be practically conclusive.

We have the opinion of many prominent Southern leaders that the great body of the claims made for damages to the property of “loyal” men are fraudulent. This opinion is not confined to men like Mr. [Benjamin] Hill, of Georgia, who oppose the payment of claims under the present law, or to Northern Democrats, like Mr. [Edward S.] Bragg, of Wisconsin, who takes the same side as Mr. Hill. It is shared by their opponents who have sustained the existing law. Mr. [Roger Q.] Mills, of Texas, and Mr. [James B.] Beck, of Kentucky, concede that a great many fraudulent claims are now forced through to payment, and that it cannot be helped. It could not any more be helped under the proposed constitutional amendment.

Why not, then, make a final disposition of the case, and forbid any further payment of claims for destruction of property by our armies, of whatever nature, and by whomsoever brought forward? This proposition is already approved by many Southern men. Possibly the sincerity of some of them may be questioned. For our part, we do not question it at all. The great body of the people of the South were heart and soul with the rebellion. Some of them hesitated; many would have been glad to see the struggle avoided; many would have willingly accepted the union, if they could have done so, after the first reverses of the Confederate arms, but that there was any considerable number of men who did not voluntarily aid the rebellion, by word and act, with their property and their personal service, is simply absurd. If there had been such men it would require no commission of inquiry to discover them. They would have been as conspicuous as white blackbirds in a flock. The men who now claim to have been loyal, were certainly not so in any great number. They were, as the Southern speakers said on Saturday, the skulkers and the sneaks, to have been found in the sutler’s tent and among the bummers who hung on the rear of the Union armies. Why should the sincere rebels of the South wish to see the country—themselves as well as the people of the North—taxed to put money in these men’s purses? They themselves risked their lives, and reduced their families to poverty, to sustain the cause they believed in. Of the survivors, scarcely one has not suffered in fortune and what is infinitely worse, fro the loss of friends and kindred, because they were not loyal, and they have never pretended to be. What feeling but that of contempt can they have for men who now claim that in the time of the conflict they were hypocritical, and were really devoted to the Union? We have no doubt that the Southern people would at this moment consent to see all war claims barred out forever. Their leaders say that they would, and it would be a good way of reaching a definite conclusion of a very unpleasant and vexatious question to take them at their word.