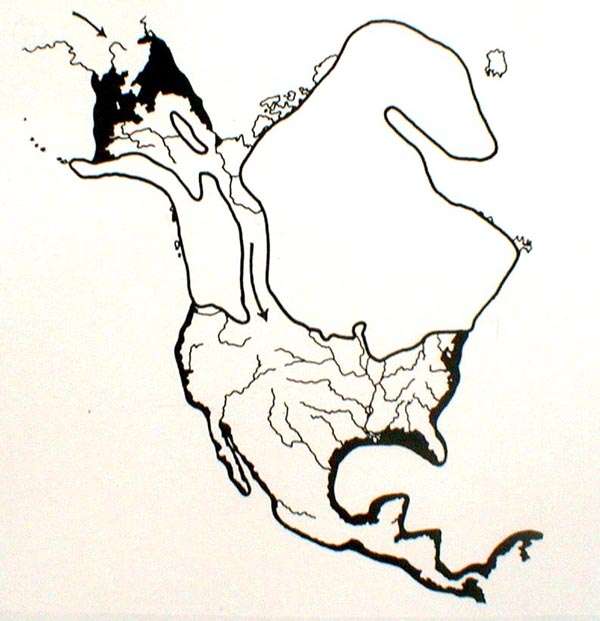 The first humans arrived in Virginia sometime at the end of the Ice, or Pleistocene, Age, having migrated from Asia to North America either by foot across a natural-land bridge or, more quickly, by skirting the Pacific coast in watercraft. For many years, scholars assumed that these so-called Paleoindians were the ancestors of Virginia Indians and brought with them Clovis culture, named for the lithic, or stone, projectile points first found in Clovis, New Mexico, in 1932. Studies of early skeletons, however, suggest that these first Virginians were different in appearance from later Indians, leading some researchers to dub them Paleoamericans. Meanwhile, evidence from the Cactus Hill site in Sussex County, where a small group of people lived on hill overlooking the Nottoway River, suggests that Paleoamericans were in eastern Virginia as early as 16,000 BC, or well before the emergence of Clovis culture.

By 18,000 BC, glaciers covered present-day New England and northern portions of Indiana, Illinois, and Ohio, but never reached as far south as Virginia. They had started to retreat by 17,000 BC and were gone from the continental United States by about 7500 BC, or during the Early Archaic Period (8000–6000 BC). This very gradual, transitional period produced an environment that is not comparable to anything in the modern world. Cold, dry arctic air from the northern glaciers may have reduced Virginia’s rainfall amounts by 20 to 50 percent of their twenty-first-century levels and temperatures were likely cooler by ten to fifteen degrees Celsius, with less seasonal variation, all of which created a tundra-like environment at higher elevations. The Shenandoah Valley and northern Virginia were marked by grasslands; conifer forests of pine, fir, spruce, and hemlock; and small islands of deciduous trees. The area south of present-day Richmond was warmer, allowing for the growth of trees such as birch, beech, and oak.

Due to the entrapment of ocean water by the glaciers, sea levels along the Virginia coast were lower than present levels by 200 to 263 feet, likely exposing more land for use by Paleoamericans. In addition, both plant and animal species existed in much greater diversity than today, although the wooly mammoth, mastodon, and other large Ice Age mammals were extinct by the end of the Paleoindian Period. Virginia’s coastline only reached its modern form by about 3000 BC, or during the Middle Archaic Period (6000–2500 BC).

Paleoamericans were hunter-gatherers who did not farm and so had no need for domesticated animals except for the dog, which they brought from Asia. As nomads, they moved from place to place, probably on a seasonal basis, eating whatever wild plants and animals were available. It is unknown whether the Paleoamericans in Virginia hunted big game, such as the mastodon, ground sloth, and mammoth—fossils of which have been found in Saltville in Southwest Virginia—but they did likely hunt deer, elk, bear, and moose.

Based on study of the Flint Run Archaeological Sites, near Front Royal, archaeologist William Gardner has argued that the Paleoamericans in the area lived in a centralized base camp, with outlying camps established to undertake specialized tasks such as stone quarrying; reduction, or removal of unwanted portions, of stone for easier transport; gathering of food or other nonstone resources; and hunting. After examining certain kinds of stone points found across Virginia, archaeologist Randolph Turner identified two large settlement areas in Dinwiddie and Mecklenburg counties, with smaller groupings in the Flint Run and Saltville areas. These clusters are consistent with the location of high-quality stone and other natural resources such as salt in the Saltville Valley of Smyth and Washington counties. It’s possible, then, that the Paleoamericans were nomadic hunter-gatherers who nevertheless stayed relatively close to certain valued resources. It’s also possible, based on archaeological findings, that they were more mobile than that, banding together in small groups, staying in campsites for only short periods of time, and leaving behind little evidence of themselves. 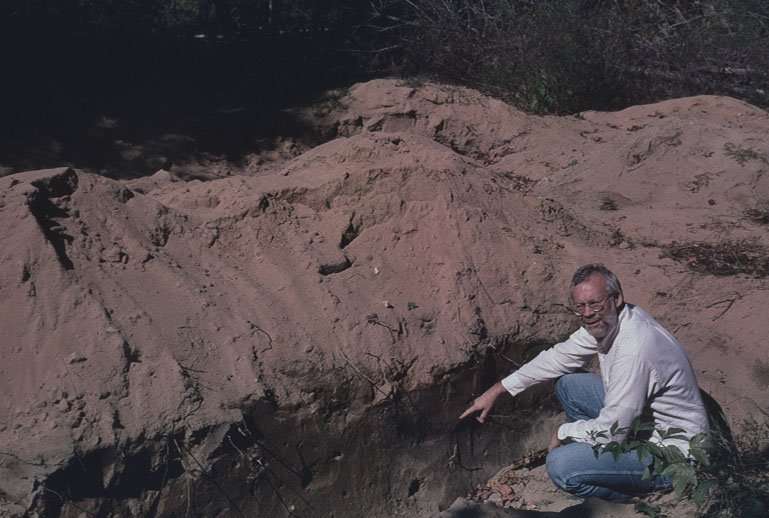 Some researchers have suggested that Paleoamericans located their camps near outcrops of jasper and other high-quality stones, the better to make their tools. Others have argued that while such stone sources were important, they don’t fully explain site location. Regardless, certain distinctive attributes are evident in the lithic technology of the period. The pre-Clovis people at Cactus Hill used fine-grained quartzite and local chert—a crystalline, sedimentary rock that may contain small fossils—to make cores from which blades, or stone flakes at least twice as long as they are wide, were removed. A slightly later pre-Clovis component produced smaller blades and thin triangular spear points without flutes, or grooves, down the center of the point. These blades likely were attached to bone or wooden handles and used to scrape hides, while the points were used as projectiles to hunt game.

Clovis points are most commonly characterized by large lanceolate bifaces with a distinctive flute removed down both faces, a design comparable to points found in the western United States. A majority of these Virginia fluted points were produced from some form of chert, while other raw materials, such as jasper and quartzite, were used in specific areas where they were available. Pre-Clovis, Clovis, and later Paleoindian Period points were all used as spear tips, although investigations at Cactus Hill suggest they also were used to process a variety of animals, including bison or musk ox, elk, deer, and rabbit. One notable nonstone finding was made at the Thunderbird Archaeological Site near Front Royal: postmolds defining some form of structure or structures that date to sometime in the middle of the Paleoindian Period.

As hunter-gatherers, Paleoamericans likely lived in small groups of thirty to fifty members. They might have deliberately interacted with other groups to exchange resources and find mates or they may have encountered them accidentally during their travels. Two archaeological sites in Virginia—Brook Run in Culpeper County and Williamson in Dinwiddie County—show evidence of repeated use likely for the extraction of jasper at Brook Run and chert at Williamson. Researchers also found a wide variety of nonlocal raw materials at Williamson, suggesting either trade between groups or the movement of groups from several different areas to this central location.

These groups of Paleoamericans were most likely egalitarian, meaning that they had no central leadership. Instead, a member’s status was based on age, sex, or individual abilities (as a hunter or a healer, for instance). No individual was allowed to go hungry or to be denied basic resources for survival, and all members contributed to the group’s well-being. It also seems likely that Paleoamericans practiced animistic religion, in which a spiritual essence is assigned to natural forces such as fire, water, thunder, mountains, and animals, sometimes giving them power over humans. Later Virginia Indians practiced something similar.