Domesticated animals are species that humans have deliberately controlled and bred for their own purposes, as opposed to wild animals that are collected and put to use. Animals that are good candidates for domestication—in other words, that are social, hierarchical, appropriate for the human diet, and themselves have diets for which humans can easily provide—were in short supply in the Eastern Woodlands. The last available North American members of the horse, pig, and camel families became extinct by the end of the last Ice Age, or more than 10,000 years ago. The surviving members of the cow, goat, and sheep families—for instance, bison, mountain goat, and mountain sheep—did not live in the hunting range of Virginia Indians and were not good candidates for domestication in any case. 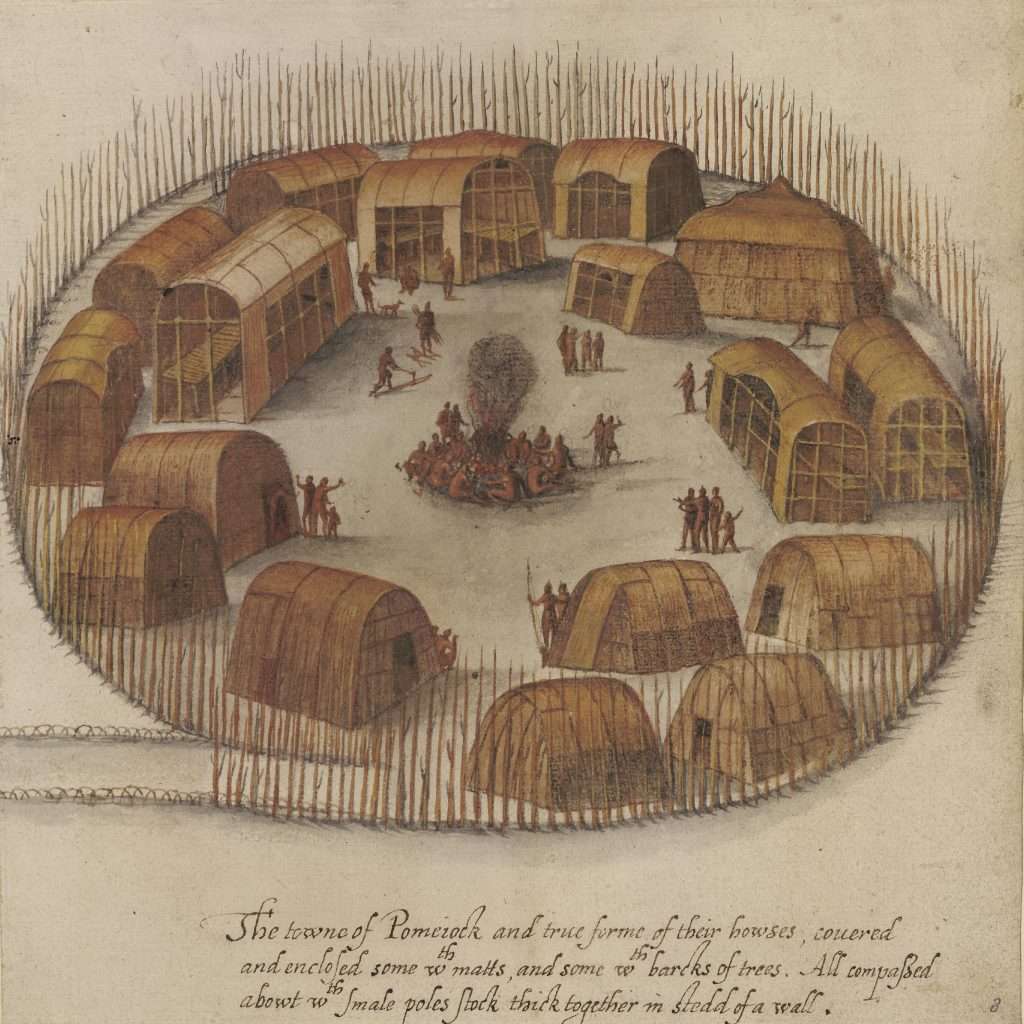 The Virginia Indians did, however, breed dogs. An understanding of these animals can be derived from thee sources: written descriptions left by English colonists, archaeological finds, and a 1585 painting by John White, governor of the 1587 colony at Roanoke and an artist who painted the people and places he encountered. The work depicts a circular town called Pomeiooc in the Carolina Sounds region, which is home to linguistic relatives of the Powhatan Indians. A single, tiny dog can be seen above and to the left of the central fire. Tawny in color, it has small, upright ears, a medium-length snout, and a slightly curved tail.

Other sources confirm what the painting suggests about Indian dogs more generally: that their hips were about knee-high on a human adult and their weight averaged a little more than twenty pounds, with males being somewhat larger and heavier than females. The Jamestown colonist Peter Winne compared these animals to England’s warrener’s dog or rabbit dog. (A Shetland sheepdog would be a modern equivalent.) Archaeological evidence has yielded no proof that that the dogs were specialized; remains show no extra-strong jaws or shorter, stouter forelimbs designed for digging after burrowing prey. The Jamestown colonist John Smith noted that the dogs howled rather than barked, but that this was their only wolflike trait. They lacked the long, narrow snouts of wolves and coyotes.

Winne wrote that the Powhatans used their dogs only in hunting land fowl such as wild turkey and that otherwise “there is nothing tame about them.” Another Englishman, William Strachey, added that they lived away from people’s houses, often in places where the dead were buried. In other words, they were not kept as pets, although there may have been exceptions, as documented elsewhere in North America. Some dog skeletons excavated from the Hatch Archaeological Site in Prince George County, formerly within the territory of the Weyanock (also spelled Weyanoke) Indians of paramount chief Powhatan‘s chiefdom, show broken bones, healed and otherwise. These may indicate rough treatment dealt to animals that attempted to steal human food. One skeleton from the same site suggests that a dog had devoured part of a turtle; its bones were still in the dog’s abdomen and may have caused the dog’s death.

The Powhatan Indians did not eat their dogs, as did some northern tribes, notably the Five Nations Iroquois; however, they may have sacrificed them ritually, a practice recorded elsewhere in North America. At the Hatch site, not all dogs were buried in trash pits. Some were buried in separate graves along with severed human arms, a practice that may have been associated with the taking of trophies from enemies, as described by Smith, who mentioned “the hand of their enemy, dried.” One dog at the site was buried along with a full human skeleton: it was curled up into a sleeping position and placed on top of an elderly woman’s feet. A pot was then placed over the dog. The dog’s skeleton shows no sign of trauma; if it was killed as part of the woman’s funeral, the method of killing left no marks. 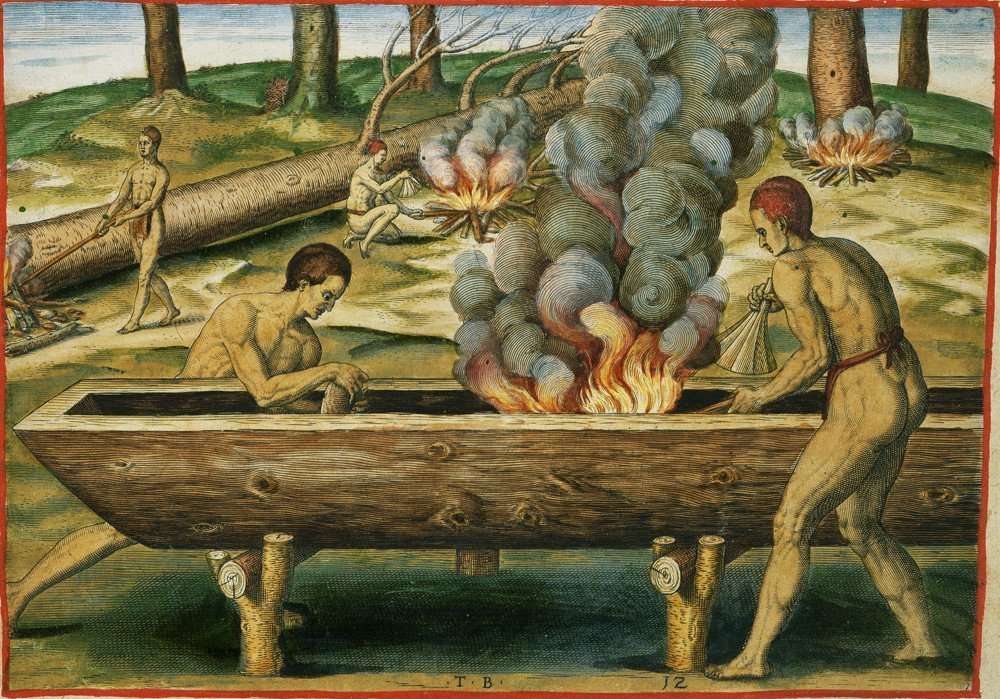 Virginia Indians lacked the pulling power of large domesticated animals such as horses and oxen; they also lacked metal tools. As a result, they were limited in the amount of large-scale, heavy work they could do. Without heavy draft animals they were unable to practice plow agriculture. They could, however, perform limited work with big logs, such as canoe making. House frames were constructed out of saplings instead of logs. English colonists developed the impression that the Indians they encountered were “lazy” or “backward.” Only colonists who came to know the Indians well realized that the opposite was true.

Having only their own bodies and their ingenuity with which to work, the Indians cleared small fields and planted multiple crops in them. (Known as intercropping, this gentle-on-the-land method continues to be used in tropical regions of the world.) The species of corn, beans, and squash the Indians grew did not require plows and draft animals. Even so, such work exacted a physical toll on the Indians. Though their men and women displayed strength and endurance that amazed the colonists, skeletal studies have shown that many of them began developing arthritis in their thirties. 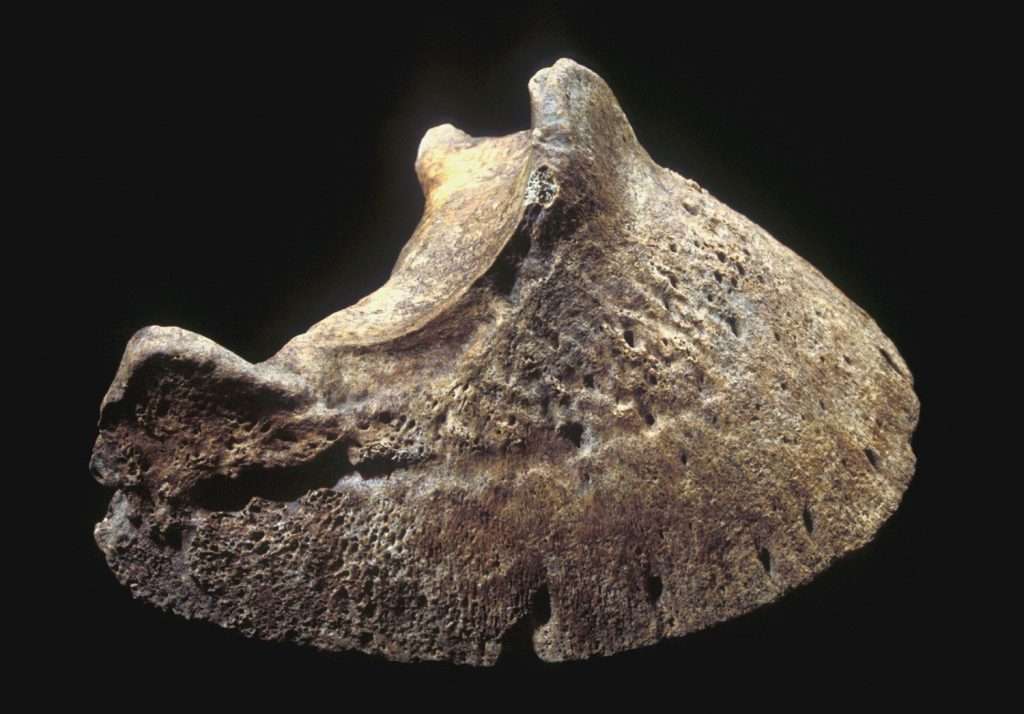 Confronted with European domesticated animals such as horses, cows, goats, and pigs, all of which had arrived in the colony by 1611, the Powhatan Indians initially were awed. Samuel Purchas, the English travel writer and editor, related the observation of John Smith: “they seeing one of the English boars in the way [path], were stricken with awful fear, because he bristled up himself and gnashed his teeth, and [they] took him for the god of the swine, which was offended with them.” Their fear of a full-sized boar was understandable, and their attribution of religious significance to its behavior accords with the direct observations of Smith himself, who wrote, “all things that were able to do them hurt beyond their prevention, they adore with their kind of divine worship.”

Powhatan Indians confronted wild boar in the forest because the English colonists had turned their pigs loose to forage. And those pigs thrived because, prior to being domesticated in the Old World, they had been forest animals. Other large European domesticated animals were native to grasslands and so did not do well without good pasturage. This meant clearing and fencing land. Because Indians were reluctant to manipulate their land in this way, they were equally reluctant to adopt most European domesticated animals (except for pigs) until well into the eighteenth century.

Rather than clear and fence land, bring fodder (animal feed), and muck out pens, Indian men preferred to hone their hunting skills by adding another feral animal to their list of prey. Many English colonists followed suit. Because tobacco farming was so labor-intensive, they skimped on caring for the hogs and instead let them fend for themselves, either hunting them as needed or hiring Indians to do it. Eventually there was trouble. Both Indians and Englishmen were hunting feral pigs that were still claimed by “owners”; English colonists earmarked their pigs, but the Indians didn’t. By the 1690s, the Virginia government assigned earmarks for pigs owned by the residents of various Indian towns.