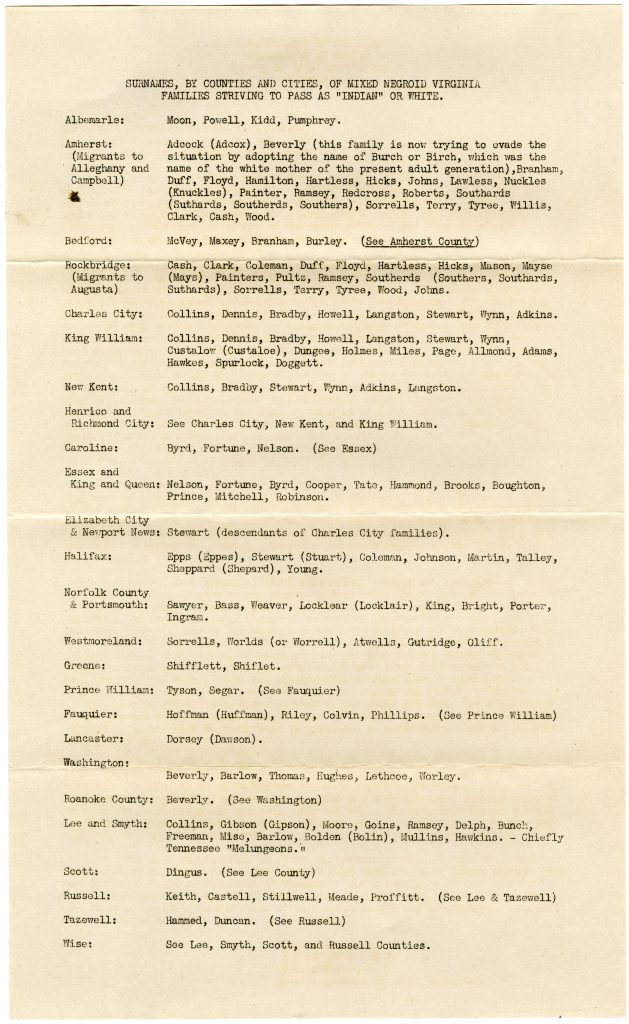 Surnames, by Counties and Cities, of Mixed Negroid Virginia Families Striving to Pass as Indian or White (ca. 1943)

COMMONWEALTH OF VIRGINIA
Department of Health
Bureau of Vital Statistics

To Local Registrars, Clerks, Legislators,
and others responsible for, and interested
in, the prevention of racial intermixture:

In our January 1943 annual letter to local registrars and clerks of courts, with list of mixed surnames, we called attention to the greatly increased effort and arrogant demands now being made for classification as whites, or at least for recognition as Indians, as a preliminary step to admission into the white race by marriage, of groups of the descendants of the “free negroes,” so designated before 1865 to distinguish them from slaves.

According to Mendel’s law of heredity, one out of four of a family of mixed breeds, through the introduction of illegitimate white blood, is now so near white in appearance as to lead him to proclaim himself as such and to demand admission into white schools, forbidden by the State Constitution. The other three find it more difficult to make the grade. As a climax of their ambition, colored people of this type are applying for licenses to marry whites, or for white licenses when intermarrying amongst themselves. These they frequently secure with ease when they apply in a county or city not the home of the woman and are met by a clerk or deputy who justifies himself in accepting a casual affidavit as the truth and in issuing a license to any applicant regardless of the requirement of Section 5099a, Paragraph 4, of the Code. This Section places the proof upon the applicants, not upon the clerks. We have learned that affidavits cannot always be accepted as truth. This loose practice (to state it mildly) of a few clerks is now the greatest obstacle in the way of the proper registration by race required of the State Registrar of Vital Statistics in that Section. Local registrars, who are supposed to know the people of their registration areas, of course, have no excuse for not catching false registration of births and deaths.

In my cases negroids have white marriage certificates, while the Bureau demands correct legal registration as to race when their children’s births are reported. Armed with the clerk’s marriage certificate, they leave home and easily pass as white, when a birth certificate with the pedigree on the back is not required. They are even threatening legal action against the State Registrar but have difficulty in securing a lawyer if he first applies to the Bureau of Vital Statistics for the facts.

The Virginia Bureau of Vital Statistics, through the exceptional, painstaking, and laborious work of the high trained genealogist whom it is fortunate in having, has made a study by groups and families of the principal borderline aspirants for racial change. The chief sources of information are the early birth and death records, made by tax assessors from 1853 to 1896; marriage records from 1853 to date; United States Census reports for 1830, 1850, and 1870, especially a printed list of free negroes by counties from the 1830 Census; county tax-payer lists by races, now in the State Library, which have been studies back to 1808; and, not of least value, their own proclamation of race made by applicants for registration as voters, made soon after the War Between the States, to United States military authorities, now preserved in the State Library. The progenitors of the present would-be whites then marched up voluntarily and registered, for the first time in the life of their race in Virginia, as negro voters—not as Indians, not as whites.

Public records in the office of the Bureau of Vital Statistics, and in the State Library, indicate that there does not exist today a descendant of Virginia ancestors claiming to be an Indian who is unmixed with negro blood. Since our more complete investigation of all of these records and the statements (mostly signed) of numerous trustworthy old citizens, many now dead, all preserved I our “racial integrity” files, no one has attempted by early recorded evidence to disprove this finding. If such evidence exists, our research worker would have found it.

One weak point, which is giving us endless trouble, is the fact that many birth certificates since 1912 have, without realization of future danger, been accepted with false registration as “Indian.” Not a few, when we were off our guard, have slipped by as white. The General Assembly should empower us to state the recorded pedigree on the backs of such certificates and transcripts, to protect those desiring the truth now and in the future.

An act declaring who shall not bear office in this country (October 1705) An act declaring what persons shall be deemed mulattoes (October 1785) General Provisions as to Slaves (1860) An Act to amend and re-enact the 9th section of chapter 103 of the Code of Virginia for 1860 (1866) An Act to amend and re-enact section 49 of the Code of Virginia, 1887 (1910) Colored Persons and Indians Defined (1924) Atha Sorrells v. A. T. Shields, Clerk, Petition for Mandamus (November 14, 1924) Letter from Walter A. Plecker to Turner McDowell (September 27, 1937) Surnames, by Counties and Cities, of Mixed Negroid Virginia Families Striving to Pass as “Indian” or White by Walter A. Plecker (ca. 1943)