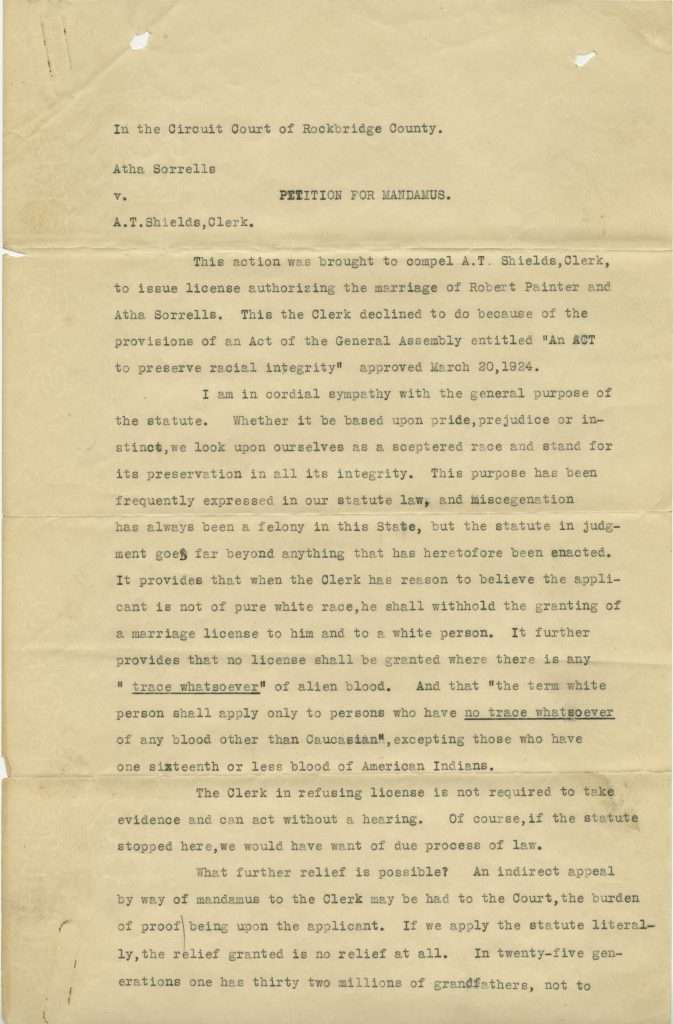 In the Circuit Court of Rockbridge County.

This action was brought to compel A.T. Shields, Clerk, to issue license authorizing the marriage of Robert Painter and Atha Sorrells. This the Clerk declined to do because of the provisions of an Act of the General Assembly entitled “An ACT to preserve racial integrity” approved March 20, 1924.

I am in cordial sympathy with the general purpose of the statute. Whether it be based upon pride, prejudice or instinct, we look upon ourselves as a sceptered race and stand for its preservation in all its integrity. This purpose has been frequently expressed in our statute law, and miscegenation has always been a felony in this State, but the statute in judgment goes far beyond anything that has heretofore been enacted. It provides that when the Clerk has reason to believe the applicant is not of pure white race, he shall withhold the granting of a marriage license to him and to a white person. It further provides that no license shall be granted where there is any “trace whatsoever” of alien blood. And that “the term white person shall apply only to persons who have no trace whatsoever of any blood other than Caucasian”, excepting those who have one sixteenth or less blood of American Indians.

The Clerk in refusing license is not required to take evidence and can act without a hearing. Of course, if the statute stopped here, we would have want of due process of law.

What further relief is possible? An indirect appeal by way of mandamus to the Clerk may be had to the Court, the burden of proof being upon the applicant. If we apply the statute literally, the relief granted is no relief at all. In twenty-five generations one has thirty two millions of grandfathers, not to

speak of grandmothers, assuming there is no intermarriage. Half the men who fought at Hastings were my grandfathers. Some of them were probably hanged and some knighted. Who can tell? Certainly in some instances there was an alien strain. Beyond peradventure I cannot prove that there was not, and so the relief granted by appeal is no relief at all, nor would the results be different if we were to treat the Clerk as a court with power to enter final judgment. The statute makes no provision for appeal from the Clerk.

There is no inhibition against the intermarriage of those who are unable to prove absence of a trace of blood of stock prohibited, and since nobody can prove this, we find ourselves where we were in the beginning. Alice herself never got into a deeper tangle.

Again, the statute undertakes to define with accuracy who are white and says that they only are white who are of pure Caucasian blood. That is a definition which in the present state of Ethnology has no certain meaning and no meaning upon which two authorities agree. The Americanna, Vol 10, page 530, Ethnology; Oxford Dictionary, Vol II, 1893; Caucasian Century Dictionary; Outline of Science by J. Arthur Thompson, Ethnology, Vol 4, page 1095, 1922; Encyclopedia Britannica, 11th edition, 1911, Anthropology, Vol. 11, page 113. IT would be easier to determine who are “pure Anglo-Saxons”

Phoenician and Iberian, Roman and Saxon, Norman and Dane, and into it all has filtered the unknown strains of Asiatic incursions, homogenous only through the long processes of time that have made us what we are; even our lost h [sic] is witness of another line, for be it remembered the inhibition written into the statute is not confined to negroid blood. Hungarians are not Caucasians and a daughter of Kasouth, were she still in the flesh, would be astonished to find that she could not marry a white man in Virginia, as would that daughter of a distinguished New York family who not many years since contracted an alliance with a Hungarian nobleman. Their astonishment would not be 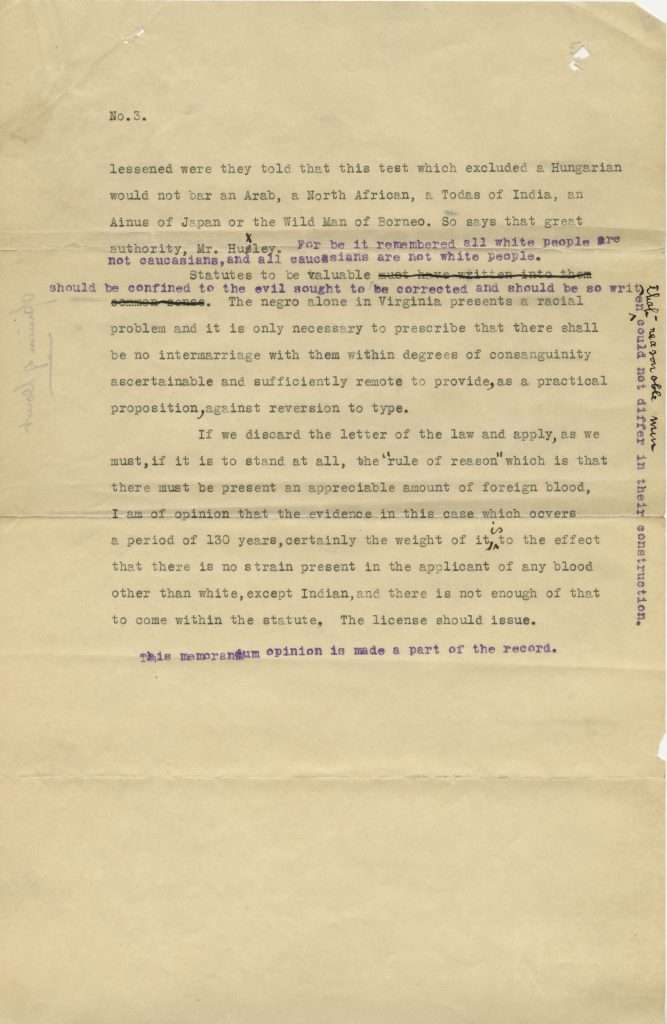 lessened were they told that this test which excluded a Hungarian would not bar an Arab, a North African, a Todas of India, an Ainus of Japan or the Wild Man of Borneo. So says that great authority, Mr. Huxley. For it be remembered all white people are not caucasians, and all caucasians are not white people.

Statutes to be valuable should be confined to the evil sought to be corrected and should be so written that reasonable men could not differ in their construction. The negro alone in Virginia presents a racial problem and it is only necessary to prescribe that there shall be no intermarriage with them within degrees of consanguinity ascertainable and sufficiently remote to provide, as a practical proposition, against reversion to type.

If we discard the letter of the law and apply, as we must, if it is to stand at all, the “rule of reason” which is that there must be present an appreciable amount of foreign blood, I am of opinion that the evidence in this case which [co]vers [sic] a period of 130 years, certainly the weight of it is to the effect that there is no strain present in the applicant of any blood other than white, except Indian, and there is not enough of that to come within the statute. The license should issue.

This memorandum opinion is made a part of the record.