Walter Ashby Plecker was born in Augusta County, Virginia, on April 2, 1861, the son of a well-to-do merchant and slave owner. In 1880 Plecker graduated from Hoover Military Academy in Staunton, Virginia, and earned his medical degree from the University of Maryland Medical School in 1885. Plecker worked as a country doctor in western Virginia and the coalfields of Alabama before settling in Elizabeth City County, the area that is now Hampton, Virginia, in 1892. In 1902 he became the public health officer for Elizabeth City County. He took a special interest in delivering babies; educating midwives; developing a simple, use-at-home incubator; and working to reduce by half the 5 percent birth–mortality rates among the poor. Plecker distributed silver nitrate to be administered to the eyes of newborns, a procedure that helped reduce incidences of syphilitic blindness. He also kept records to search for ways to improve birthing, a goal made more difficult by the fact that most people were born (and died) at home.

In 1912 Virginia lawmakers established the Bureau of Vital Statistics and designated Plecker to serve as its head. The bureau ensured that from 1912 onward, all babies born in Virginia received birth certificates and that the certificates included racial designations, usually supplied by the midwives who delivered the babies. Plecker’s goals as registrar were initially laudable: he kept midwives under close supervision to make sure their procedures were sanitary. When Virginia passed the Racial Integrity Act in 1924, however, the focus of his scrutiny changed from hygiene to racial classification. 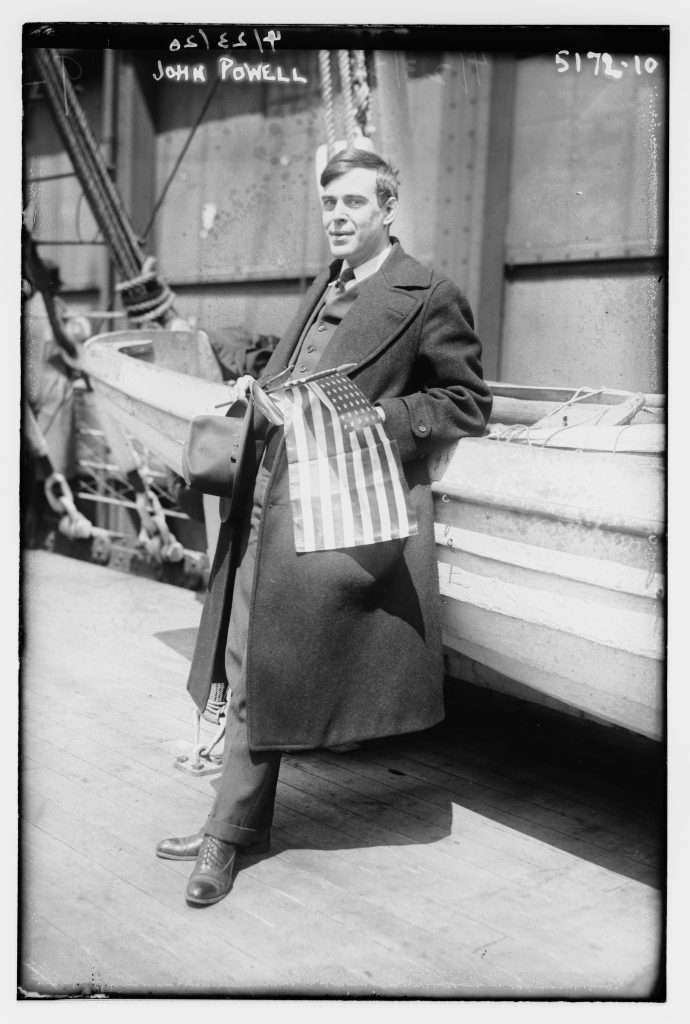 During the 1920s, Walter Plecker became an advocate of the pseudoscientific claims of eugenics. The word, coined in 1883 by Francis Galton, a cousin of Charles Darwin, means “well born.” Eugenicists argued that racial and genetic purity resulted in a more stable society. The latter could be obtained by restricting the parental rights of the developmentally disabled, or “feebleminded,” as Virginia did when it sterilized Carrie Buck. (The U.S. Supreme Court allowed the state to proceed with the sterilization in its 1927 decision in Buck v. Bell .) To obtain the former, the state enacted strict segregation laws and a prohibition on intermarriage. At its height of popularity in the first half of the twentieth century, eugenics was used by Adolf Hitler in Nazi Germany to justify the marginalization and, eventually, the killing of European Jews. In Virginia, it provided a scientific rationale for white supremacy, a movement that in part sought to restore the antebellum social order of white authority and black subservience. To this end, eugenics conveniently “proved” that whites belonged to the master race and that race mixing would fatally undermine their authority.

Together with John Powell, a renowned pianist from Richmond who founded the Anglo-Saxon Clubs of America, and Earnest Sevier Cox, another white supremacist and author of White America (1923), Plecker successfully advocated for the Virginia General Assembly to pass the Racial Integrity Act of 1924. The legislation prohibited whites from marrying non-whites, and explicitly defined racial classifications: “The term ‘white person’ shall apply only to such person as has no trace whatever of any blood other than Caucasian.” All others were “colored.” In addition, the law asked people to voluntarily register their racial identity with the Bureau of Vital Statistics, making the falsification of one’s racial identity, or “color,” on a marriage license or birth certificate a felony offense punishable by up to one year in prison.

As director of the Virginia Bureau of Vital Statistics, Plecker was charged with enforcing the new law. He did so zealously, instructing clerks to “withhold the granting of the license until satisfactory proof is produced that both applicants are ‘white persons.'” Registration with the bureau was voluntary; it was necessary, however, in order to enroll in school, register for the draft, or marry. Birth certificates with a racial designation also became required. 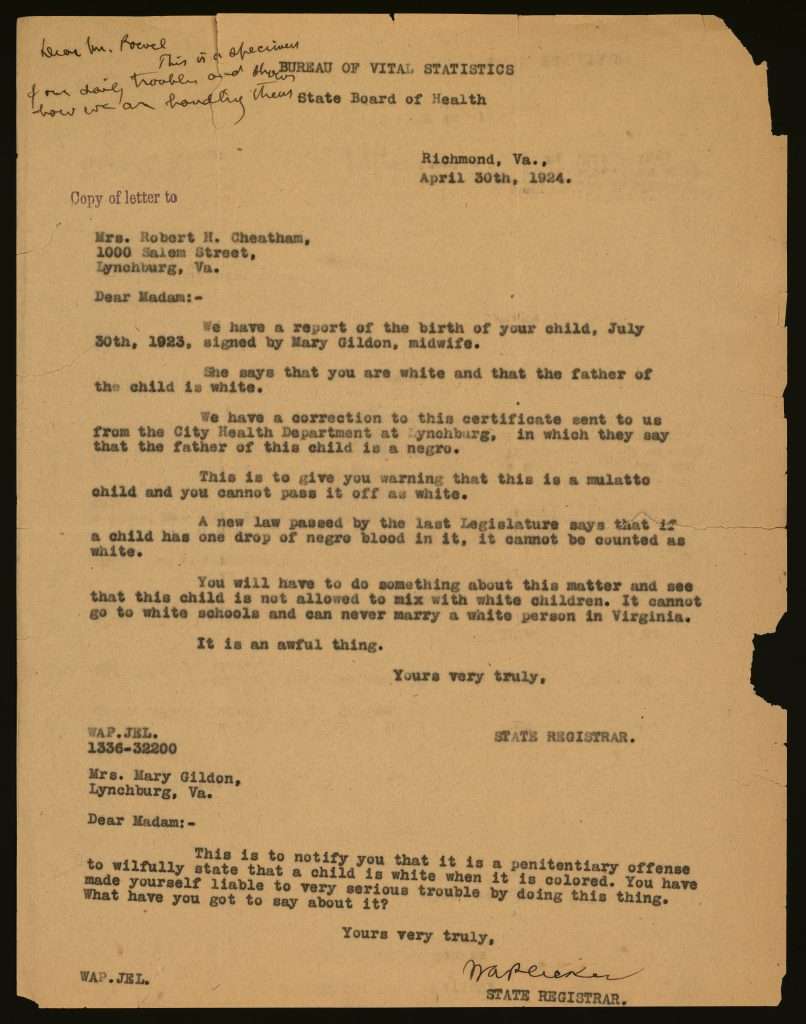 Bureau of Vital Statistics letter from Walter A. Plecker

To promote the new law, Plecker published pamphlets and journal articles, gave speeches to the American Public Health Association and Southern Medical Association, and presented lectures—all praising Virginia for taking the lead in preserving racial purity. He described the Racial Integrity Act as “the most perfect expression of the white ideal, and the most important eugenical effort that has been made in 4,000 years.” Concerned that some mixed-race Virginians would attempt to “pass” as white, Plecker personally communicated warnings to some new mothers. For example, in 1924 he informed a new white mother that her child’s father was, in fact, “negro” and not white:

This is to give you warning that this is a mulatto child and you cannot pass it off as white. A new law passed by the last legislature says that if a child has one drop of negro blood in it, it cannot be counted as white. You will have to do something about this matter and see that the child is not allowed to mix with white children, it cannot go to white schools and can never marry a white person in Virginia.

It is an awful thing.

The language of the law gave Plecker wide discretion in determining a person’s race. A white person, according to the General Assembly, was someone with “no trace whatever” of non-white blood; a “trace” could be determined by anything from physical features to family names.

The Racial Integrity Act allowed for one exception to the definition of “white person.” Because many eminent white Virginians considered themselves to be descendants of Pocahontas and John Rolfe, the law allowed for those who had “one sixteenth or less of the blood of the American Indian and have no other non-Caucasic blood [to] be deemed to be white persons.” Plecker feared that this loophole encouraged mixed-race Virginians, who had an interest in passing as white, to claim they were Indians. He therefore determined that “there are no native born Virginia Indians free from negro intermixture.” According to Plecker and through him the Commonwealth of Virginia, all Indians were now “colored” and not able to claim Indian identity.

This put Virginia Indians in a bind. “Perhaps owing to a recognition of the oppressed status of blacks, Indians did not want to be classified as colored,” the scholar J. Douglas Smith has written. “They did not want to be white, but they wanted access to the privileges of whites.” They were now forced to attend all-black schools, however, whose substandard quality the U.S. Supreme Court recognized years later in Brown v. Board of Education of Topeka, Kansas (1954), a decision that desegregated public education.

In 1930 the General Assembly updated the Racial Integrity Act to define a white person using the “one-drop” rule. Now, a “colored” person was anyone “in whom there is ascertainable any Negro blood.” Already believing that all Virginia Indians were in part African American, Plecker now had the go-ahead to officially classify Indians as “colored” and, in effect, define them out of existence. He applied to this process the smooth polish of scientific rationalism. In the Washington Post on January 6, 1945, he described his efforts at “tracing very carefully the ethnology of the so-called Indians in Virginia. We have been able to trace many of the persons now asserting themselves as Indians back to census records of 1830, where their ancestors were listed as free Negroes.” He went on to assert that “there are no descendants of Virginia Indians claiming or reputed to be Indians who are unmixed with Negro blood.”

Birth certificates prior to 1924 allowed “Indian” to be used as a racial classification. To address this potential loophole in the law, Plecker initially emended “Indian” certificates by handwriting “colored” on the back. Later he formalized the process, typing messages that included warnings to anyone who would claim a racial identity other than the one hereby assigned by the state.

In 1943 Plecker continued to worry about the effects of race mixing and intermarriage. In a January letter to local registrars, he warned against “mongrel” families (elsewhere he described them as “rats”) who were passing as white and using falsified birth certificates “as an aid to intermarriage into the white race and to attend white schools.” He accused these people of refusing to register for the draft—a serious charge during wartime—and cited the case of three Caroline County men who declared that their willingness to obey the draft law was contingent upon the state reclassifying them from “Negro” to “Indian.”

Concerned that his midwives and registrars were not vigilant enough in identifying the families behind the “organized propagation of this racial falsehood,” Plecker announced “a list of their surnames by counties and cities, as complete as possible at this time,” that could be used to identify African Americans. “This list should be preserved by all,” he wrote, “even by those in counties and cities not included, as these people are moving around over the State and changing race at the new place.” He sent instructions to clerks of courts, hospital personnel, school administrators and others, informing them that persons with these names were not to associate with white people.

That such practices seemed to mimic Adolf Hitler’s treatment of European Jews was not lost on Plecker, who thought that Virginia compared favorably to Germany in terms of its record keeping. In a 1943 letter to John Collier, the U.S. commissioner of Indian affairs, he bragged that the state’s records trace racial ties back to 1853: “Your staff member is probably correct in his surmise that Hitler’s genealogical study of the Jews is not more complete.”

Plecker retired from the Bureau of Vital Statistics in 1946 after thirty-six years as its director; he died in Richmond on August 2, 1947, after being hit by a car. He was buried in Hollywood Cemetery. In 1967 the U.S. Supreme Court, in Loving v. Virginia, ruled the Racial Integrity Act unconstitutional and lifted Virginia’s ban on interracial marriage. Plecker’s insistence on classifying Indians as African Americans, meanwhile, complicated Virginia Indians’ efforts to gain state and federal recognition, along with the accompanying levels of sovereignty and self-governance. In 1997 Virginia governor George Allen simplified the process of correcting birth certificates, but Plecker’s legacy is a bitter one for many. “He came very close to committing statistical genocide on Native Americans in Virginia,” Chief William P. Miles of the Pamunkey tribe told the Richmond Times-Dispatch in March 2000.

RELATED CONTENT
Categories:
Type:
Related SOLs:
MAP
TIMELINE
April 2, 1861
Walter Ashby Plecker is born in Augusta County.
1880
Walter Plecker graduates from Hoover Military Academy in Staunton.
1885
Walter Plecker earns his medical degree from the University of Maryland Medical School.
1902
Walter Plecker becomes the public health officer for Elizabeth City County.
1912
Walter Plecker is named the state registrar for the Virginia Bureau of Vital Statistics. He ensures that all babies born in Virginia receive birth certificates.
March 20, 1924
Governor E. Lee Trinkle signs "An act to Preserve Racial Integrity," a law aimed at protecting whiteness on the state level. It prohibits interracial marriage, defines a white person as someone who has no discernible non-white ancestry, and requires that birth and marriage certificates indicate people's races.
March 4, 1930
Governor John Garland Pollard signs into law a bill that would redefine a "colored person" as having any "negro blood."
January 1943
Walter Plecker issues a letter to local registrars identifying surnames he claims belong only to "mongrel," or mixed-race, families. He suspects these families of being African American but passing as white.
1946
Walter Plecker retires from the Bureau of Vital Statistics after thirty-six years at its head.
August 2, 1947
Walter Plecker dies in Richmond after being hit by a car. He is buried in Hollywood Cemetery.
June 12, 1967
In Loving v. Virginia, the U.S. Supreme Court unanimously rules that Virginia's antimiscegenation statutes violate the Constitution's Fourteenth Amendment. The decision effectively overturns the bans on interracial marriage in sixteen states.
1997
Fifty years after Walter Plecker's death, Governor George Allen makes correcting birth certificates easier for Virginia Indians.
June 3, 2009
The Federal Recognition Act of 2009 passes the U.S. House of Representatives. The bill, which would extend federal recognition to six Indian tribes in Virginia, must still pass the U.S. Senate, but this is the furthest the bill has ever gone.
FURTHER READING
CITE THIS ENTRY