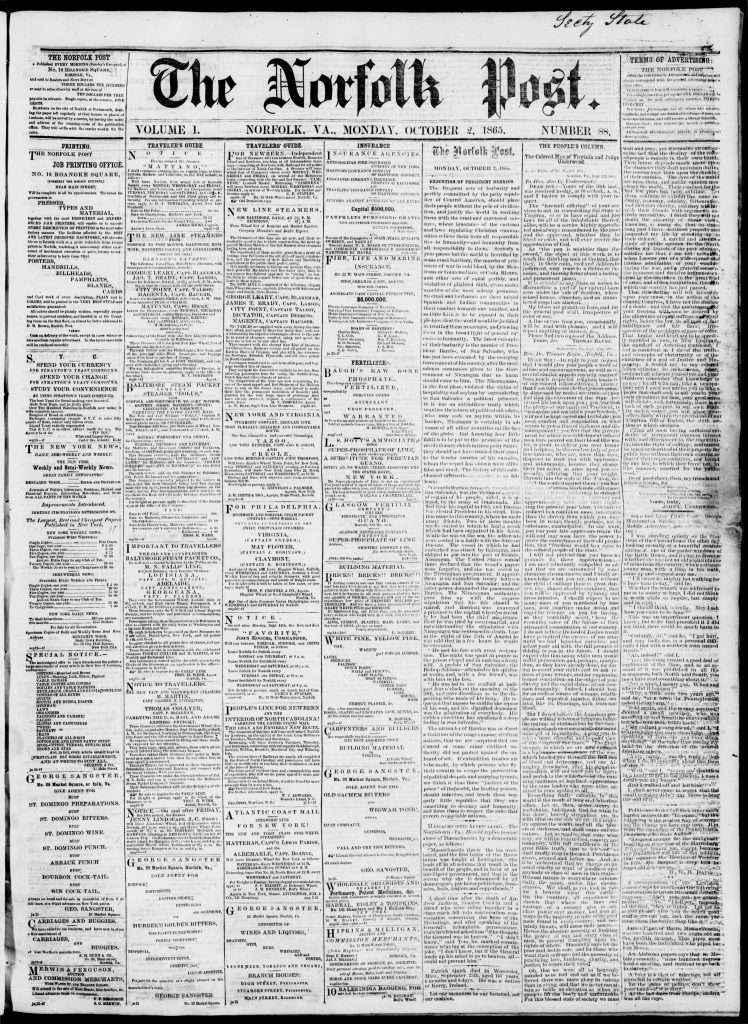 The Colored Men of Virginia and Judge Underwood

The “farewell offering” of your services to aid in remodelling the State of Virginia, so as to have equal and just laws for all of the inhabitants thereof, alike, will be a service highly appreciated and always remembered by the good and the oppressed, whether they be black or white, and will ever receive the approbation of God.

As “the pen is mightier than the sword,” the object of this work is to reach the thinking men of the land, that they, in their calm, cool and deliberate judgment, may come to a righteous decision, and thereby bring about a lasting and permanent peace.

It is suicidal to any State or nation to disenfranchise a part of her natural-born sons under the rule of freedom, where school houses, churches, and an unmolested gospel are allowed.

My labors are gratuitous here, and for the general good of all, irrespective of color or sect.

A line or two from you, occasionally, will be read with pleasure, and I will report anything of interest, &c.,

Dear Sir:―In reply to your request that I would give your people a word of advice and encouragement, as well as to several similar appeals recently received from much respected religious teachers of our colored fellow-citizens, I answer that I am fully sensible that you are greatly distressed by recent occurrences; you feel that the Governor of the State has turned his back upon you; you fear that the pledge of our martyred President, to “recognize and maintain your freedom,” will not be kept sacred and inviolate; you need comfort and consolation in what seems to you a time of darkness and discouragement; you fear that the government for whose re-establishment colored men have poured out their blood like water, is about to deliver you over bound and helpless, to the cruel custody of your late masters, who are, more than ever, disposed to treat you with oppression and inhumanity, because they charge their late defeat in arms upon you especially, affirming that your weight, thrown into the scale of the Union, decided the contest against them; you fear that the infamous black code, still standing on our statute books may be enforced against you, and that, by vagrancy and apprenticeship laws, and laws regulating the price of your labor, you may be reduced to a condition more intolerable than the slavery from which you have been in name, though, perhaps, not in substance, emancipated. In one word, you fear your late oppressors retain the will and may soon have the power to prove the correctness of their old prediction, that “freedom would be a curse to the colored people of the State.”

I will not pretend that you have no grounds for these apprehensions.—I am most reluctantly compelled to admit that we are surrounded by some alarming circumstances; and I freely acknowledge what you say, that without the right of suffrage there is great danger, nay, almost absolute certainty, that you will be oppressed by tyranny and gross injustice. I should expect to see many more of you murdered by base men, now smarting under defeat and eager for revenge on you for having, as they truthfully assert, been the crowning cause of the failure of their attempted assassination of our country. I do not believe the God of Justice would have permitted the success of our arms until we had humbled ourselves and asked your aid with the full promise of fidelity to you in the future. I should expect also that many white men would suffer persecution and, perhaps, martyrdom, as they have already done, for daring to assert your rights and to ask redress of your wrongs, and for expressing honest convictions on the subject of your slavery and the equal claims of our common humility. Indeed, I should look for an endless course of wrongs, retaliations and repeated injuries, filling our land, like St. Domingo, with tears and blood.

But I do not believe the American people are willing to become infamous before the nations of christendom by the commission of such enormous wickedness and unheard of ingratitude. I pray you to take a more cheerful and hopeful view of the “signs of the times.” The great struggle in which we are now engaged is a legitimate consequence of the war, which has led you through the Red Sea of blood and deliverance, and our Almighty Benefactor, after his signal interposition, will not leave you to starve and perish in the wilderness by the cunning craftiness of legalized oppressions by the same leaders who were alike arrayed in arms against us all.

Everything really valuable in this world is the result of long and laborious effort. Let us, then, never weary in well-doing, but thank God for what he has done; bravely struggling on, for with Him on our side we are in a majority against the world, and all the powers of darkness, and shall come out victorious. Let us resolve, that come what may, we will be true to God, country and humanity, with full confidence in the great Bible truth, that as we sow we shall finally reap in the good Providence above, around and before us. And let it be understood that we charge no unusual cruelty or want of goodness upon anybody or class of men in this State.―Human nature is everywhere substantially the same, under like circumstances. We shall, as yet, look in vain for a heaven upon this earth.―On the contrary, all experience has shown that where the laws and customs of a county give to one class power over another, bad men always in the majority, in spite of the good men found in every country, and certainly in ours, will abuse their power.―Hence the absolute necessity of limiting the power of any and every class of men, to prevent trampling upon the rights of others. Humanity says let the poor and feeble vote, and let those who want their suffrages feel the necessity of practicing love, kindness, charity, and justice, to secure their vote.

Oh, that we were all so heavenly minded as to feel and act as if we believed there was more glory in raising than in rising, and that we never can attain so noble an elevation as when we stoop to lift the lowly and unfortunate. For this blessed state of society we must wait and pray, yet it remains an encouraging fact that the destiny of the colored people is mainly in their own hands. Their future depends much more upon the character they shall maintain during the coming year than upon the cunning of their enemies. The eyes of the world are upon them, and public opinion now sways the world. Their conduct for the last few years has been sublime. Let them continue to exhibit the same industry, economy, sobriety, forbearance, and christian charity, and they will furnish their friends with arguments entirely irresistible. I think they will not doubt the sincerity of these views, knowing, as many do, that in times long past I have sacrificed property and jeoparded my life by standing up in their defence. A careful and attentive study of public opinion in the North during my travels of the past summer, satisfies me that I am not mistaken, when I assure you of a wide-spread and intense admiration of your conduct during the war, and a grateful sense of the immense and decisive influence exerted by the freedmen in the great trial of arms, and of free institutions, through which our country has just passed.