sale of his property at auction—threatened by the vigilance committee—saved by delirium tremens. 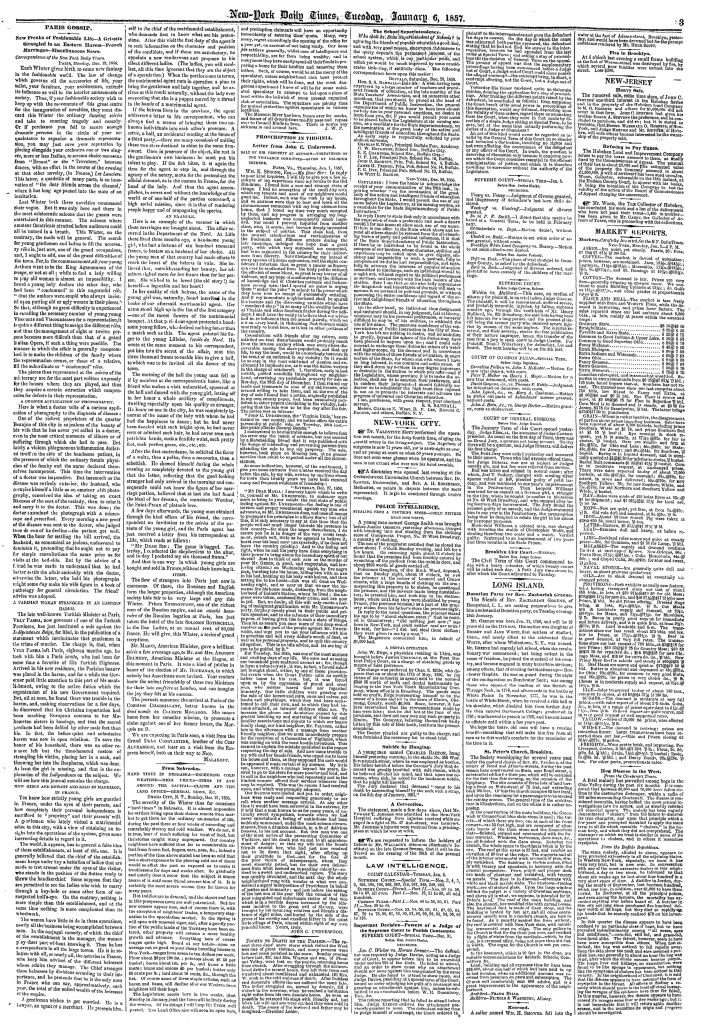 Wm. K. Strong, Esq.—My Dear Sir: In reply to your kind inquiries, I will try to give you a few incidents of my experience since my return to the Old Dominion. I found here a new and strange state of things. I had no conception of the cordiality with which my tenants and most of my neighbors would greet me. Indeed, such was the rush to my house, and so anxious were they to hear and learn all the circumstances connected with my long absence from home, that I found my time very much occupied by them, and my progress in arranging my long-neglected business was consequently much impeded. Nor could I prevent inquiries from another class, who, it seems, had become deeply interested in the subject of politics. This class had, from the mutual criminations and recriminations of the Buchanan and Fillmore orators during the late campaign, indulged the hope that a great party, with which they supposed me connected, had been organized in the country for their deliverance from Slavery. Notwithstanding my hatred of every species of human oppression, and the slight confidence I entertain that so great a cancer as Slavery can ever be eradicated from the body politic without the effusion of some blood, so great is my horror of all violence, and my hope of amelioration by the diffusion of my knowledge and of Christian patience and forbearance among men, that I spared no pains in urging those “under the yoke” to submit to the power which they have now no means of successfully resisting. And if my immediate neighborhood shall be spared the horrors and the distressing [anxie]ties which have “murdered sleep” in so many of the wealthy families of Virginia and other Southern States during the holidays, I shall have the vanity to believe that my advice had more influence than the armed patrols, which we see on every hand, in restraining that violence which was ready to burst here, as it has in other portions of the country.

Consultation with friends after my return, soon satisfied me that disturbances would probably result from the intense anxiety which was everywhere discoverable among the slave population, and that my life, to say the least, would be exceedingly insecure in the event of an outbreak in my vicinity; for it would be as easy in the mad whirlwind of passion and excitement to implicate me, as it was the Salem victims in the charge of witchcraft. I, therefore, early in last month, posted handbills throughout my neighborhood, advertising my perishable property for sale on Monday, the 29th day of December. I then rented my lands and tenements to nine of my old friends, who seemed willing to take them, and on the eve of the day of the sale I found that a notice, originally published in my own county paper, had been extensively published in other papers circulating in the vicinity, indicating that the sale was to be the day after the fair. The notice was as follows:

“John C. Underwood, the ‘Virginia Exile,’ has returned to our county, and we notice offers his entire personality at public sale, on Tuesday, 30th inst.—Berryville (Clarke County) Gazette.”

I endeavored to be charitable enough to believe that the error was the result of mistake, but was assured by a Slaveholding friend that it was published with the design of misleading and preventing persons from attending the sale to buy my property. The sale, however, took place on Monday last, at no greater sacrifice than can be expected under all the circumstances.

As some indication, however, of the excitement, I give you some extracts from a letter received the day before the sale, by my wife, written by one from whom for more than twenty years we have both received many and frequent evidences of friendship:

My Dear Maria: I scarcely know which to write to, yourself or Mr. Underwood, to endeavor once more to bring to your minds the real state of public feeling against Mr. Underwood—the feeling is one of intense and proper resentment against any man who advocates, as Mr. Underwood does, and uses all means to propagate his principles in a Slave State; but of all this, it is only necessary to say at the time that the people will not much longer tolerate his presence in this country—for since the negro disturbance, I do assure you he is in danger of the very worst treatment, (which will, little as he appears to believe it, burst over his head most unexpectedly, if he does not leave the country quickly.) And is the feeling not right, when he and his party have done everything in their power to bring about the incendiary spirit of our slaves? Just to think of such acts at the murder of poor Mr. Green, (a good, and respectable, and law-loving citizen,) on Wednesday night, by five negro men, bursting into his house, killing him with an axe in his bed, hacking up his body with knives, and then setting fire to his house—this was all done on Wednesday night, and so near us that we saw the immense fire his house made, distinctly, from the neighborhood of Gaines’s Station, where he lived; the negroes were taken, confessed their crime, and are now in jail. But, no doubt, all this will only excite a feeling of malignant gratification with Mr. Underwood’s party, for they openly gloat in their public and private speeches, and in the columns of their incendiary papers, of having given rise to such a state of things. Then let us assure you once more of the deep-seated resolves on the part of the people against Mr. Underwood, and urge you to use your influence with him to advertise and sell every dollar’s worth of land, as well as his personal property, and to quit the country altogether. This is no idle advice, and let me beg of you to be guided by it.”

But Tuesday, the 30th, was one of the most anxious and exciting days of my life. We were sad at seeing our household goods scattered around us; for, though in form a voluntary sale, it was, in fact, a forced sale—not brought about, either, by one of those providential events when the Great Father calls an earthly father home to his rest, but, it was forced upon us by the oppression of proud and cruel men, who neither feared God nor regarded humanity. Our little children were grieving over the sale of the horses and colts, cows and calves, pet lambs and playthings, which they had been accustomed to call their own, and to which they had become attached, as farmers’ children often are. To increase the gloom and desolation caused by this general breaking up and scattering of those old and familiar associations and objects to which our hearts fondly clung, our kind neighbor, Mr. Feltner, called late in the afternoon with a message from another friendly neighbor, that we must immediately prepare for the reception of a Committee of Vigilance, which was coming on with the most hostile intentions. This seemed to explain the mistake published in the papers respecting the day of the sale. And now came trouble to my wife and her female friends, who urged me to leave the house and them, as they supposed the mob would be appeased if made certain of my absence. My little son, however, with a courage beyond his years, desired to go to the store for more powder and lead, and to call in the neighbors who had repeatedly and in the kindest manner offered their services whenever they may be required. This was the course I had resolved upon, and which was promptly adopted.

Our firearms were loaded and put in order, neighbors were ready and responding generously to our call, when another message arrived. At any other time it would have been sorrowful in the extreme, for it told that a man known to us for many years, of naturally sweet sympathies, towards whom we had never entertained a feeling of unkindness[,] had been suddenly summoned, under the most solemn circumstances, from a drunken debauch, in a fit of delirium tremens, to his last account. But this man was one of the most active of the persecuting Committee of Vigilance, and his death put an end to all apprehensions of danger; so that my wife and the female friends around her, who had just now resolved not to lie down that night, after offering up their gratitude to God—not for the fate of the poor victim of intemperance, whom they most sincerely pitied, but for their own deliverance from what seemed an impending calamity—retired to a sweet and undisturbed repose. The story was quickly circulated, and the next day the whole neighborhood rung with wonder at what was considered a signal interposition of Providence in behalf of justice and humanity; and just before the setting of the last sun of the year 1856 the remains of this poor misguided and unfortunate victim of that vice which is in a terrible degree increased by the idleness incident to the great evil of Slavery, were brought by his mourning relatives and friends a distance of eight miles, and buried by the side of the grave of his worthy and excellent father in the quiet little village of Paris, almost within sight of my own peaceful home. Yours, truly,