Delaney was born on June 30, 1844, in Amelia County to free parents, Sarah Hughes Delaney and Edmund Delaney. His father, a man of mixed white and black ancestry, worked at various times as a bricklayer and miller and by 1853 owned sixty-six acres of land. In 1862 Alpheus M. Chappell, a local merchant recently elected captain of Company A of the 14th Virginia Infantry Regiment, employed McDowell Delaney as a cook. Delaney also worked as a teamster for the regiment before returning home because of poor health. After the Civil War, he received instruction from his father, who taught at what may have been the first Amelia County school for blacks after emancipation. He likely was the McDowell Delaney who was hired in 1865 to manage property at the Freedmen’s Bureau hospital in Farmville. 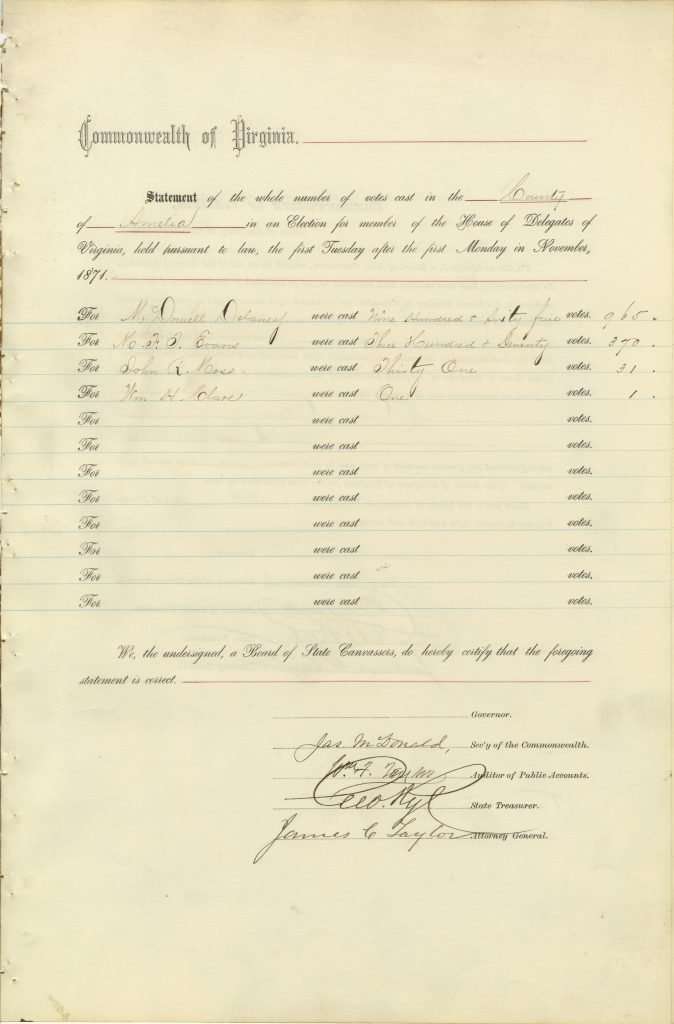 Although not active in Republican state conventions or African American mass meetings, Delaney believed he had gained enough local prominence to seek public office in the first election in which African Americans could vote for members of the General Assembly. On July 6, 1869, however, he finished last in a three-way race for Amelia County’s seat in the House of Delegates. The following year census enumerators recorded Delaney as residing with his parents and working as a laborer. In 1871 he campaigned again to represent Amelia County in the House of Delegates. In the November election Delaney received 965 votes of 1,367 ballots cast in defeating three other candidates to win a two-year term. During the three assembly sessions that met from December 6, 1871, to April 2, 1873, he served on the Committees of Claims and on Retrenchment and Economy.

Delaney introduced several pieces of legislation, including a bill to modify the 1860 state code with respect to offenses committed by African Americans, a bill requiring a license to carry certain weapons, and a resolution calling on the Committee for Courts of Justice to submit a bill repealing laws imposing whipping as punishment. He also joined a majority in House efforts to circumvent the Funding Act of 1871, passed during the previous session, which forced the state to fund high-interest bonds issued for debt contracted during the antebellum years. Settlement of the debt became the most divisive political issue of the 1870s. Delaney’s opposition to the act anticipated the views of the overwhelming majority of other African American voters and politicians, who later allied with the Readjusters, a coalition that sought to repudiate a portion of the public debt and to redirect remaining resources in support of the new public school system and other state institutions. Facing opposition from two other candidates and contending with party divisions, Delaney lost his reelection bid in November 1873 in a contest for which his father was one of the election commissioners.

In June 1872 Delaney appeared before the Amelia County Court as a duly elected justice of the peace for Leigh Township, to serve for three years beginning on July 1. By July 1873 he was also acting coroner and continued in that capacity until at least December of that year. In August 1875 Delaney represented Amelia at a state convention of African Americans held in Richmond. After winning election as constable for his district in May 1876, he resigned as a justice the following month and took the oath for the new office. Having been directed to execute a new bond or show cause why he should not, Delaney failed to appear before the court in January 1877, and his powers as constable were revoked.

Delaney engaged in several vocations. In January 1873 he received a license to operate an ordinary. The county paid him for bridge repairs, and he reportedly taught school for a time. Delaney purchased thirty-seven acres from his father and by 1880 had begun farming. By April 1883 he also had been ordained as a Baptist minister. He served several Amelia County churches, including Chester Grove Baptist Church, as pastor and may have organized an area Baptist association.

On January 29, 1873, Delaney married Mary P. Bolling, of Cumberland County. They had at least two sons and two daughters. Beginning in the 1890s Delaney was a defendant in a chancery cause stemming from a lien against his Amelia County land. The plaintiff attempted to have the property rented out to satisfy the debt, but ultimately the suit was settled in 1907. About 1912 Delaney moved to Cumberland County, where he worked as a blacksmith despite his age. In August 1924 he successfully applied for benefits under a Confederate pension act passed that year. Delaney died of a cerebral hemorrhage in Cumberland County on May 30, 1926, and was buried on family property in the vicinity of Chester Grove Baptist Church, where a monument in his memory was later erected.