Robert Baxter Crawford was born on April 14, 1895, in Buffalo Gap, in Augusta County. He was the son of Robert Lee Crawford and Sallie B. McClintic Crawford. He attended Augusta Military Academy before matriculating in 1914 at the Virginia Agricultural and Mechanical College and Polytechnic Institute (later Virginia Polytechnic Institute and State University), from which he received a two-year degree in agronomy. Crawford served as a second lieutenant during World War I and for about a year managed a 12,000-acre farm in Alabama. He returned to Virginia and worked as an agricultural agent in Clarke and Warren counties. On April 26, 1922, in Martinsburg, West Virginia, Crawford married Regina Lauck Shaffer. They had three daughters and one son.

In 1925 Crawford moved to Farmville to become the agricultural agent for Prince Edward County. Two years later he entered private business and was president of the Kilkare Laundry from then until he retired in 1970. Crawford held leadership positions in several business organizations, including the presidency of a regional laundry owners’ association in 1940 and of the state association in 1943. Active in the American Legion, he held office in his home post, at the state level, and as a member of the national executive and legislative committees, and in August 1946 he was elected to a one-year term as department commander of Virginia. Crawford was a member of the Prince Edward County school board from 1931 to 1946, the last seven of those years as chair, and in 1945 he received a distinguished service certificate as the outstanding school board member in Virginia.

In response to the decision of the U.S. Supreme Court in May 1954 declaring racial segregation in public schools unconstitutional, Crawford and other opponents of desegregation in Virginia’s Fourth Congressional District established the Defenders of State Sovereignty and Individual Liberties, of which he became president in October of that year. Effectively mobilizing segregationists throughout the state, the Defenders organized dozens of chapters and had recruited nearly 12,000 members by 1958. Those members included powerful state legislators and two congressmen from south-central Virginia, Watkins Moorman Abbitt and William Munford Tuck, both major figures in the state’s dominant Democratic political organization led by U.S. senator Harry F. Byrd Sr. In 1955 Crawford also helped found the Federation for Constitutional Government, a short-lived organization seeking to thwart integration across the South, and served on its executive committee.

Vote For the Convention

On June 8, 1955, Crawford unveiled the Defenders’ Plan for Virginia, a package of proposals intended to block enforcement of the Supreme Court’s ruling. The Defenders’ plan would have permitted localities to close public schools threatened with desegregation and allowed white students to enroll in segregated private academies subsidized by state tuition grants. The Defenders recommended amending the state’s constitution and code to eliminate compulsory school-attendance laws, prohibitions on using state money for private tuition grants, and if necessary even the requirement that Virginia provide a statewide system of free public schools. The plan also included a provision to cut off state funds for and to close schools that desegregated. Second only to Crawford’s uncompromising commitment to segregation was his unwavering insistence that the Defenders rely solely on legal and peaceful tactics in resisting desegregation. In that significant respect, the Defenders distinctly differed from pro-segregation groups in other southern states during the turbulent decade following the Supreme Court’s ruling. 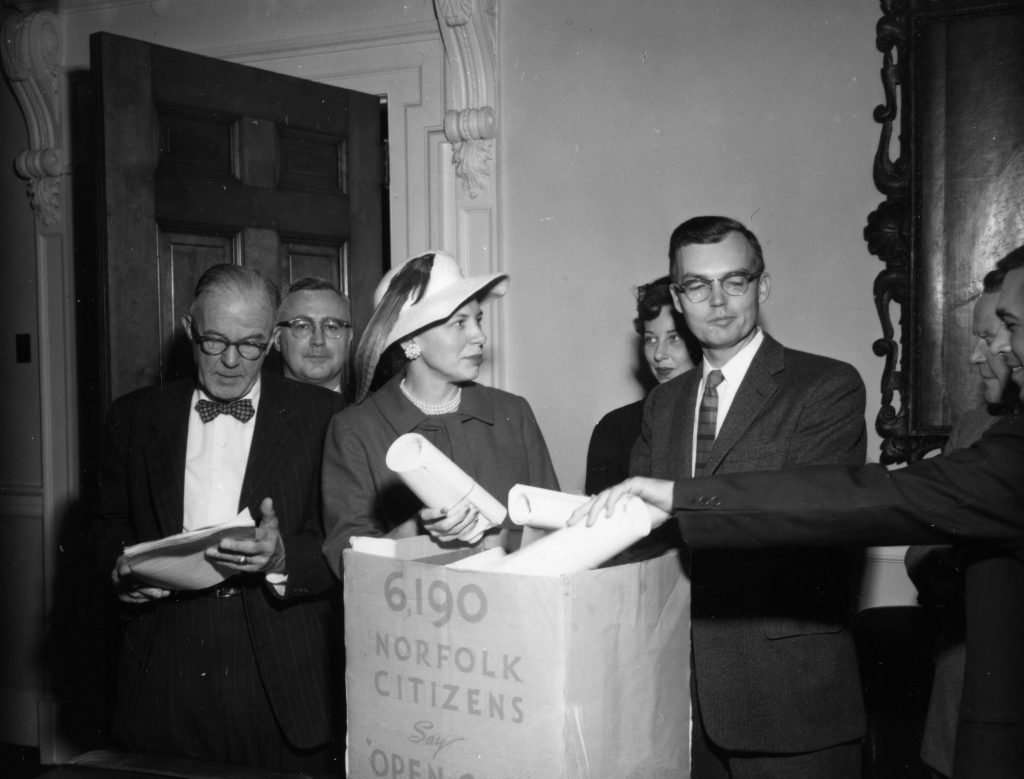 A limited constitutional convention in March 1956 amended the Virginia constitution to allow tuition grants to nonsectarian private schools. At a special session at the end of the summer of 1956 the General Assembly adopted many of the Defenders’ recommendations as the central components of its program of Massive Resistance to the Supreme Court’s orders. In the autumn of 1958 Governor J. Lindsay Almond Jr. enforced the new laws and closed public schools in Charlottesville, Front Royal, and Norfolk that were under court orders to desegregate. The school closings sparked a reaction among business leaders in several cities, and many middle-class white citizens expressed a willingness to accept some desegregation in order to preserve public education. As public support for Massive Resistance receded, the Defenders proved unable to substitute segregated private education for the closed public schools. After both federal and state courts ruled the school-closing laws unconstitutional on January 19, 1959, the governor, who had been elected in 1957 with enthusiastic backing from the Defenders, announced his retreat from Massive Resistance. In April by a narrow majority the General Assembly adopted a plan of limited desegregation.

Crawford and the Defenders felt betrayed. They unsuccessfully attempted to revive Massive Resistance with a Bill of Rights Crusade, which sponsored a rally on March 31, 1959, and by supporting segregationist candidates in the July 1959 Democratic primary. After that year, the Defenders lost their cohesiveness, and only a few chapters continued to operate into the 1960s. Prince Edward County closed its public schools from 1959 to 1964 to avoid desegregation, but the county chapter of the Defenders became moribund as residents focused on raising money for private schools in the county. The State Corporation Commission revoked the Defenders’ charter in 1967. With Massive Resistance defeated and statewide support waning, Crawford had resigned as president of the Defenders by June 1963. He remained secretary-treasurer of the Virginia Education Fund, organized as a fund-raising arm of the Defenders to support private-school education, at least until 1967 and probably until his death. Crawford died in Farmville on November 5, 1973, and was buried in the city’s Westview Cemetery.