Mary-Cooke Branch Munford, who succeeded Valentine as president of the Richmond Education Association in 1904, raised money for the “May Campaign” of 1905, in which pro–school reform public speakers blanketed the state. More than 300 addresses were delivered at 108 meetings in 94 counties, and volunteers distributed more than 200,000 pages of educational literature. Fifty local leagues, most of them headed by women, were established as a result. All fifty were soon at work on the formidable problems of Virginia’s public schools, armed with an ambitious eight-point program and the support of Virginia governor Andrew Jackson Montague.

The Cooperative Education Association’s program included extension of the school term from six to nine months, the creation of rural high schools, agricultural and industrial education, improved teacher training, and the establishment of local school improvement leagues. The May Campaign attracted the attention of the press to educational problems and galvanized a new reform coalition of educators, civic groups, and political reformers—both men and women. (“Now let me make this appeal to the men,” Munford told a cooperative meeting in Lynchburg in 1905. “If you will only steady the ladder, we women will see that the boys and girls of Virginia do not stop until they, too, climb to the top.”) Local school-improvement leagues pressured school officials to modernize facilities and improve conditions for students and teachers. According to Munford, the women involved in the school leagues were like fans at a baseball game: they organized the crowds, cheered the speakers, and served as the backbone of the leagues. 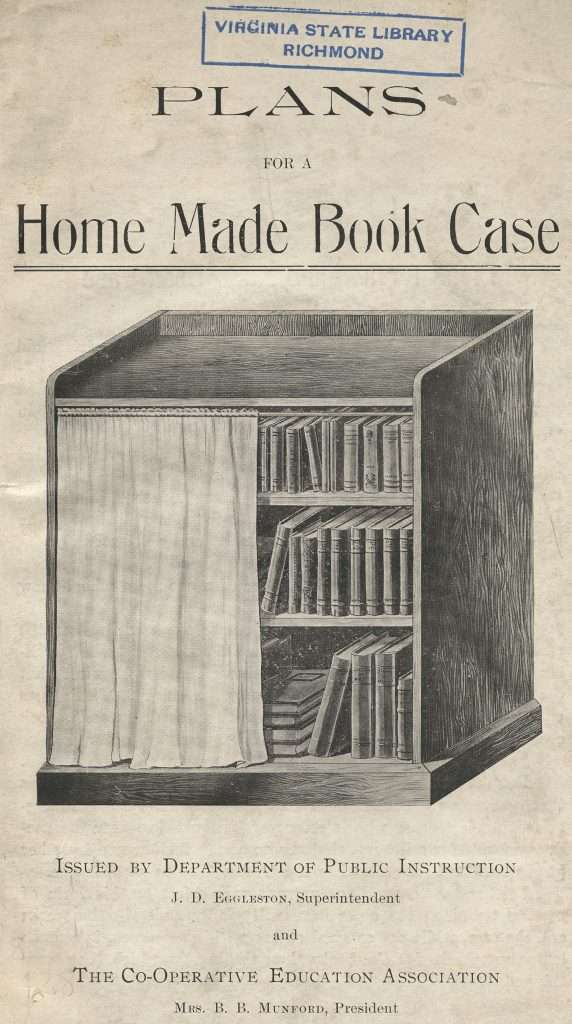 Plans for a Home Made Book Case

Working with the Virginia Department of Public Instruction, the Cooperative Education Association printed a School and Civic League Bulletin, with step-by-step instructions on how to form a league, recruit members, and start the work of reform. The association set out to improve school buildings and playgrounds, supplying blackboards, books, bookcases, and sanitary drinking fountains to guard against contagious diseases like typhoid. “If this is not possible,” the association handbook recommended, “make sure the school is provided with sanitary, covered water coolers and that each child has its own individual drinking cup, for the common drinking bucket or cup is one of the very worst things for the spread of disease.” The association also pressed for the vaccination of students. Outdoor play was also deemed important and healthy, and the associations often landscaped school grounds; planted shade trees; set aside sections for baseball, basketball, lawn tennis, and croquet; and purchased swings, slides, and “other things for the little fellows” to enjoy during recess.

The Virginia General Assembly responded to the growing popular interest in education by enacting several pieces of Progressive legislation. The Mann High School bill, passed in 1906, provided $50,000 in state funds on a matching basis to any county that wanted to establish a high school. As a result, the number of high schools in the state increased from 75 in 1906 to 360 in 1910. The 1908 legislature passed a teacher pension law and created two state normal colleges. From 1905 until 1911, school funds more than doubled and the average school term was increased to seven months. By 1926, Virginians had joined community leagues in record numbers—31,098 citizens belonged to 968 leagues, working together to raise funds to purchase school equipment, employ janitors, serve hot lunches, provide milk, improve playgrounds, and install fire escapes on school buildings. “The league bridges the chasm between the home and the school,” Mary Munford wrote, “and unifies the interests of the community.”