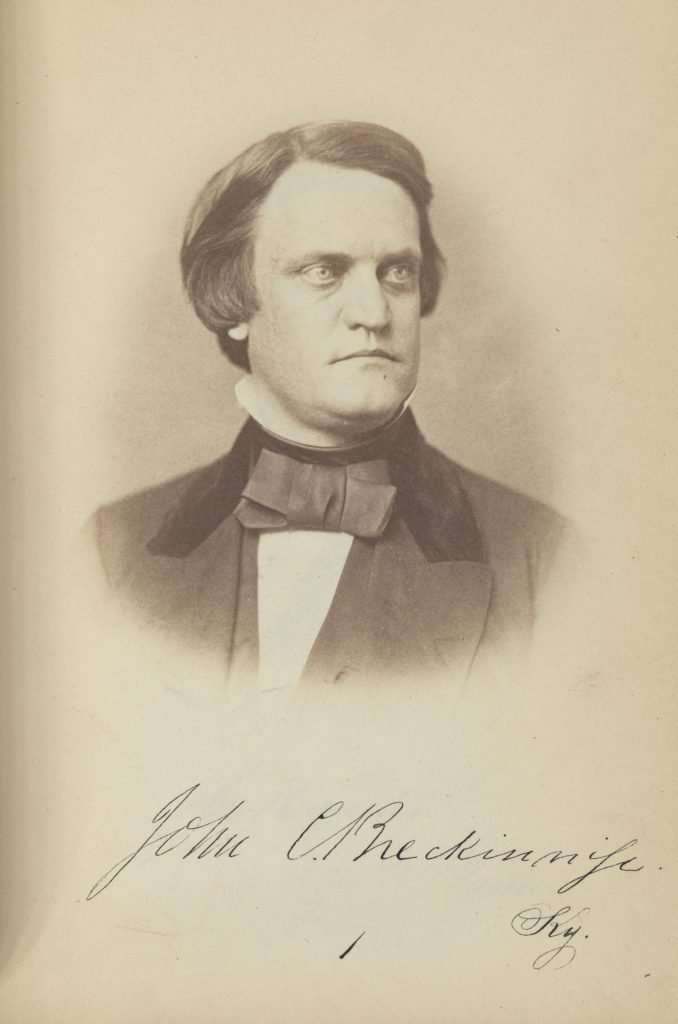 Breckinridge was born on October 5, 1839, at Catawba near Fincastle in Botetourt County, the son of Cary Breckinridge and Emma Walker Gilmer Breckinridge. His grandfather James Breckinridge represented Virginia in Congress, and his cousin John Cabell Breckinridge was vice president of the United States and a major general and secretary of war of the Confederate States.

Breckinridge grew up at his grandfather’s Federal-style mansion, Grove Hill. From it his father managed his plantations and became a wealthy planter, owning nearly 150 slaves in 1860, more than any other person in Botetourt County. After study at home, Breckinridge entered the Virginia Military Institute in Lexington in 1856. He was an unexceptional student and graduated eighteenth in a class of forty-one on July 4, 1860, but during his final year at VMI he served as cadet second lieutenant and ranked first in his class in infantry tactics.

Breckinridge and all four of his brothers fought for the Confederacy, and three of them died. A diary kept by their sister Lucy Gilmer Breckinridge between 1862 and 1864 recorded the constant worry and grief experienced by the family on the home front. Cary Breckinridge enrolled as second lieutenant of the Botetourt Dragoons on May 17, 1861. On January 30, 1862, he was elected captain of Company C, 2nd Regiment Virginia Cavalry, and less than three months later, on April 24, 1862, he received a major’s commission. Breckinridge was an aggressive combatant and during the course of the war reportedly had five horses shot from under him.

At the Second Battle of Manassas, on August 30, 1862, he suffered a saber cut to his face, the first of his five war wounds. Breckinridge was captured at Kelly’s Ford on March 17, 1863, and briefly imprisoned in the Old Capitol Prison in Washington, D.C. After he was exchanged and enjoyed a week of recuperation at home he returned to his regiment. In January 1865 Breckinridge was promoted to lieutenant colonel retroactive to December 7, 1864. During the waning days of the war he was promoted to brigadier general, but having never held that rank in battle he refused to claim it later in life.

Breckinridge returned to Fincastle after the war and on June 27, 1866, married Mary Virginia Calwell, a young woman he had first met and reportedly become infatuated with on a short furlough home in January 1864. She was a native of Greenbrier County, West Virginia, and the granddaughter of James Calwell, the manager of the White Sulphur Springs resort. Four of their five sons and both of their daughters survived to maturity. Breckinridge’s father died in 1867, but he and his wife chose to reside in Fincastle rather than at Grove Hill, where his mother and then his younger brother George William Breckinridge maintained the family estate. Breckinridge and his contemporaries identified him as a farmer, but some accounts state that he also engaged in banking. His standing as a former Confederate officer and his family background undoubtedly helped make him the choice of local Conservatives to run for the House of Delegates in 1869. Indeed, those qualities, combined with his imposing physical stature (contemporaries described him as a “giant”), might have won him greater political prominence had he sought it. Breckinridge carried Botetourt County with nearly twice as many votes as his opponent in 1869. He voted with the Conservative majority in the House of Delegates and served on the Committees of Claims and on Militia and Police. He did not seek reelection.

Breckinridge remained a stalwart of the local Conservative Party and its successor, the Democratic Party, sitting on the county executive committee, attending nominating conventions, and serving between 1887 and 1902 on the county electoral board. He also served on the board of visitors of the Virginia Military Institute from 1888 to 1890. Breckinridge’s most important public service was as superintendent of public schools of Botetourt County from 1886 to 1917. At the close of his three decades in this post, nearly half of the county’s schools remained one-room structures, but the county also boasted a dozen graded schools and seven high schools, two of which were accredited four-year institutions. During Breckinridge’s last year as superintendent, although past the age of seventy-five, he made 114 official visits to different public schools.

Cary Breckinridge died of heart failure on May 11, 1918, at Aspen Hill, his home in Fincastle, and was buried nearby at Godwin Cemetery. His youngest son, William Norwood Breckinridge, a physician, shared his father’s devotion to the Democratic Party, served for many years as mayor of Fincastle, and had the Breckinridge Elementary School there named in his honor.