Skip to content
Author: General AssemblyTranscription Source: William Waller Hening, ed., The Statutes at Large; Being a Collection of All the Laws of Virginia from the First Session of the Legislature, in the Year 1619 (Richmond, Va.: The Franklin Press, 1820), 7:240–241.
FULL TEXT 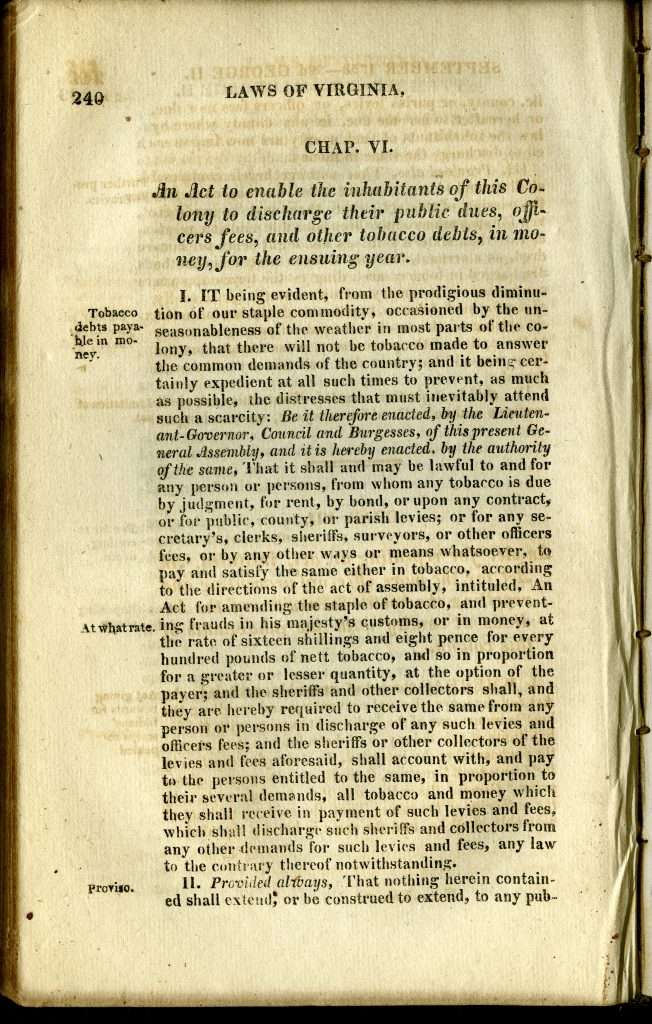 IT being evident, from the prodigious diminution of our staple commodity, occasioned by the unseasonableness of the weather in most parts of the colony, that there will not be tobacco made to answer the common demands of the country; and it being certainly expedient at all such times to prevent, as much as possible, the distresses that must inevitably attend such a scarcity: Be it therefore enacted, by the Lieutenant-Governor, Council and Burgesses, of this present General Assembly, and it is hereby enacted, by the authority of the same, That it shall and may be lawful to and for any person or persons, from whom any tobacco is due by judgment, for rent, by bond, or upon any contract, or for public, county, or parish levies; or for any secretary’s, clerks, sheriffs, surveyors, or other officers fees, or by any other ways or means whatsoever, to pay and satisfy the same either in tobacco, according to the directions of the act of assembly, intitules, An Act for amending the staple of tobacco, and preventing frauds in the majesty’s customs, or in money, at the rate of sixteen shillings and eight pence for every hundred pounds of nett tobacco, and so in proportion for a greater or lesser quantity, at the option of the payer; and the sheriffs and other collectors shall, and they are hereby required to receive the same from any person or persons in discharge of any such levies and officers fees; and the sheriffs or other collectors of the levies and fees aforesaid, shall account with, and pay to the persons entitled to the same, in proportion to their several demands, all tobacco money which they shall receive in payment of such levies ad fees, which shall discharge such sheriffs and collectors from any other demands for such levies and fees, any law to the contrary thereof notwithstanding.

Provided always, That nothing herein contained shall extend, or be construed to extend, to any pub- 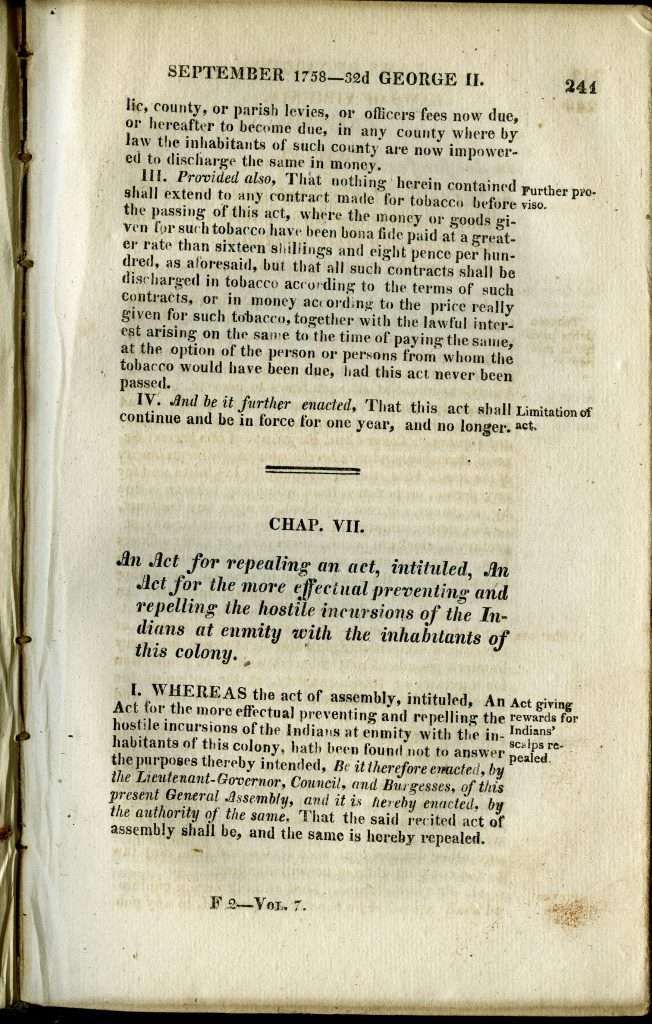 lic, county, or parish levies, or officers fees now due, or hereafter to become due, in any county where by law the inhabitants of such county are now impowered to discharge the same in money.

Provided also, That nothing herein contained shall extend to any contract made for tobacco before the passing of this act, where the money or goods given for such tobacco have been bona fide paid at a greater rate than sixteen shillings and eight pence per hundred, as aforesaid, but that all such contracts shall be discharged in tobacco according to the terms of such contracts, or in money according to the price really given for such tobacco, together with the lawful interest arising on the same to the time of paying the same, at the option of the person or persons from whom the tobacco would have been due, had this act never been passed.

And be it further enacted, That this act shall continue and be in force for one year, and no longer.