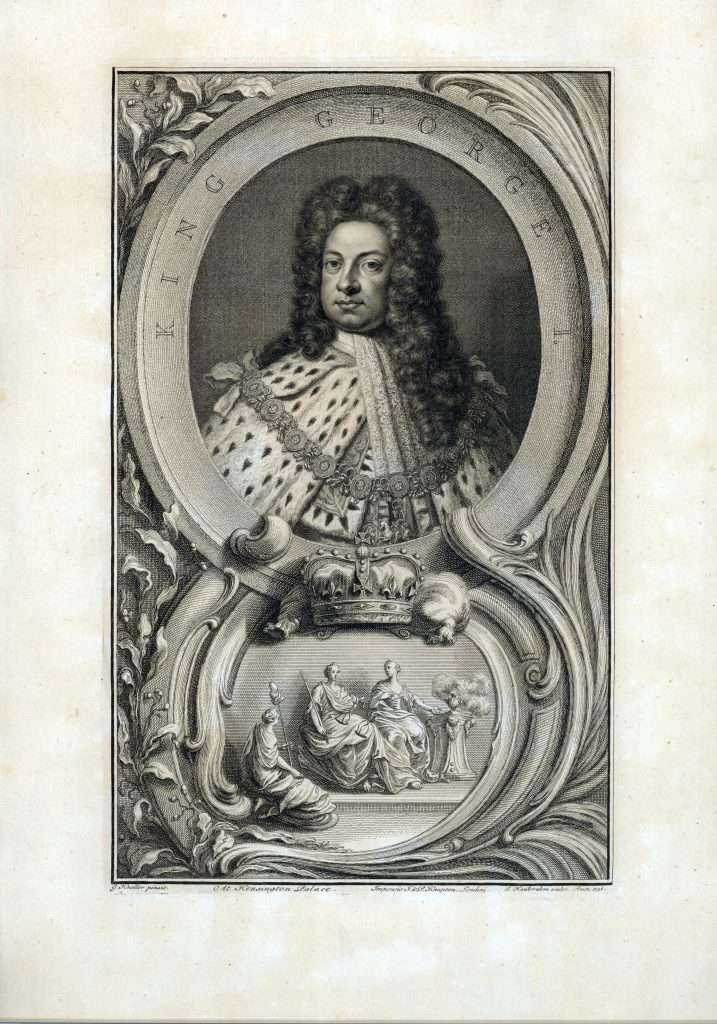 Fauquier was born in London, England, probably not long before he was baptized there in the parish of Saint Andrew Undershaft on July 11, 1703. He was the son of John Francis Fauquier and Elizabeth Chamberlaine Fauquier. His father, a French Huguenot immigrant, was a financial agent and deputy master of the mint, where he served under Sir Isaac Newton and supervised copper coinage early in the reign of George I. At his death in 1726 he was a director of the Bank of England and left his son £5,000 of bank stock and £20,000 worth of stock in the South Sea Company.

Fauquier’s education included studies in Latin, literature, music, and the natural sciences. In 1729 and 1730 he sold his bank stock and probably about that time married Catherine Dalston. They had two sons. Using his inheritance as well as the important connections that came with his marriage and the marriage of his sisters into the Wollaston family, Fauquier led a comfortable and prosperous life. He served as a director of the South Sea Company from 1748 to 1757 with an annual salary of £150. In 1751 he became one of the governors of the Foundling Hospital of London and sat for two terms on its managerial board. In recognition of Fauquier’s interests in science and the arts, he won election to the Royal Society of London in 1753, and five years later he became a corresponding member of the Society for the Encouragement of Arts, Manufactures, and Commerce (popularly known as the Royal Society of Arts).

Fauquier had a keen interest in public finance. He wrote An Essay on Ways and Means for Raising Money for the Support of the Present War, without Increasing the Public Debts (1756), which went through three editions in two years. In it he argued that the ongoing Seven Years’ War with France—what was known in North America as the French and Indian War—would prove so expensive that the government could not pay for it with increased taxes on manufacturers or the laboring classes, as had been proposed. Fauquier suggested that the tax burden be shifted to houses. After receiving considerable criticism of his proposals, he published a second edition that argued for a capitation tax on estates and consumption. His thoughtful arguments and detailed calculations spurred public debate, although none of his proposals was adopted.

Fauquier’s essay and his friendship with the president of the Board of Trade, George Montagu Dunk, second earl of Halifax, led to his appointment on January 26, 1758, as lieutenant governor of Virginia, to succeed the retiring Robert Dinwiddie. Fauquier’s wife and elder son accompanied him to Virginia and resided with him in the palace in Williamsburg until 1766. Fauquier took office on June 5, 1758, and until his death almost ten years later worked diligently to solve Virginia’s many problems while maintaining a delicate balance between the needs of the British empire and the desires of the political elite in Virginia. The Board of Trade reprimanded him several times for not following his instructions from London, as when he declined to force a separation of the offices of treasurer of the colony and Speaker of the House of Burgesses. Following the death of John Robinson, who had held both offices, and the disclosure that his accounts were in arrears to the colony more than £100,000, Fauquier appointed Robert Carter Nicholas treasurer, and the House of Burgesses elected Peyton Randolph as Speaker.

The General Assembly supported the war against France reluctantly and, from the point of view of London, inadequately. The House of Burgesses had balked at Dinwiddie’s aggressive and unsuccessful military actions and voted for cheaper defensive measures. Fauquier was able to do little to increase enthusiasm for enlistments, which frequently fell short of expectations. Moreover, deteriorating relationships with the Cherokee on the southern frontier led to open conflict in 1759, but Fauquier’s persistent efforts helped produce an uneasy peace in 1761. To finance the campaigns, the assembly turned primarily to emissions of paper money, which Fauquier reluctantly approved and the Board of Trade and English merchants thoroughly disapproved. 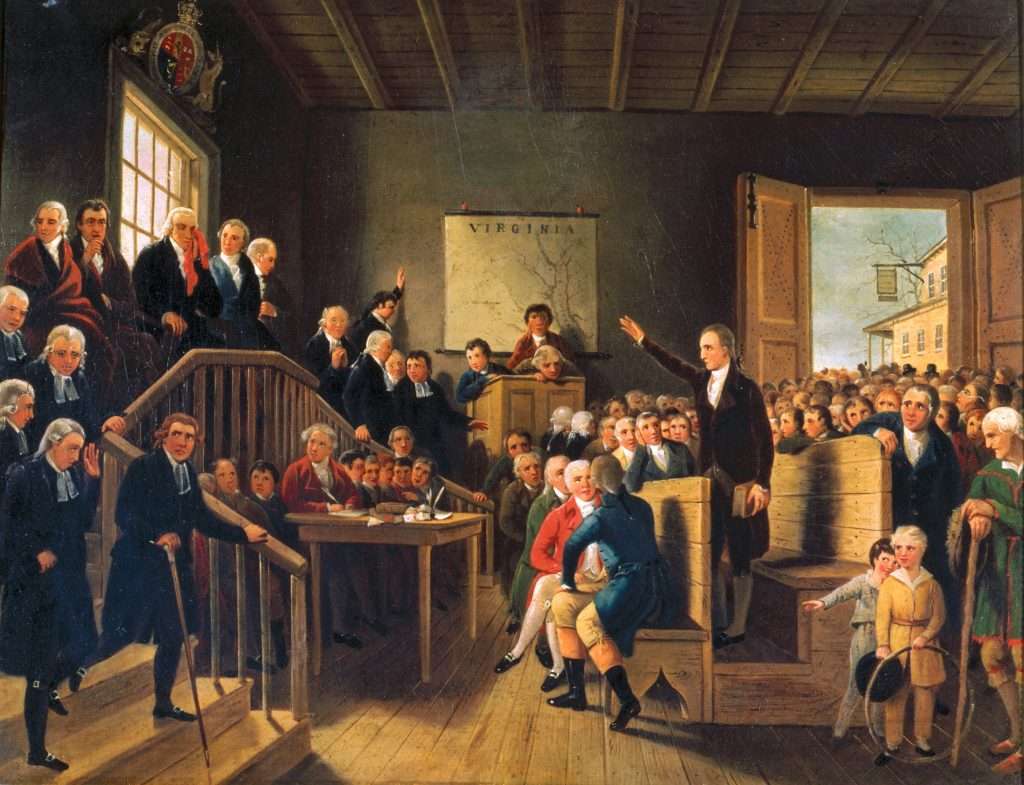 During Fauquier’s first year in Virginia a poor tobacco harvest prompted the assembly to pass the second of the so-called Two Penny Acts, similar to one adopted in 1755, which allowed payment of taxes and public salaries owed in tobacco with money at a rate approximating two pence per pound of tobacco. The law, which Fauquier signed and for which he received another rebuke for disobeying London’s instructions, effectively reduced the value of the salaries of parish rectors, who by law received 16,000 pounds of tobacco per year. John Camm, a minister and former professor at the College of William and Mary, took the lead in appealing to the Privy Council to have the law disallowed on the grounds that it in effect amended the salary law that the king had previously approved without including a clause suspending its operation until the king could review it. Fauquier later accused Camm of tampering with the official copy of the king’s disallowance of the Two Penny Act and angrily banned Camm from the governor’s palace. When another clergyman sued for the difference between the money he received and the amount he would have gotten in higher-priced tobacco, Patrick Henry gained his first renown arguing against the clergyman and charging that the king had acted unjustly and tyrannically in disallowing the law.

Fauquier managed to keep the British government at arm’s length while maintaining a strong, positive relationship with most of the colony’s political elite. He nevertheless failed to support the large-scale land speculators after the royal Proclamation of 1763 ordered that settlers not move west of the Appalachian Mountains, where conflicts with Indians threatened the peace. Small farmers had already settled there, and others continued to move into the area in spite of the proclamation. Fauquier issued proclamations of his own against their settlements, which restricted the activities of the large speculators more than of the settlers, but he took no other effective action. 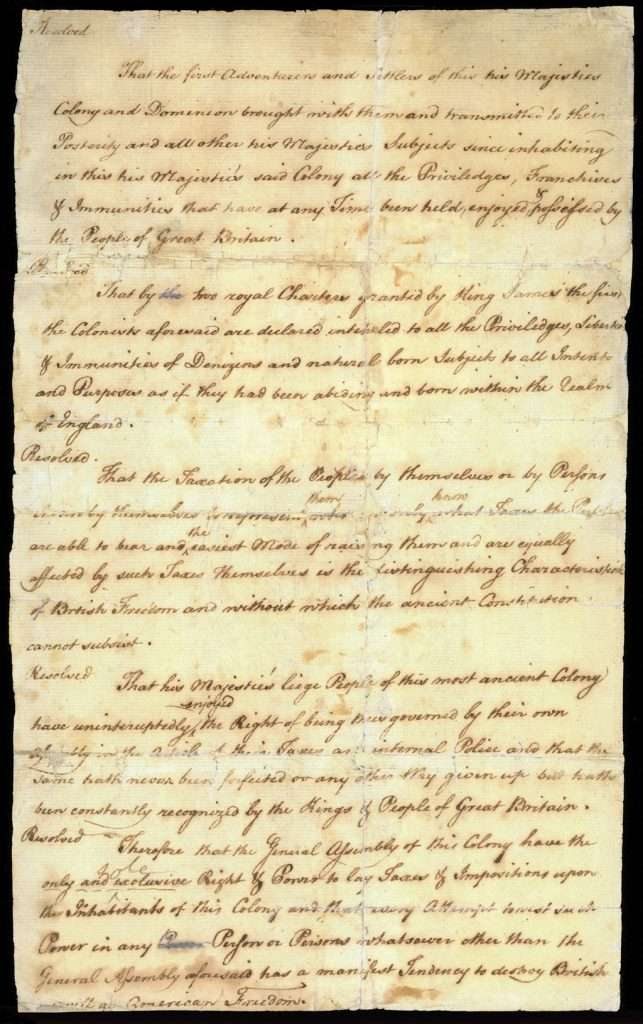 The Stamp Act of 1765 created the most serious crisis that Fauquier faced. At the May 1765 session of the General Assembly, Patrick Henry persuaded a sparsely attended House of Burgesses to adopt five resolutions condemning the Stamp Act as a violation of the ancient rights of Englishmen in Virginia. Burgesses alarmed at the wording of one of Henry’s approved resolutions rescinded it. Two other resolutions were never formally proposed or voted on. Fauquier kept the resolutions from being printed in the Virginia Gazette , although all seven were printed in newspapers in other colonies. The assembly was not in session when the Stamp Act Congress was summoned to meet in New York to coordinate colonial opposition, and Virginia was therefore not represented. In October 1765 when George Mercer arrived from England with stamps to enforce the new law, Fauquier helped prevent a riot in the streets of Williamsburg, where opponents of the act threatened Mercer with violence and forced him to resign.

Fauquier was one of the most popular colonial lieutenant governors. His good working relationship with the colony’s political leaders and his interest in education generally and in the Enlightenment in particular earned respect and praise. During 1767 Fauquier suffered several bouts of illness and was unable to work for weeks at a time. He wrote a new will in which he lamented that his lifestyle in Virginia required him to own slaves, and he stipulated that his twelve adult slaves be allowed to choose their new masters and that female slaves not be separated from their children. He also requested that an autopsy be performed on his body should his physicians not know what disease had killed him so that “I may become more useful to my fellow Creatures by my Death than I have been in my life.” Early in the following year Fauquier became ill again and died in the palace in Williamsburg on March 3, 1768. He was buried in Bruton Parish Church, in Williamsburg, five days later.

RELATED CONTENT
Categories:
Type:
Related SOLs:
MAP
TIMELINE
July 11, 1703
Francis Fauquier is baptized in London, England, in the parish of Saint Andrew Undershaft. He is the son of John Francis Fauquier, a French Huguenot, and Elizabeth Chamberlaine Fauquier.
1726
John Francis Fauquier, a French Huguenot immigrant and a financial agent and deputy master of the mint who served under Sir Isaac Newton and supervised copper coinage early in the reign of George I, dies. At the time he was director of the Bank of England. He leaves money and stock to his son, Francis Fauquier.
1729—1730
Francis Fauquier sells the bank stock left to him by his father and, probably at this time, marries Catherine Dalston. The couple will have two sons.
1748—1757
Francis Fauquier serves as director of the South Sea Company with an annual salary of ¬£150.
1751
Francis Fauquier becomes one of the governors of the Foundling Hospital of London and sits for two terms on its managerial board.
1753
Francis Fauquier wins election to the Royal Society of London.
1756
Francis Fauquier publishes An Essay on Ways and Means for Raising Money for the Support of the Present War, without Increasing the Public Debts, which goes through three editions in two years.
1758
Already a member of the Royal Society of London, Francis Fauquier becomes a corresponding member of the Society for the Encouragement of Arts, Manufactures, and Commerce (popularly known as the Royal Society of Arts).
January 26, 1758
Capitalizing on his friendship with the president of the Board of Trade, George Montagu Dunk, second earl of Halifax, Francis Fauquier is appointed lieutenant governor of Virginia, to succeed the retiring Robert Dinwiddie.
June 5, 1758
With the arrival of the new lieutenant governor, Francis Fauquier, John Blair, president of the governor's Council, ends his service as acting governor of Virginia.
October 12, 1758
Lieutenant Governor Francis Fauquier signs the Two Penny Act, which fixes the rate of Anglican ministers' salaries at two pence per pound of tobacco. This effectively reduces their pay and earns Fauquier a rebuke from authorities in London.
May 29, 1765
Patrick Henry persuades a sparsely attended House of Burgesses to adopt five resolutions condemning the Stamp Act as a violation of the ancient rights of Englishmen in Virginia, known as the "Virginia Resolves on the Stamp Act." Burgesses rescind one resolution and never formally propose or vote on two others.
October 1765
George Mercer arrives in Virginia from England with stamps to enforce the controversial Stamp Act. Lieutenant Governor Francis Fauquier helps prevent a riot in the streets of Williamsburg, where opponents of the act threaten Mercer with violence and force him to resign.
May 11, 1766
After the death of the colony's treasurer and Speaker of the House of Burgesses, John Robinson, and learning that his accounts are in arrears to the colony more than ¬£100,000, Lieutenant Governor Francis Fauquier appoints Robert Carter Nicholas treasurer. Peyton Randolph wins election as the Speaker.
1767
Lieutenant Governor Francis Fauquier suffers several bouts of illness and is unable to work for weeks at a time. He writes a will lamenting that he owns slaves, stipulating that their families not be separated upon his death, and requesting an autopsy should his cause of death not be clear.
March 3, 1768
Francis Fauquier dies in the palace in Williamsburg.
March 8, 1768
Francis Fauquier is buried in Bruton Parish Church, in Williamsburg.
CITE THIS ENTRY