Maximilian Rudolph Schele De Vere was born on November 1, 1820, probably in Växjö, Sweden. He may have been the son of Johanna Wilhelmina Eggers von Scheele and Christian Benjamin von Scheele, an officer in the Swedish army whose family was from Pomerania, a Prussian province on the Baltic Sea. According to the Handbuch des Preussischen Adels (1893), his baptismal name was Rudolf Ludolf Friedrich Karl Maximilian von Scheele. He spent part of his childhood in Silesia, a Prussian province that later became part of Poland, where he learned the Slavic language. He studied at the University of Bonn and at the University of Berlin, from which he received a doctorate in 1841. The University of Greifswald granted him a Doctor of Civil and Canon Law the following year. 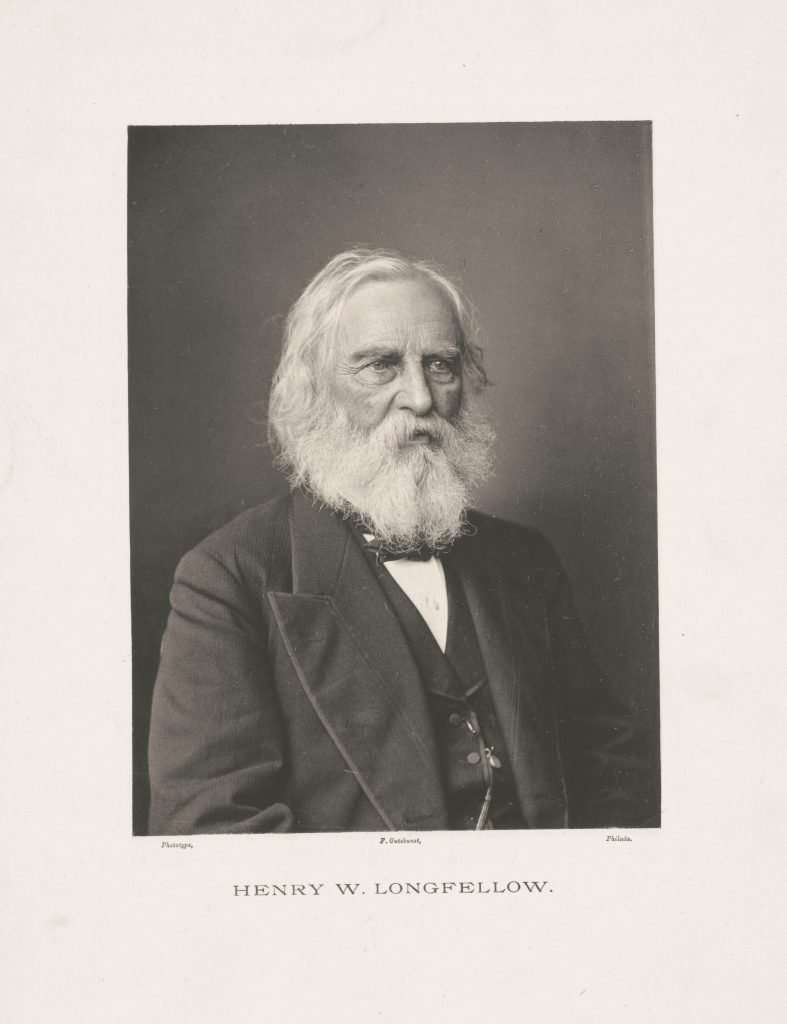 Von Scheele saw military service in Prussia and possibly in Algiers and worked as a clerk in the civil service of the Prussian government before serving as an attaché, possibly at the embassy at Saint Petersburg, Russia. He may have married an Irish woman named Maud De Vere. About the time he moved to the United States in 1842, he adopted the surname Schele De Vere. From 1842 to 1844 Schele De Vere worked in Philadelphia as an editor of Die Alte und Neue Welt, a German-language weekly, and in 1843 took part in founding the Deutsche Einwanderungsgesellschaft zu Philadelphia. In 1844 he moved to Boston, where he studied modern Greek at Harvard and joined the distinguished literary circle around Henry Wadsworth Longfellow and George Ticknor.

In September 1844, with recommendations from Longfellow, other notable Bostonians, and the Prussian consul general in Baltimore, Schele De Vere accepted an invitation to become professor of modern languages at the University of Virginia. He initially taught Anglo-Saxon as the root of modern English, and French, German, Spanish, and Italian, along with the literature and political history of each nation. On July 25, 1849, he married Eliza Wydown Rives, the daughter of Alexander Rives, who served on the Virginia Supreme Court of Appeals and as a federal judge after the Civil War. She was also the niece of William Cabell Rives, who was twice minister to France and served in both the U.S. Congress and Confederate Congress. She died on July 20, 1851, following the birth of a daughter who lived twelve years. 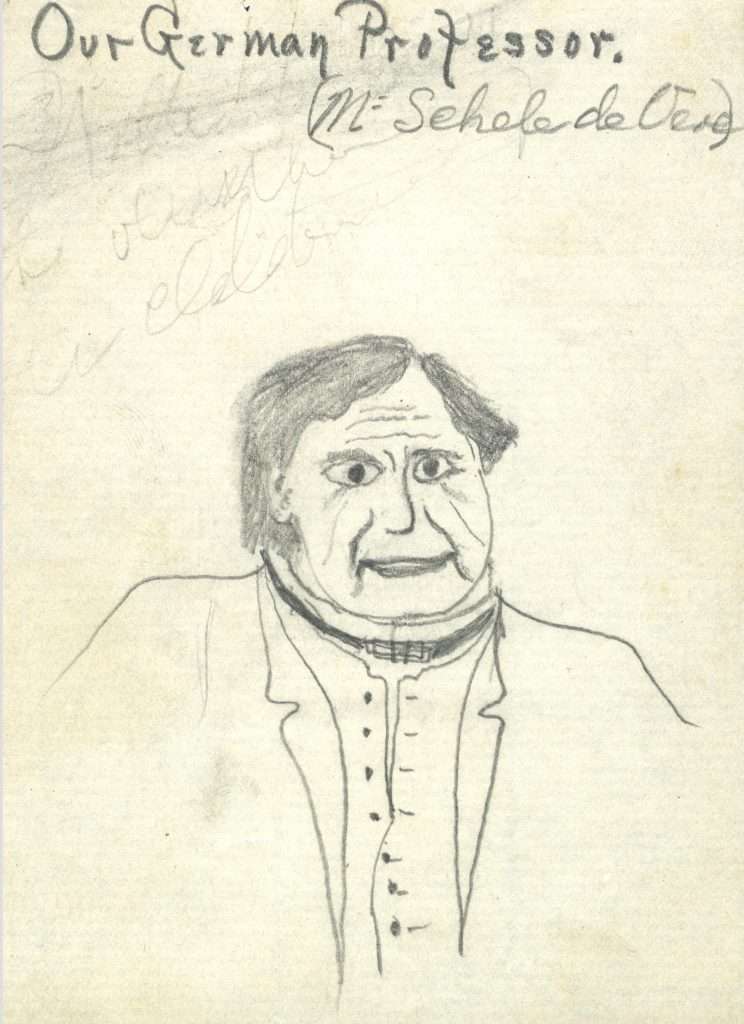 During the 1856–1857 academic year, 241 out of 645 students at the University of Virginia attended Schele De Vere’s classes in modern languages. He was a popular teacher who was once described as being a Swede by birth, a Prussian by allegiance, and a cultivated Frenchman in appearance. Each year from 1851 to 1861 Schele De Vere had as many as three assistants, two of whom were Germans. In 1853 he published Outlines of Comparative Philology and the following year published Grammar of the Spanish Language, with a History of the Language, and Practical Exercises. His book of essays on natural history subjects entitled Stray Leaves from the Book of Nature appeared in 1855. Schele De Vere married his wife’s younger sister, Lucy Brown Rives, on March 21, 1860. They had no children. Soon after arriving in Virginia he had acquired two slaves and in 1860 paid taxes on four enslaved laborers older than age sixteen.

In March 1861, before Virginia seceded from the United States, he described himself as a supporter of the Union, but during the Civil War he served as captain of a home guard company. The university faculty granted Schele De Vere leave of absence to travel to Europe in April 1863 to assist the Confederacy. One faculty member, George Frederick Holmes, wrote a confidential letter to the secretary of state that contained vague criticisms of Schele De Vere, which may have dissuaded the government from taking advantage of his knowledge of European languages, even though Schele De Vere offered his services to the Confederacy. During the war he assisted at least one native German to travel from Virginia to Northern states.

Schele De Vere may have resided in Italy for a brief time after the war but soon returned to Virginia and resumed his professorship. He was one of the eighty-four students of language who in July 1869 founded the American Philological Association. He translated into English and in 1869 published Friedrich Spielhagen’s novels Problematic Characters and Through Night to Light and in 1870 The Hohensteins. Schele De Vere also edited an illustrated edition of Xavier Boniface Saintine‘s Myths of the Rhine and two volumes of the Illustrated Library of Wonders. He continued to publish textbooks on language, including Studies in English; Or, Glimpses of the Inner Life of Our Language and First French Reader: For Beginners, both in 1867, Introduction to the Study of French in 1870, Americanisms: The English of the New World in 1872, and The French Verb: A New, Clear and Easy Method for the Study of the French Verb in 1891.

Schele De Vere also wrote many articles on a variety of subjects for national journals during the 1870s and 1880s. He published another volume of natural history essays entitled Wonders of the Deep in 1869, and in 1870 he published a book entitled The Great Empress: A Portrait on the Roman Agrippina. The Romance of American History: Early Annals appeared in 1872 and a volume on the occult, Modern Magic the following year.

For many years Schele De Vere was the only instructor in the school of modern languages, and he continued to teach Anglo-Saxon, Spanish, and Italian after he gained an assistant late in the 1880s and relinquished the classes in French and German. In 1894, on the fiftieth anniversary of his appointment, colleagues and former students presented Schele De Vere a large silver punch bowl lined with gold and a matching ladle in a handsome oak case trimmed with brass and inscribed with a dedication and accompanied by a letter of congratulation in recognition of his distinguished service.

Amid a university investigation into two libelous letters he reportedly sent to another professor and the chair of the faculty, Schele De Vere resigned on March 29, 1895, after fifty years of teaching. Reports that he had become addicted to morphine that he took to control back pain may have reduced his effectiveness and popularity during his final years on the faculty. Schele De Vere moved to Washington, D.C., where he died on May 12, 1898. He was buried in the city’s Rock Creek Cemetery, where his widow, who died the following July 9, was also buried.