Robinson was born free on October 28, 1825, or 1826, in Cumberland County. His father was likely a member of the Isbell family, white farmers in the county. His mother was Catharine “Kitty” Lipscomb, a free woman of mixed race who inherited land and two enslaved persons. White officials recorded his name in public documents as John Lipscomb until the 1850s or 1860s when he, his mother, and siblings adopted the surname Robinson, likely after Nathaniel Robinson, who was apparently the father of his brother Jeter. Some public records of the time include references to the name change. In none of the legal documents filed after 1866 does the name Lipscomb appear, although his son signed his name as James Henry Lipscomb Robinson when applying for a Confederate pension for work done at a saltworks during the Civil War. As with many other mid-nineteenth-century Virginians, especially people who changed their names, references to him in surviving documents contain inconsistencies and inaccuracies (his surname appears variously as Robinson, Robertson, and Roberson) and possibly confusion about which person of that name is mentioned.

The extended Lipscomb family included a dozen or more households of free African Americans in Cumberland and Powhatan Counties, several of whom owned land. He was first cousin, once removed, to James F. Lipscomb, who represented Cumberland in the House of Delegates from 1869 to 1877. Registers of free Blacks disclose that more than one John Lipscomb lived in Cumberland County in the 1850s and 1860s. An 1855 list includes a man of that name and of approximately the right age who was then “Trading in Oysters &c.” Contemporaries described him as of very light complexion and intelligent, although he may never have learned to read and write. 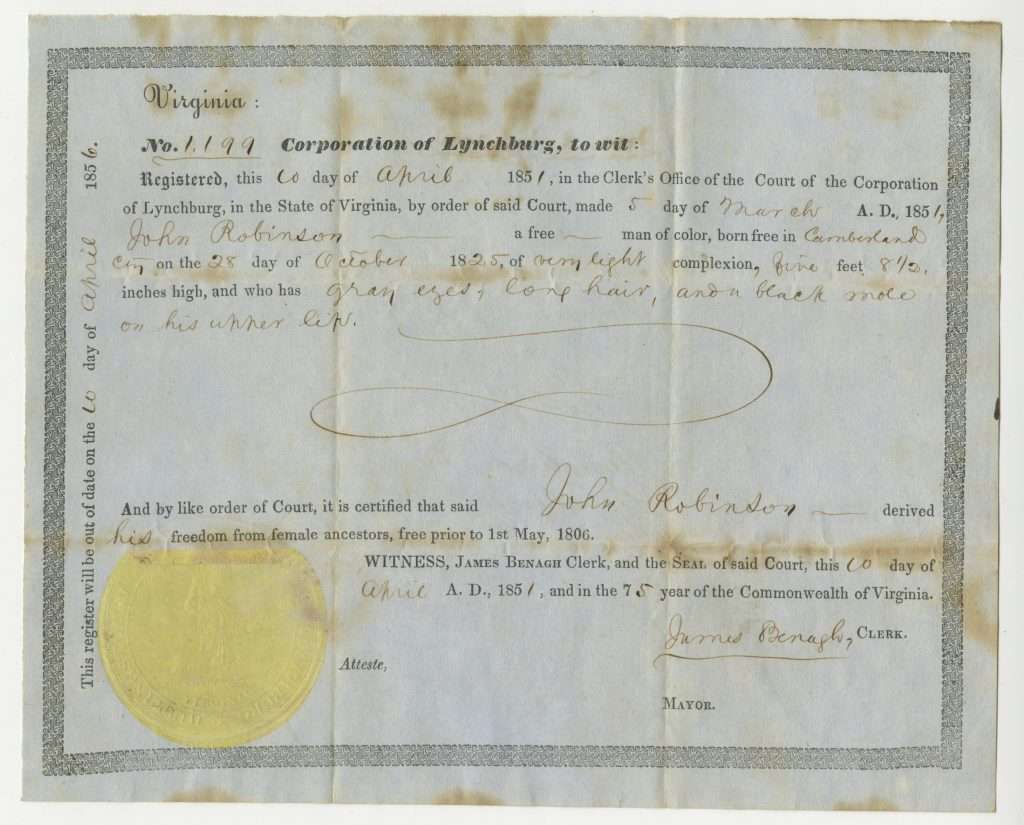 On April 10, 1851, Robinson registered as a free man in Lynchburg, but it is unclear whether he remained long in the city. He registered again in Cumberland County on January 26, 1857, two years after he purchased a small tract of land there and not long before he purchased another, the two together containing twenty-three acres. The county tax rolls for 1861 indicate that a free Black man named John Robinson owned two parcels of land in the same part of the county that together contained twenty-four acres and were worth $705 and that he also owned one enslaved person between the ages of twelve and twenty-one. The census of 1860 listed him as Lipscomb and identified him as a wagon driver who owned real estate worth $700 and personal property worth $2,100.

He may have been the free person identified as John Lipscomb who in July 1862 was forced into service briefly at a Confederate military hospital in Farmville. In September 1863 county officials requisitioned an enslaved man from John Robinson to work on military fortifications. He did not comply, but the following month when the county repeated the requisition he sent his son James Henry Robinson as a laborer. In the summer of 1864, Robinson was twice mobbed and beaten and then fled to Amelia County. After the war, he sued two groups of white men (several men were in both groups) for assault and battery and eventually obtained judgments against most of them. On a change of venue, one of the cases was tried in Prince Edward County and was not concluded until September 1871.

In September 1864, shortly after fleeing Cumberland County, Robinson sold 143 acres of land there for $4,000 and agreed to receive $3,000 of that in Confederate currency, but he later charged that the sale was a forced fraud and refused to acknowledge the receipt of Confederate paper money as legal payment. The resulting lawsuit was the first of about ten in which he was engaged in the courts of Amelia, Cumberland, and Powhatan Counties to try to protect his financial interests and property.

Robinson entered politics in 1867 after Congress placed the states of the former Confederacy under military supervision and required each to hold a convention and write a new state constitution. Congress also required that African American men be permitted to vote in the election of delegates and to be eligible to serve in the convention. When African Americans voted in Virginia for the first time, Robinson won election on October 22, 1867, to represent Cumberland County in the convention that met from December 3 of that year to April 17, 1868. He received 1,203 votes that Black men in the county cast and none from white men, and his white opponent received 383 votes from white men and 40 from Black men. General John M. Schofield, the commander of the First Military District, wrote that Robinson was intelligent and energetic and had the confidence of other African Americans. A later observer noted that Robinson did not often speak during the convention but let his votes express his opinion.

Robinson served on the Committee on County and Corporation Courts and County Organizations. He voted with the radical reformers in the convention on every major issue. In January, Robinson introduced four resolutions: one to send a committee to Washington to urge Congress to assist the impoverished freedpeople; another to request that Congress exclude from office all men who participated in the Confederacy; a third to limit the poll tax to twenty-five cents so as not to disfranchise poor freedpeople; and a fourth to require that loyal men who had been forced to sell their property during the war for Confederate currency—as he said that he had been—be able to recover their property and pay balances on war-time land transactions in U.S. currency only. The new state constitution granted the vote to adult African American men, provided for a new statewide system of free public schools, introduced democratic reforms in local government, and established a $2,000 homestead exemption that prohibited seizure and sale of property for payment of debts. On July 6, 1869, Virginia voters ratified the constitution but rejected two clauses designed to disfranchise most former Confederates.

At the same time, Robinson won election to the Senate of Virginia with almost 40 percent of the vote in a three-way race to represent the district of Amelia, Cumberland, and Nottoway Counties. Some districts were redrawn in 1871, and for the remainder of his four-year term he represented the counties of Amelia, Cumberland, and Prince Edward. Robinson served on the Committee on Public Institutions that drafted the laws creating the new statewide free public school system. On October 8, 1869, he voted to ratify the Fourteenth and Fifteenth Amendments to the Constitution, which Congress required Virginia to do before admitting the state’s congressmembers and restoring it to full statehood. In March 1871, Robinson voted against the Funding Act of 1871 that ultimately passed, leading to a prolonged political crisis about the antebellum state debt. While serving in the assembly, he attended the Republican Party‘s state conventions in 1871 and 1872. Robinson ran for reelection in 1873 but after a contentious campaign lost to a white Republican, Edgar Allan.

In June 1877 Robinson bought the Effingham House tavern near the Cumberland County Courthouse for $2,500 and later returned to Cumberland County to live. He suffered financial difficulties but continued to operate the tavern and hotel until his death. Many details of his personal life remain undocumented or unclear according to available records. The 1860 and 1870 U.S. Census returns document his wife Emily M. Johns Robinson, with whom he had at least thirteen children. She died by 1874, after which time he married Martha Johns, who was likely related to his first wife. They had at least two sons and two daughters before she died in childbirth on December 10, 1883.

Robinson died at Effingham House in Cumberland County during the night of January 15–16, 1908, and was buried in Jetersville, in Amelia County. In a brief obituary in the Richmond Planet on January 25, 1908, a friend wrote about Robinson that “he was known far and wide as a man wholly devoid of fear, far-seeing, keen and resourceful. He was not book-learned, but his store of common sense and legal lore seemed unbounded.”

RELATED CONTENT
Categories:
Type:
MAP
TIMELINE
October 28, 1825 or 1826
John Robinson is born free in Cumberland County and is related to House of Delegates member James F. Lipscomb.
1850s or 1860s
John Robinson and members of his family adopt the surname Robinson, likely after Nathaniel Robinson, who was apparently the father of his brother Jeter.
April 10, 1851
John Robinson registers as a free man in Lynchburg.
January 26, 1857
John Robinson registers as a free man in Cumberland County, where he purchases property.
1861
Cumberland County tax rolls indicate John Robinson owns land and a slave.
July 1862
John Robinson may be the man referred to in records indicating a John Lipscomb was forced into Confederate service at a military hospital.
After 1864
John Robinson is party to about ten lawsuits attempting to protect his property interests.
Summer 1864
John Robinson is attacked twice and flees to Amelia County.
September 1864
John Robinson sells 143 acres of land in Cumberland County, and at first agrees to and then denies accepting Confederate currency for the sale.
1865—September 1871
John Robinson successfully sues two groups of white men for assault and battery that occurred during 1864.
March 2, 1867
The U.S. Congress passes the Reconstruction Act, ushering in the period of Radical Reconstruction in the South. This act, among other provisions, required former Confederate states to grant voting rights to black men—a measure later made inalienable by the ratification of the Fifteenth Amendment to the U.S. Constitution in 1870.
October 22, 1867
In the first election in which African American men could vote, John Robinson is elected to represent Cumberland County at the constitutional convention.
December 3, 1867—April 17, 1868
Delegates, including many African Americans, meet in Richmond for the constitutional convention, chaired by John C. Underwood. African American men were able to vote for delegates to the convention, and many white men refused to vote in protest.
January 1868
At the constitutional convention, John Robinson introduces four resolutions protecting freedpeople and barring former Confederates from government service.
July 9, 1868
The Fourteenth Amendment to the U.S. Constitution is ratified. It grants citizenship to all African Americans and bars former Confederate officials from holding state or federal political office. A two-thirds vote by both houses will override that limitation in the cases of Robert E. Lee (1975) and Jefferson Davis (1978).
July 6, 1869
Voters ratify a new state constitution, often called the Underwood Constitution, rejecting separate provisions that would have disfranchised men who had held civil or military office under the Confederacy. The new constitution supplants the former one, proclaimed on April 7, 1864.
October 1869
John Robinson takes his seat in the Senate of Virginia and serves on the committee creating public schools.
October 8, 1869
John Robinson votes to ratify the Fourteenth and Fifteenth amendments to the U.S. Constitution.
February 3, 1870
The Fifteenth Amendment to the U.S. Constitution, granting African American men the right to vote, is ratified.
1871 and 1872
John Robinson attends the Republican state convention.
March 1871
John Robinson votes against the Funding Act.
March 30, 1871
The General Assembly passes "An Act to Provide for the Funding and Payment of the Public Debt," or the Funding Act of 1871.
March 1872
The General Assembly repeals the portion of the Funding Act that permits people to pay taxes with coupons.
1873
John Robinson loses reelection to the Senate of Virginia to white Republican Edgar Allan.
June 1877
John Robinson buys Effingham House tavern in Cumberland County for $2500 and operates it through financial difficulties.
January 15—January 16, 1908
John Robinson dies at Effingham House in Cumberland County and is buried in Jetersville.
FURTHER READING
CITE THIS ENTRY