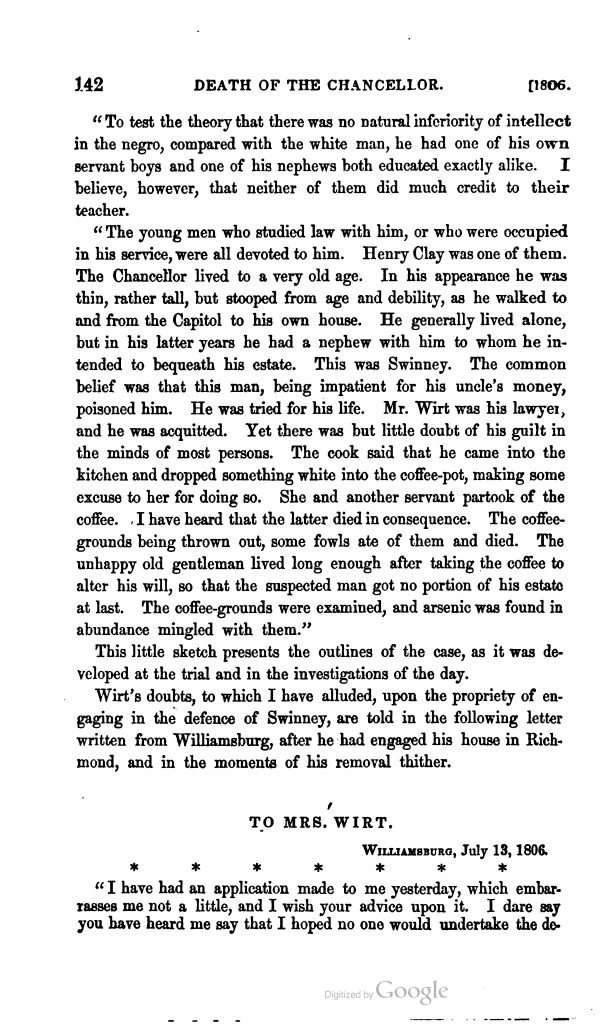 “I have had an application made to me yesterday, which embarrasses me not a little, and I wish your advice upon it. I dare say you have heard me say that I hoped no one would undertake the defence 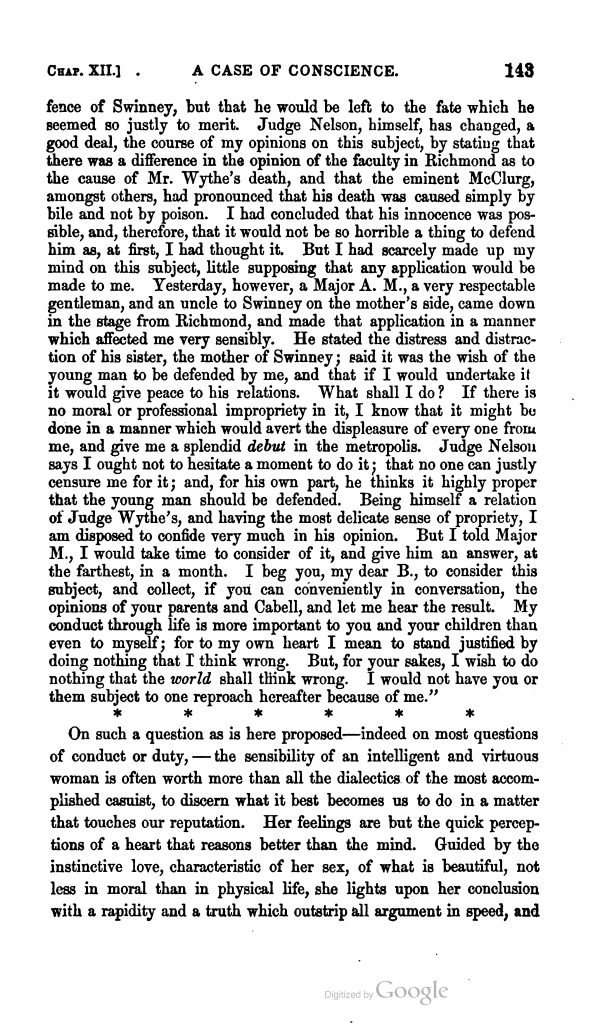 of Swinney, but that he would be left to the fate which he seemed so justly to merit. Judge Nelson, himself, has changed, a good deal, the course of my opinions on this subject, by stating that there was a difference in the opinion of the faculty in Richmond as to the cause of Mr. Wythe’s death, and that the eminent McClurg, amongst others, had pronounced that his death was caused simply by bile and not by poison. I had concluded that his innocence was possible, and, therefore, that it would not be so horrible a thing to defend him as, at first, I had thought it. But I had scarcely made up my mind on this subject, little supposing that any application would be made to me. Yesterday, however, a Major A. M., a very respectable gentleman, and an uncle to Swinney on the mother’s side, came down in the stage from Richmond, and made that application in a manner which affected me very sensibly. He stated the distress and distraction of his sister, the mother of Swinney; said it was the wish of the young man to be defended by me, and that if I would undertake il it would give peace to his relations. What shall I do? If there is no moral or professional impropriety in it, I know that it might be done in a manner which would avert the displeasure of every one from me, and give me a splendid debut in the metropolis. Judge Nelson says I ought not to hesitate a moment to do it j that no one can justly censure me for it; and, for his own part, he thinks it highly proper that the young man should be defended. Being himself a relation of Judge Wythe’s, and having the most delicate sense of propriety, I am disposed to confide very much in his opinion. But I told Major M., I would take time to consider of it, and give him an answer, at the farthest, in a month. I beg you, my dear B., to consider this subject, and collect, if you can conveniently in conversation, the opinions of your parents and Cabell, and let me hear the result. My conduct through life is more important to you and your children than even to myself; for to my own heart I mean to stand justified by doing nothing that I think wrong. But, for your sakes, I wish to do nothing that the world shall think wrong. I would not have you or them subject to one reproach hereafter because of me.”