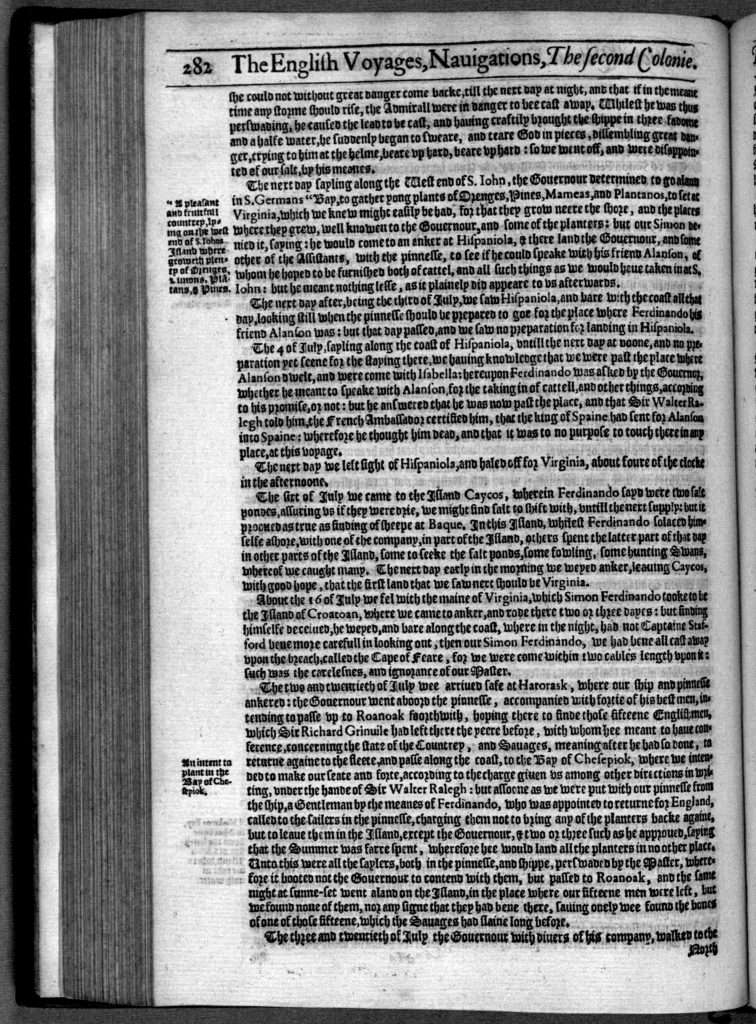 John White’s Change of Plans; an excerpt from “The voyage of Edward Stafford and John White” by John White (1589), Page 282

The two and twentieth of July wee arrived safe at Hatorask, where our shippe and pinnesse ankered: the Governour went aboord the pinnesse, accompanied with fortie of his best men, intending to passe up to Roanoake foorthwith, hoping there to find those fifteene Englishmen, which Sir Richard Grinvile had left there the yeere before, with whom hee meant to have conference, concerning the state of the Countrey, and Savages, meaning after he had so done, to returne againe to the fleete, and passe along the coast, to the Baye of Chesepiok, where we intended to make our seate and forte, according to the charge given us among other directions in writing, under the hande of Sir Walter Ralegh: but assoone as we were put with our pinnesse from the ship, a Gentleman by the meanes of Ferdinando, who was appointed to returne for England, called to the sailers in the pinnesse, charging them not to bring any of the planters back againe, but leave them in the Island, except the Governour, & two or three such as he approoved, saying that the Summer was farre spent, wherefore hee would land all the planters in no other place. Unto this were all the saylers, both in the pinnesse, and shippe, perswaded by the Master, wherefore it booted not the Governour to contend with them, but passed to Roanoake, and the same night at sunne-set, went aland on the Island, in the place where our fifteene men were left, but we found none of them, nor any signe, that they had bene there, saving onely we found the bones of one of those fifteene, which the Savages had slaine long before.