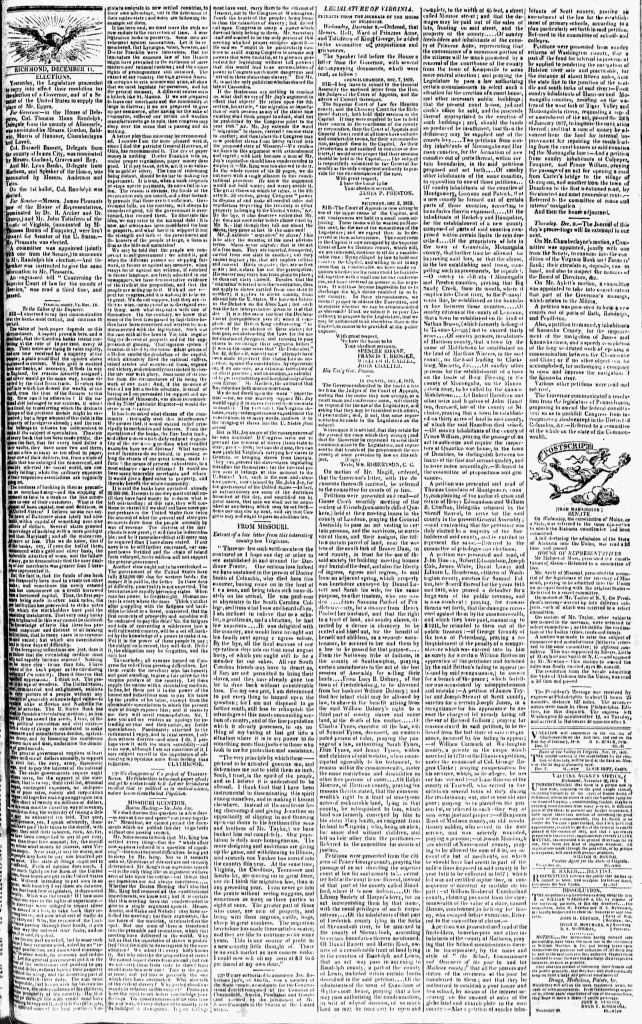 Extract of a late letter from this interesting country to a Virginian.

“There are few such settlements on the continent as I hope one day or other to see established in and around the Dardenne Prairie. One serious loss indeed we have sustained in the person of Doctor Smith of Columbia, who died here this summer, having come on in the heat of the season, and being taken sick immediately on his arrival. He was professor of chymistry in the South Carolina College, and from what I saw and heard of him, I am inclined to believe that as a scholar, a gentleman, and a christian, he had few superiors. … He was delighted with the country, and would have brought out his family next spring congress volente. By the bye, all the final success of our operations depends on that most august body, of which you ought still to be a member for our sakes. All our South Carolina friends may have to desert us, if they are not permitted to bring their slaves, and they have already gone too far to draw back without considerable loss. For my own part, I am determined to put everything to hazard upon the question; for I am not disposed to go farther south, still less to relinquish the advantages of this most commanding section of country, and of the fine population which it already possesses, to say nothing of my having at last got into a situation where it is in my power to do something more than justice to those who look to me for protection and assistance.

“The very principle by which these—pretend to be actuated governs me, and determines me not to yield them an inch. Such, I trust, is the spirit of the people, and so I believe it is understood to be abroad. I thank God that I have been instrumental in disseminating this spirit among ourselves, and in making it known elsewhere. Instead of the southrons being discouraged and giving Jonathan an opportunity of slipping in and throwing open our doors to his brethren (the sons and brothers of Mr. Taylor,) we have backed him out completely. Our population is daily more homogeneous. The more designing and ambitious are giving up the game, and withdrawing to Illinois, and scarcely one Yankee has moved into the country this year. At the same time, Virginia, the Carolinas, Tennessee and Kentucky, are moving on in great force, nor do I think the migration less, than in any preceding year. I can never go into the prairie without seeing waggons [sic], and sometimes as many as three parties in sight at once. The greater part of those who come, are men of property, and bring with them negroes, cattle, hogs, sheep in great numbers. The migration heretofore has made these articles scarce, and they are like to continue so for some years. This is one source of profit in a new country little thought of. There is no such market as new comers make. I could now sell all my corn at $3 to 6 per barrel at my own door.”

“From Missouri, Extract of a late letter from this interesting country to a Virginian,” Richmond Enquirer” (December 11, 1819) Charlotte Resolves (February 4, 1833) “A Note to Blackstone’s Commentaries” by Beverley Tucker (January 1835) “An Essay on the Moral and Political Effect of the Relation between the Caucasian Master and the African Slave” by Beverley Tucker (1844)