Skip to content
Author: General AssemblyTranscription Source: William Waller Heining, The Statutes at Large; Being a Collection of All the Laws of Virginia from the First Session of the Legislature in the Year 1619 (New York: R. & W. & G. Bartow, 1823), 2:138–143.
FULL TEXT
— page 138 — 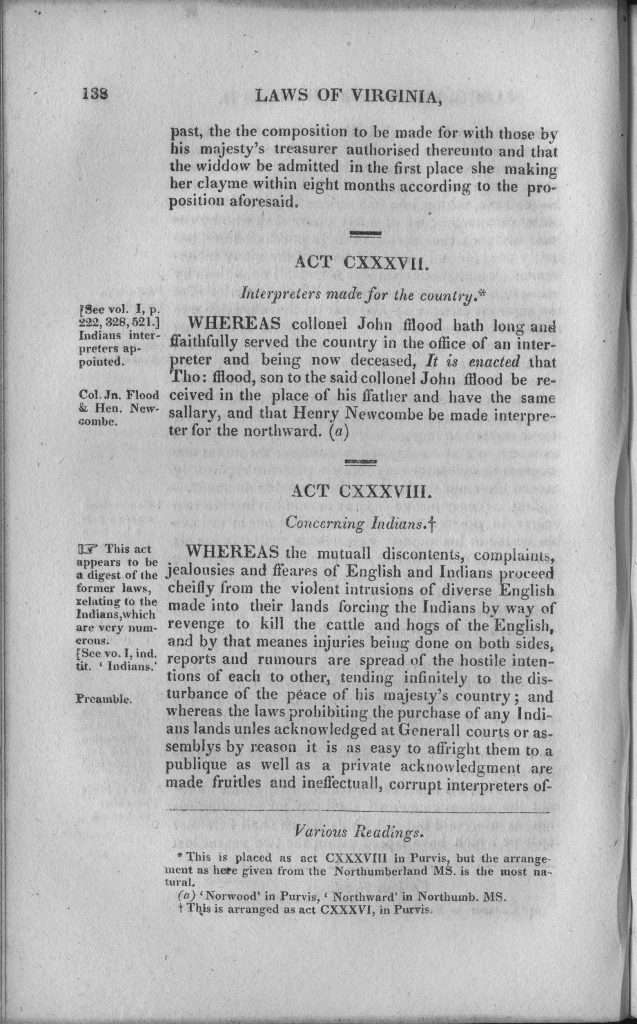 WHEREAS the mutuall discontents, complaints, jealousies and ffeares of English and Indians proceed cheifly from the violent intrusions of diverse English made into their lands forcing the Indians by way of revenge to kill the cattle and hogs of the English, and by that meanes injuries being done on both sides, reports and rumours are spread of the hostile intentions of each to other, tending infinitely to the disturbance of the peace of his majesty’s country; and whereas the laws prohibiting the purchase of any Indians lands unles acknowledged at Generall courts or assemblys by reason it is as easy to affright them to a publique as well as a private acknowledgment are made fruitles and ineffectuall, corrupt interpreters of- 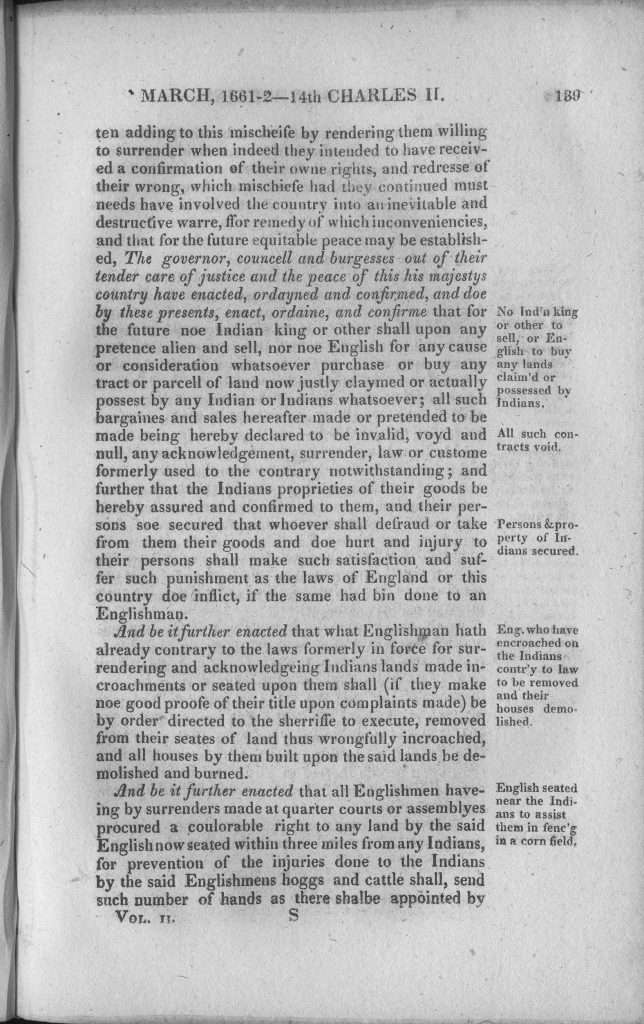 ten adding to this mischeife by rendering them willing to surrender when indeed they intended to have received a confirmation of their owne rights, and redresse of their wrong, which mischiefe had they continued must needs have involved the country into an inevitable and destructive warre, ffor remedy of which inconveniencies, and that for the future equitable peace may be established, The governor, councell and burgesses out of their tender care of justice and the peace of this his majestys country have enacted, ordayned and confirmed, and doe by these presents, enact, ordaine, and confirme that for the future noe Indian king or other shall upon any pretence alien and sell, nor no English for any cause or consideration whatsoever purchase or buy any tract or parcell of land now justly claymed or actually possest by any Indian or Indians whatsoever; all such bargaines and sales hereafter made or pretended to be made being hereby declared to be invalid, voyd and null, any acknowledgement, surrender, law or custome formerly used to the contrary notwithstanding; and further that the Indians proprieties of their goods be hereby assured and confirmed to them, and their persons soe secured that whoever shall defraud or take from them their goods and doe hurt and injury to their persons shall make such satisfaction and suffer such punishment as the laws of England or this country doe inflict, if the same had bin done to an Englishman.

And be it further enacted that what Englishman hath already contrary to the laws formerly in force for surrendering and acknowledgeing Indians lands made incroachments or seated upon them shall (if they make noe good proofe of their title upon complaints made) be by order directed to the sherriffe to execute, removed from their seates of land thus wrongfully incroached, and all houses by them built upon the said lands be demolished and burned.

And be it further enacted that all Englishmen haveing by surrenders made at quarter courts or assemblyes procured a coulorable right to any land by the said English now seated within three miles from any Indians, for prevention of the injuries done to the Indians by the said Englishmens hoggs and cattle shall, send such number of hands as there shalbe appointed by 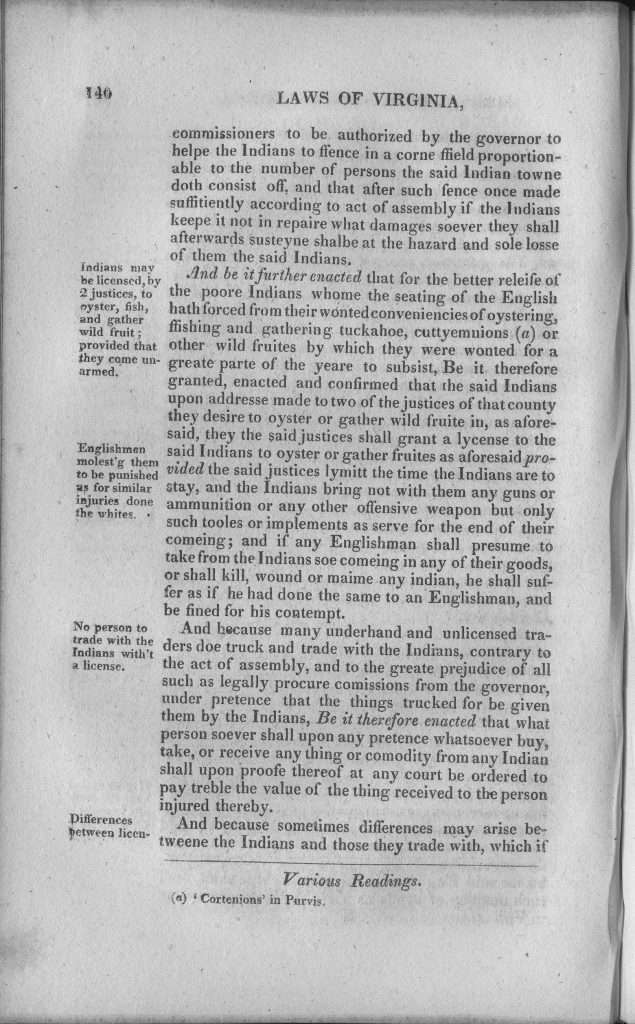 commissioners to be authorized by the governor to helpe the Indians to ffence in a corne ffield proportionable to the number of persons the said Indian towne doth consist off, and that after such fence once made suffitiently according to act of assembly if the Indians keepe it not in repaire what damages soever they shall afterwards susteyne shalbe at the hazard and sole losse of them the said Indians.

And be it further enacted that for the better releife of the poore Indians whome the seating of the English hath forced from their wonted conveniencies of oystering, ffishing and gathering tuckahoe, cuttyemnions or other wild fruites by which they were wonted for a greate parte of the yeare to subsist, Be it therefore granted, enacted and confirmed that the said Indians upon addresse made to two of the justices of that county they desire to oyster or gather wild fruite in, as aforesaid, they the said justices shall grant a lycense to the said Indians to oyster or gather fruites as aforesaid provided the said justices lymitt the time the Indians are to stay, and the Indians bring not with them any guns or ammunition or any other offensive weapon but only such tooles or implements as serve for the end of their comeing; and if any Englishman shall presume to take from the Indians soe comeing in any of their goods, or shall kill, wound or maime any indian, he shall suffer as if he had done the same to an Englishman, and be fined for his contempt.

And because many underhand and unlicensed traders doe truck and trade with the Indians, contrary to the act of assembly, and to the greate prejudice of all such as legally procure comissions from the governor, under pretence that the things trucked for be given them by the Indians, Be it therefore enacted that what person soever shall upon any pretence whatsoever buy, take, or receive anything or comodity from any Indian shall upon proofe thereof at any court be ordered to pay treble the value of the thing received to the person injured thereby.

And because sometimes differences may arise betweene the Indians and those they trade with, which if 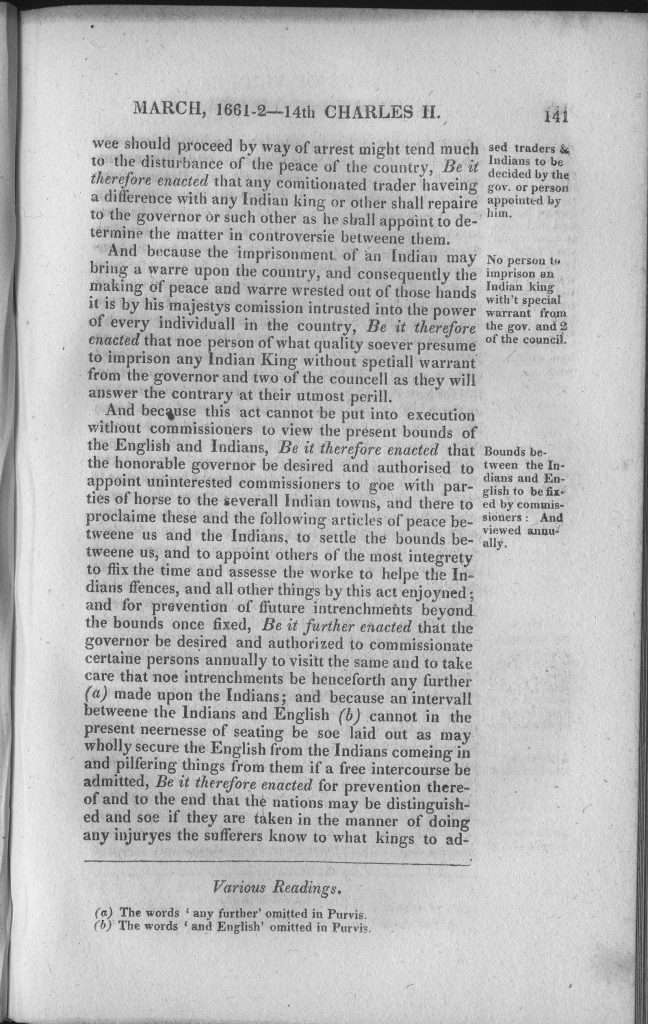 wee should proceed by the way of arrest might tend much to the disturbance of the peace of the country, Be it therefore enacted that any that any comitionated trader haveing a difference with any Indian king or other shall repaire to the governor or such other as he shall appoint to determine the matter in controversie betweene them.

And because the imprisonment of an Indian may bring a warre upon the country, and consequently the making of peace and warre wrested out of those hands it is by his majestys comission intrusted into the power of every individuall in the country, Be it therefore enacted that noe person of what quality soever presume to imprison any Indian King without spetiall warrant from the governor and two of the councell as they will answer the contrary at their utmost perill.

And because this act cannot be put into execution without commissioners to view the present bounds of the English and Indians, Be it therefore enacted that the honorable governor be desired and authorised to appoint uninterested commissioners to goe with parties of horse to the severall Indian towns, and there to proclaime these and the following articles of peace betweene us and the Indians, to settle the bounds betweene us, and to appoint others of the most integrety to ffix the time and assesse the worke to helpe the Indians ffences, and all other things by this act enjoyned; and for prevention of ffuture intrenchments beyond the bounds once fixed, Be it further enacted that the governor be desired and authorized to commissionate certaine persons annually to visitt the same and to take care that noe intrenchments be henceforth any further made upon the Indians; and because an intervall betweene the Indians and English cannot in the present neernesse of seating be soe laid out as may wholly secure the English from the Indians comeing in and pilfering things from them if a free intercourse be admitted, Be it therefore enacted for prevention thereof and to the end that the nations may be distinguished and soe if they are taken in the manner of doing any injuryes the sufferers know to what kings to ad- 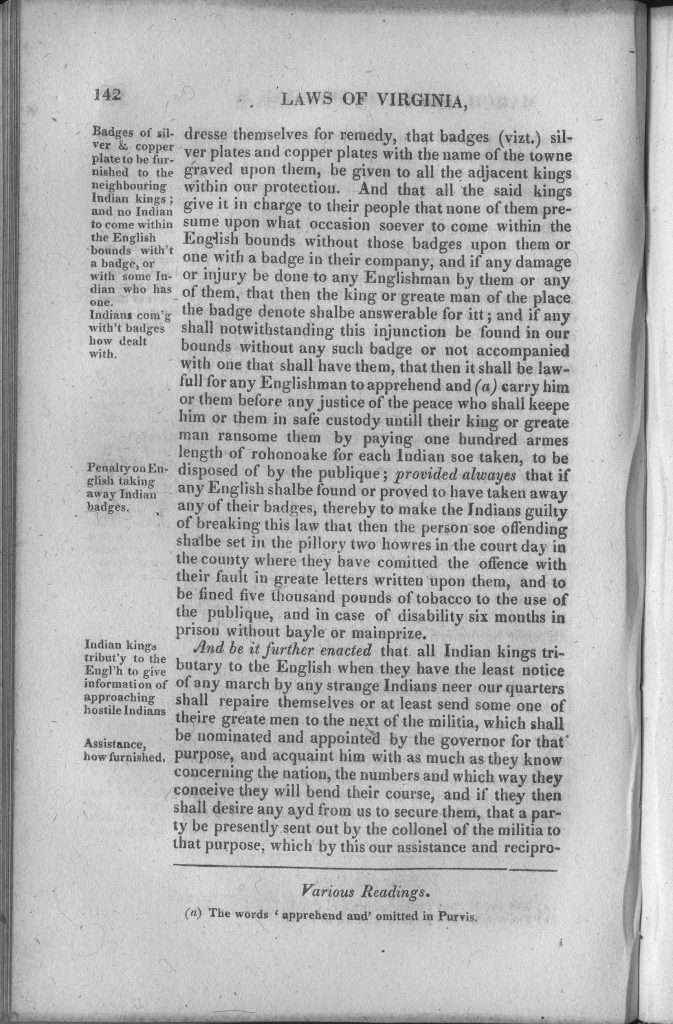 dresse themselves for remedy, that badges (vizt.) silver plates and copper plates with the name of the towne graved upon them, be given to all the adjacent kings within our protection. And that all the said kings give it in charge to their people that none of them presume upon what occasion soever to come within the English bounds without those badges upon them or one with a badge in their company, and if any damage or injury be done to any Englishman by them or any of them, that then the king or greate man of the place the badge denote shalbe answerable for itt; and if any shall notwithstanding this injunction be found in our bounds without any such badge or not accompanied with one that shall have them, that then it shall be lawfull for any Englishman to apprehend and carry him or them before any justice of the peace who shall keepe him or them in safe custody untill their king or greate man ransome them by paying one hundred armes length of rohonoake for each Indian soe taken, to be disposed of by the publique; provided alwayes that if any English shalbe found or proved to have taken away any of their badges, thereby to make the Indians guilty of breaking this law that then the person soe offending shalbe set in the pillory two howres in the court day in the county where they have comitted the offence with their fault in greate letters written upon them, and to be fined five thousand pounds of tobacco to the use of the publique, and in case of disability six months in prison without bayle or mainprize.

And be it further enacted that all Indian kings tributary to the English when they have the least notice of any march by any strange Indians neer our quarters shall repaire themselves or at least send some one of theire greate men to the next of the militia, which shall be nominated and appointed by the governor for that purpose, and acquaint him with as much as they know concerning the nation, the numbers and which way they conceive they will bend their course, and if they then shall desire any ayd from us to secure them, that a party be presently sent out by the collonel of the militia to that purpose, which by this our assistance and recipro- 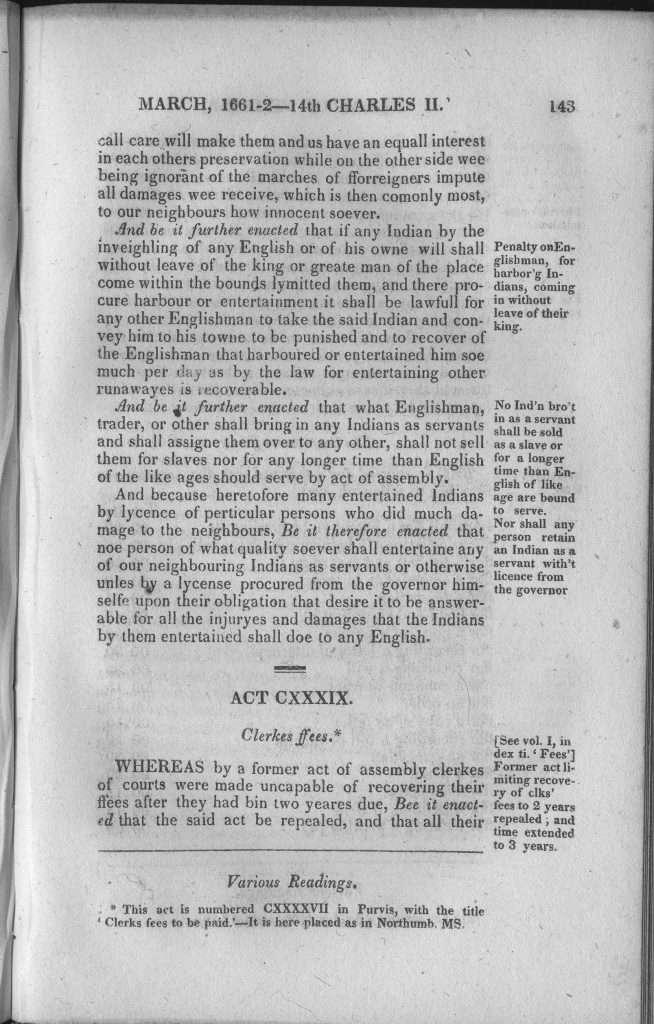 call care will make them and us have an equall interest in each others preservation while on the other side wee being ignorant of the marches of fforreigners impute all damages wee receive, which is then comonly most, to our neighbours how innocent soever.

And be it further enacted that if any Indian by the inveighling of any English or of his owne will shall without leave of the king or greate man of the place come within the bounds lymitted them, and there procure harbour or entertainment it shall be lawfull for any other Englishman to take the said Indian and convey him to his towne to be punished and to recover of the Englishman that harboured or entertained him soe much per day as by the law for entertaining other runawayes is recoverable.

And be it further enacted that what Englishman, trader, or other shall bring in any Indians as servants and shall assigne them over to any other, shall not sell them for slaves nor for any longer time than English of the like ages should serve by act of assembly.

And because heretofore many entertained Indians by lycence of perticular persons who did much damage to the neighbours, Be it therefore enacted that noe person of what quality soever shall entertaine any of our neighbouring Indians as servants or otherwise unles by a lycense procured from the governor himselfe upon their obligation that desire it to be answerable for all the injuryes and damages that the Indians by them entertained shall doe to any English.