Herbert Green Cochran was born on April 15, 1885, in Farmington, Kent County, Delaware, and was the son of Frederick J. Cochran and Dora Bell Hoffecker Cochran. He grew up in Delaware and on the Eastern Shore of Maryland, where his father, a Methodist minister, held pastorates. He attended the Wilmington Conference Academy (later Wesley College), in Dover, Delaware, before enrolling in Dickinson College, in Carlisle, Pennsylvania, where he was elected to Phi Beta Kappa and in 1908 received a BA. Cochran read law from 1908 to 1911 as a Rhodes Scholar at the University of Oxford before attending the law school at the University of Virginia for one year. He was admitted to the bar in 1912 and began practicing law in Norfolk. Cochran served as a public defender from 1916 to 1917 before leaving for service in France during World War I (1914–1918). Following his return to Norfolk after the war, he became a special assistant city attorney and in April 1919 began rewriting Norfolk’s city code, which the city council adopted the following year.

Cochran joined a prominent law firm in 1921 and the following year established a partnership with Norfolk’s mayor, Albert L. Roper. In 1925 Cochran became substitute judge for the Norfolk Juvenile and Domestic Relations Court, after William Wadsworth Dey took a leave of absence beginning on March 31, 1925. Dey submitted his resignation in December of that year, effective on January 5, 1926, and Cochran was appointed to fill the vacancy. 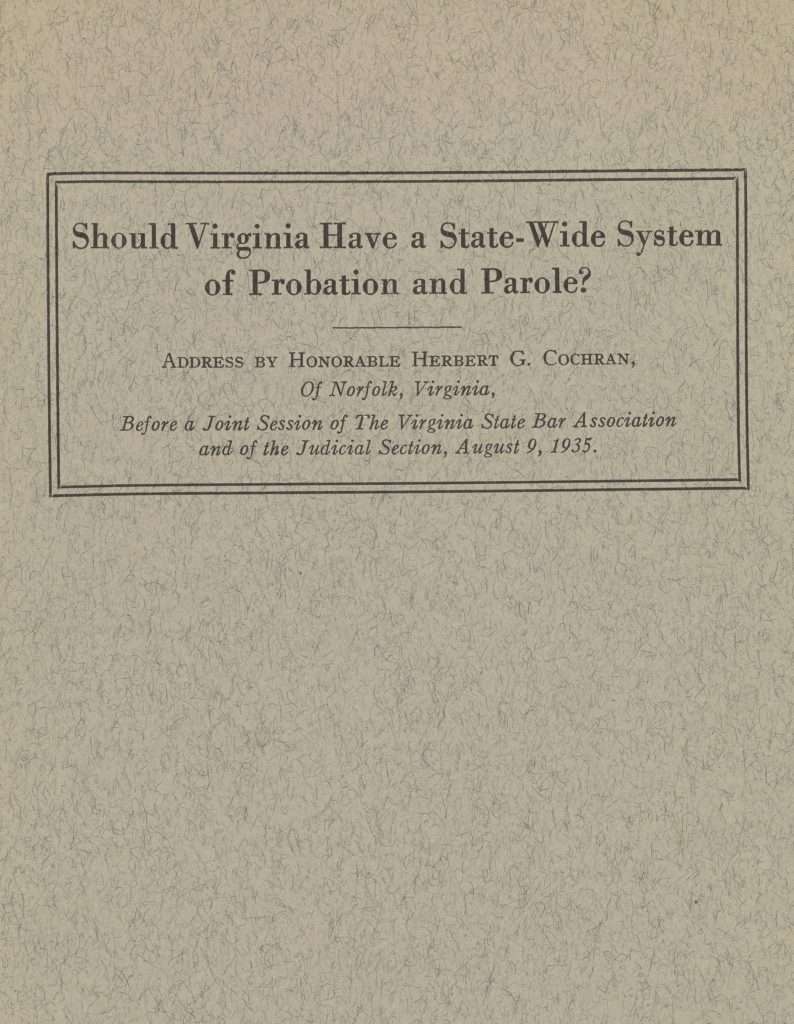 Should Virginia Have a State-Wide System of Probation and Parole?

Described as intelligent and tireless, Cochran also was controversial during three decades on the bench. He believed that the welfare of defendant juveniles was paramount and that the court’s mission was to salvage lives rather than simply imposing punishments. In adjudicating cases Cochran emphasized individual treatment of defendants and examined their personal characteristics and social relationships instead of focusing strictly on their offenses. Believing that confinement in prisons did little to rehabilitate inmates and make them productive members of society, he argued that incarceration contributed to recidivism. He was one of the first Virginia judges who used probation and family counseling programs to resolve cases.

Cochran and his counterparts in Richmond and Roanoke, James Hoge Ricks and Odessa Pittard Bailey, respectively, were allies in firmly establishing the juvenile court movement in Virginia. Ricks and Cochran were equally prominent on the national level. Cochran served on the board of directors of the National Probation Association from 1928 through 1943, and he joined Ricks on the association’s committee that in 1943 revised the Standard Juvenile Court Act, which became a model statute for many states’ juvenile codes, including the one Virginia adopted in 1950.

Active in many state and national legal organizations, Cochran was a fellow of the American Law Institute, sat on the advisory council of the Association of Juvenile Court Judges of America, helped establish the Virginia Council of Juvenile Court Judges and served on its executive committee, and influenced legislative policy as a member of the Juvenile Court and Delinquency Committee of the Virginia Advisory Legislative Council. In 1936, as a member of a special legislative commission that studied Virginia jails, he urged that prisons be used for temporary detention only, and not as places in which criminals served long sentences, because prisoners were not being rehabilitated. Cochran also served the local community and the state in social causes as president of the Norfolk Council of Social Agencies and the Virginia Conference of Social Work. He sat on the boards of the Norfolk Community Fund and the Virginia League for Planned Parenthood and was a member of the Virginia Interracial Commission.

Cochran enjoyed a national and international reputation. He assisted Massachusetts in modernizing its juvenile laws. He was a fellow of the American Academy of Political and Social Science, a member of the International Council on Social Welfare, and a participant in the 1930 White House Conference on Child Health and Protection. He often spoke at conferences on juvenile justice issues and social work. On April 30, 1954, poor health forced Cochran to begin a six-month leave of absence from the bench, after which he retired. He continued to live in Norfolk with his wife Jeannette Payne Todd Cochran, a widow whom he had married on April 5, 1941, in Louisville, Kentucky. Cochran died in a Norfolk hospital on November 17, 1969, and was buried in Lakeside Cemetery, in Dover, Delaware.