Clark was born into slavery in Halifax County and was the son of Mathew Clark and Chaney Clark. Contemporary public records occasionally expand his name to Mathew or Matthew Clark, and sometimes add a terminal e to his surname, but he signed his name as Matt Clark, and his name appeared in that form in the official proceedings of the House of Delegates. The name of his owner and the circumstances under which he secured his freedom are not known. By 1870 Clark had married Elizabeth Betts, could both read and write, was a farm laborer, and lived in the Mount Carmel district of Halifax County, near the North Carolina border. On October 6, 1870, he paid $154.12 for thirty-four acres of land located at or near the township of Black Walnut, where on May 22, 1873, he was elected justice of the peace.

In November 1873 Clark received just six fewer votes than the leading candidate in a six-man race that pitted three Republicans against three Conservatives in a contest for Halifax County’s three seats in the House of Delegates. One of two black Halifax Republicans elected to serve in the sessions that met from January 1 to April 30, 1874, and from December 2, 1874, to March 31, 1875, he sat on the Committee on Asylums and Prisons. Clark seldom spoke on the House floor, even on routine procedural matters, and introduced only a few bills and resolutions, including a resolution supporting the improvement of living conditions at the Central Lunatic Asylum in Petersburg and a bill authorizing Halifax County residents to vote on establishing a free bridge at South Boston either by purchasing the existing toll bridge there or erecting a new bridge. 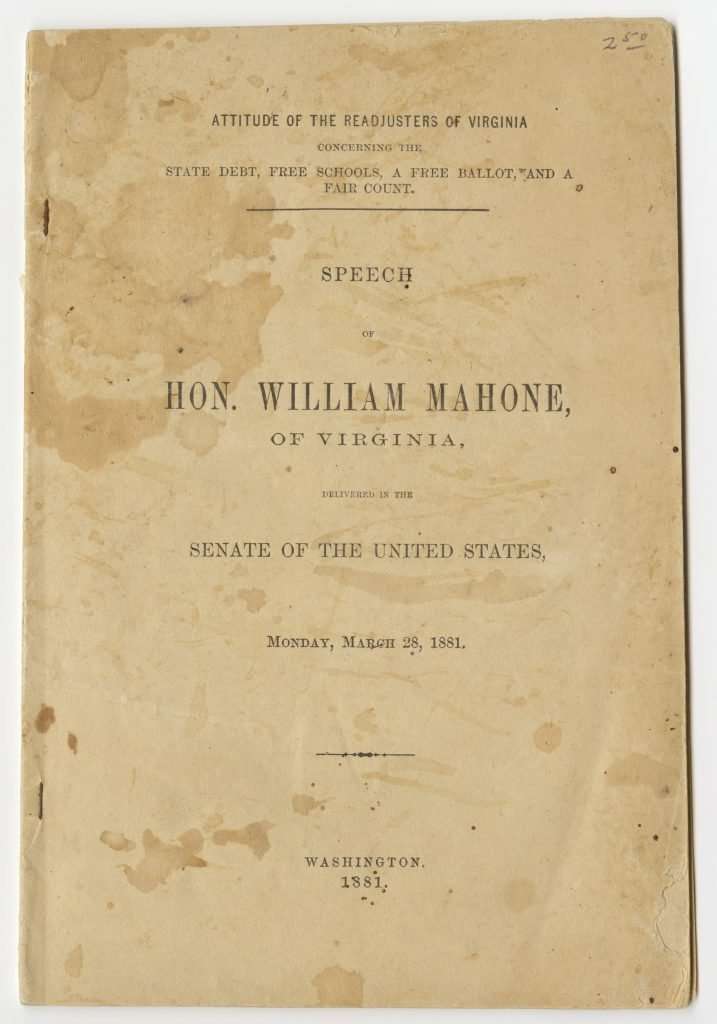 Virginia’s public debt was one of the most contentious political issues during the 1870s. The controversy split the dominant Conservative Party into Funders, who wanted to preserve the state’s honor and financial rating by paying off the debt in full, and Readjusters, who advocated refinancing at a lower interest rate or repudiating a portion of the debt and using the remaining revenue to support the new public school system and other public programs. Clark’s House term coincided with a lull in the struggle between the opposing camps. Black Republicans generally supported readjustment, and it is likely Clark joined his colleagues in opposing Funder policies. On March 25, 1875, he voted with the minority against a bill authorizing payment of the interest on the debt.

A split also developed within the Republican Party. African Americans grew dissatisfied with white party leaders who favored raising taxes to fund the debt and who withheld the best federal patronage offices for themselves. Frustrated, black legislators called in March 1875 for an election of delegates to a special convention to be held in Richmond beginning on August 19. About 100 representatives from more than forty counties and cities attended the three-day meeting. Clark, one of five Halifax County representatives at the convention, was appointed to the Committee on Rules. Delegates discussed a range of subjects including job scarcity and the wretched condition of black schools. The convention established the Laboring Men’s Mechanics’ Union Association, a short-lived statewide grassroots organization designed to further black economic and political interests.

Clark did not stand for reelection in 1875. In September 1878 he put his land and house in a deed of trust to secure a debt. Clark was unable to pay off the debt, and in March 1882 creditors forced the sale of his property at public auction. Two years later his personal property, consisting of a cow, two hogs, a clock, household furniture, and at least one weapon, was valued at $40. Clark and his wife had at least three sons and at least two daughters. His wife died of dropsy on April 13, 1876, and on December 30, 1879, Clark married nineteen-year-old Nannie Walker, also of Halifax County. They had at least two daughters and one son. The date and place of Matt Clark’s death are not known. His last appearance in the Halifax County public record is in the personal property tax list for 1892, when he owned a cow, three hogs, a watch, a clock, and a sewing machine with an aggregate value of $58.

RELATED CONTENT
Categories:
Type:
MAP
TIMELINE
1844
Sometime around this year, Matt Clark is born into slavery in Halifax County. He is the son of Mathew and Chaney Clark.
October 6, 1870
Matt Clark pays $154.12 for thirty-four acres of land at or near the township of Black Walnut in Halifax County.
May 22, 1873
Matt Clark is elected justice of the peace for the township of Black Walnut in Halifax County.
November 1873
Matt Clark, a Republican, is elected to one of Halifax County's three House of Delegates seats. He is one of two African Americans elected to that session of the House of Delegates.
March 1875
Frustrated by the state's handling of its debt, black members of the General Assembly call for an election of delegates to a special convention to be held in Richmond in August.
March 25, 1875
In the House of Delegates, Matt Clark votes with the minority against a bill authorizing payment of the interest on the state debt.
August 19, 1875
About 100 African Americans representing more than forty counties and cities attend a three-day meeting in Richmond to discuss statewide issues and their impact on Black Virginians.
April 13, 1876
Elizabeth Betts, wife of Matt Clark, dies of dropsy.
September 1878
Matt Clark puts his land and house in Halifax County in a deed of trust to secure a debt.
December 30, 1879
Matt Clark marries his second wife, nineteen-year-old Nannie Walker, also of Halifax County.
March 1882
Unable to pay off a debt secured by his land and house, Matt Clark sells his property at public auction.
1884
Matt Clark's personal property, consisting of a cow, two hogs, a clock, household furniture, and at least one weapon, is valued at $40.
1892
Matt Clark last appears in the public record, on a personal property tax list. His belongings are valued at $58.
FURTHER READING
CITE THIS ENTRY