George Freeman Bragg was born into slavery on January 25, 1863, in Warren County, North Carolina, the son of George Freeman Bragg, a carpenter, and Mary Bragg, a seamstress. At the age of two Bragg moved with his family to Petersburg, where his grandmother Caroline Wiley Cain Bragg lived. A devout Episcopalian, she was instrumental in the founding of Saint Stephen’s Episcopal Church in 1867, and her extended family composed a majority of the congregation. 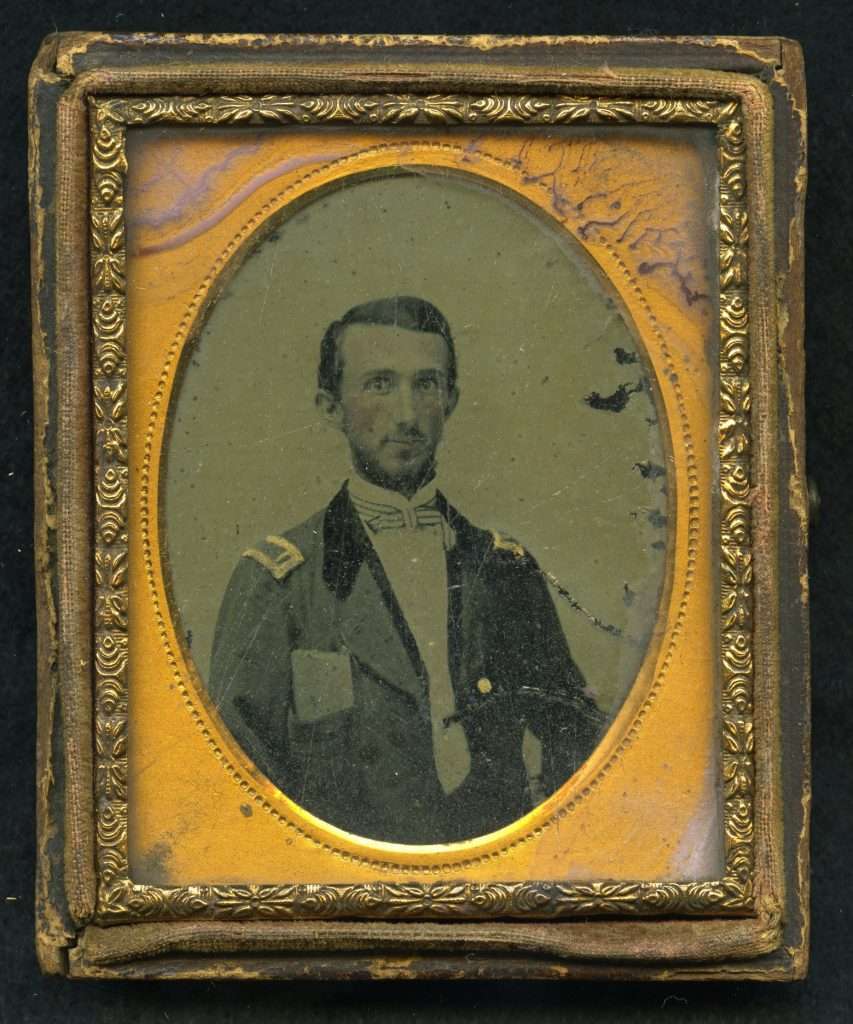 Bragg attended his family’s church and Saint Stephen’s Normal and Theological School as well, where he studied under Giles Buckner Cooke, a former Confederate staff officer and dedicated educator of freedpeople. Bragg also became involved in the field of journalism. From an early age he delivered newspapers and accordingly established relationships with prominent white residents of Petersburg, among them an editor of the Petersburg Index, John H. Chamberlayne, who in time gave him practical experience in every aspect of newspaper publishing. Chamberlayne also introduced Bragg to the world of Virginia politics, for the editor was a close ally of William Mahone, of Petersburg, who created the Readjuster Party and actively courted black voters.

Bragg moved quickly through the normal school at Saint Stephen’s and entered its theological department in the autumn of 1878. Six months later the church’s white rector expelled him for insufficient humility, just in time for Bragg to become caught up in the campaigns of the Readjusters. He worked at Mahone’s headquarters in Petersburg throughout the successful legislative campaign of 1881, assisting with distribution of literature and other political tasks. For his efforts Bragg was appointed a page in the 1881–1882 session of the House of Delegates.

On July 1, 1882, Bragg put his knowledge of journalism to work by founding a weekly newspaper, the Petersburg Lancet. Its first motto was “Sworn to no Party; of no Sect am I; I can be silent, but will not be.” The second issue’s motto altered the second portion to “I can’t be silent, but will not lie.” Bragg was concerned above all with civil rights, and he encouraged African Americans to become politically active in order to demonstrate and protect their citizenship. At that time black political activity in Virginia was closely tied to the Readjuster Party. In 1884, following the previous year’s electoral defeat for the Readjusters, a split developed between Mahone and black political leaders over the local congressional nomination. Mahone’s candidate, James D. Brady, defeated Joseph P. Evans, a black man, for the seat from the Fourth Congressional District, which included Petersburg. Bragg supported Evans and accused Mahone of dictatorial behavior concerned less with black rights than black votes. The nasty split and Evans’s subsequent loss disillusioned Bragg about politics. He blamed Evans’s defeat on Mahone’s corruption and on black voters’ willingness to be corrupted.

On September 12, 1885, Bragg announced that the Lancet would eschew partisan politics and instead urge blacks to concentrate on moral, educational, and commercial pursuits. Two months later it declared that it would henceforth focus on the activities of black Episcopalians. In January 1886 the paper adopted a new motto reflecting the change in Bragg’s outlook: “For what is a man profited, if he shall gain the whole world, and lose his own soul.” Beginning on February 6 of that year the paper appeared as the Afro-American Churchman, which was published for a time by Bragg’s younger sister Carrie Bragg.

Bragg’s journalistic shift coincided with his return to the seminary. A change in the rectorship at Saint Stephen’s Church allowed him to reenter what had become Bishop Payne Divinity and Industrial School in the autumn of 1885, and in July 1886 he gave up publication of the Afro-American Churchman. Ordained a deacon on January 12, 1887, Bragg took over the ailing Holy Innocents Episcopal Church in Norfolk, which depended on missionary support for survival. On December 19, 1888, he was ordained a priest at Saint Luke’s Episcopal Church in Norfolk, thus becoming only the twelfth black Episcopal priest in the United States. During his five years in Norfolk Bragg invigorated and expanded his congregation, making it into the fully self-supporting Grace Episcopal Church. He also established the Industrial School for Colored Girls and served from 1887 through 1890 on the board of Hampton Normal and Agricultural Institute. On September 20, 1887, Bragg married Nellie Hill, a member of another prominent family in Petersburg’s black community. They had two sons and two daughters. 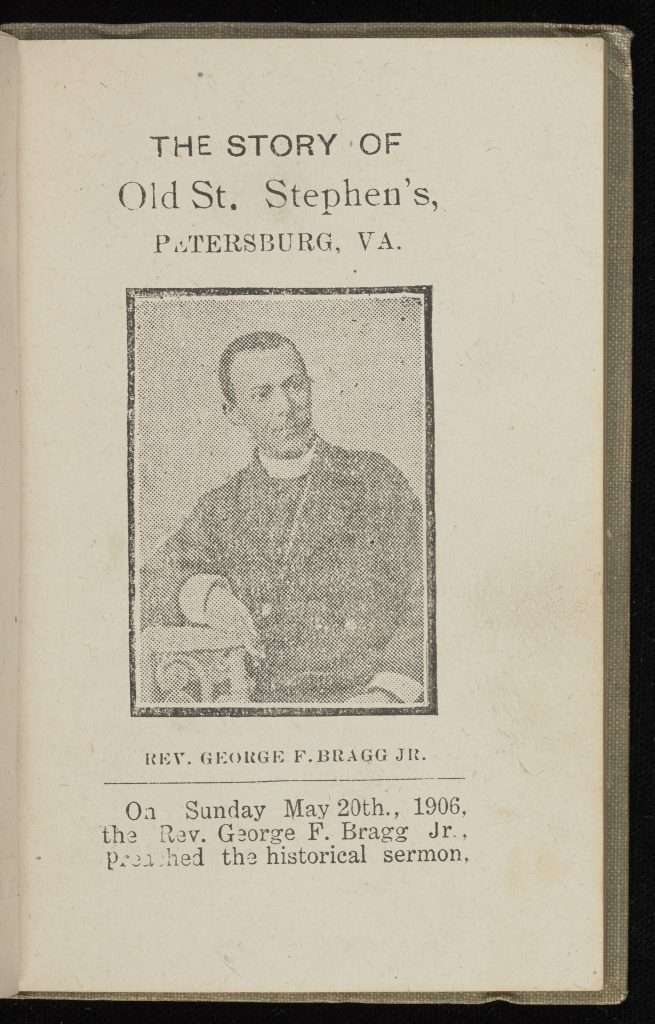 On November 17, 1891, Bragg was called to resurrect another church, the Saint James African Episcopal Church in Baltimore. Starting with sixty-nine members and dependent on financial aid from the bishop, he made the church self-sufficient, tripled the size of its congregation within a few years, and erected a new church building in 1901. Bragg helped establish the Maryland Home for Friendless Colored Children in 1899 and devoted much time to preparing twenty black men for the ministry. During his forty-eight years in Baltimore he returned to his roots in publishing by editing a monthly newspaper, the Church Advocate, and writing and printing more than a score of books and pamphlets, several of which dealt with the history of blacks in Virginia. His most important works included The Colored Harvest in the Old Virginia Diocese (1901), Afro-American Church Work and Workers (1904), The Story of Old St. Stephen’s, Petersburg, Va. (1906), A Bond-Slave of Christ: Entering the Ministry Under Great Difficulties (1912), History of the Afro-American Group of the Episcopal Church (1922), and The Hero of Jerusalem (1926), which commemorated the centennial of the birth of William Mahone. 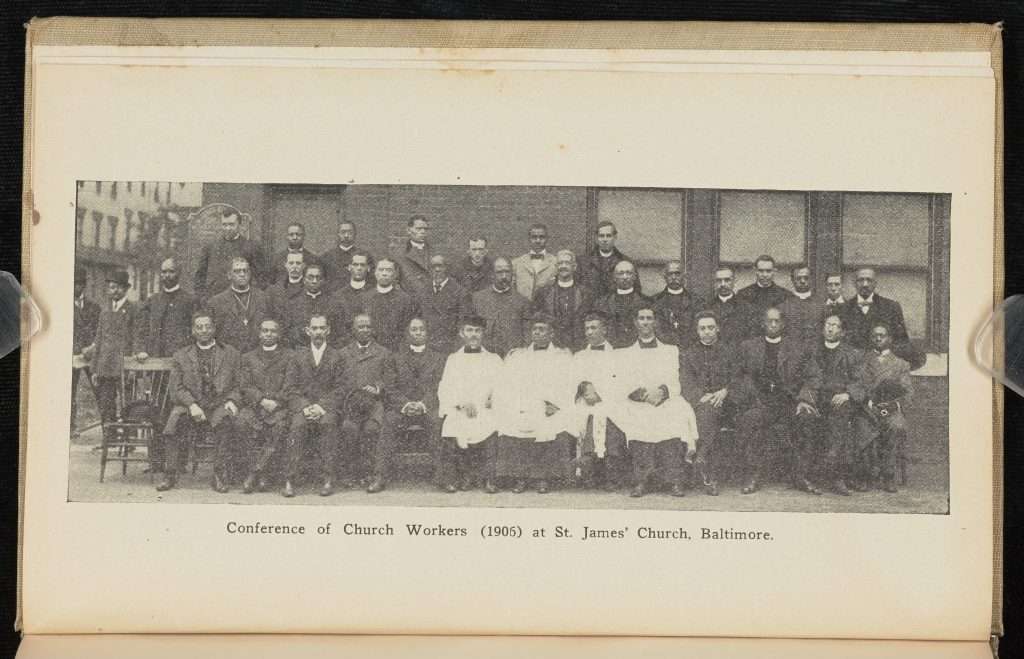 In recognition of Bragg’s contributions to the church and to black historiography, Wilberforce University awarded him an honorary D.D. in 1902. He was a central figure in the Conference of Church Workers Among the Colored People, the national black Episcopal organization, which argued that the appointment of black bishops would increase the number of African Americans in the church. Twice Bragg was proposed for elevation to bishop. He was suggested as bishop of Haiti in 1911 and as suffragan bishop of Arkansas in 1917 but was not selected either time.

Bragg continued his ministry at Saint James Church until his death at Provident Hospital in Baltimore on March 12, 1940, following a brief respiratory illness.