Charles Wesley Andrews was born on July 27, 1807, in Pittsford, Vermont, the son of Zelotus Andrews and Betsy Andrews. His father died when he was six, and the austere piety of his Congregationalist mother had an important influence on him. Andrews was educated at Castleberry Academy in Rutland and at Middlebury College. There he may have developed symptoms of the tubercular condition he suffered from later, and in June 1827 he moved to Virginia for his health. He served as a tutor for the families of Richard Kidder Meade and William Strother Jones in Frederick County.

Andrews was drawn to the Episcopal Church under the influence of William Meade, who later served as bishop of Virginia, and his sister Ann Randolph Meade Page. Andrews’s temperament and training were well suited to Meade’s evangelical approach, which stressed a conversion experience followed by a personal relationship with God, a life of moral discipline, identification with the evangelical community, missionary enterprise, and religious reform. Andrews was ordained into the Episcopal ministry at Alexandria on May 20, 1832.

On February 28, 1833, Andrews married Ann Page’s daughter Sarah Walker Page, who manumitted her slaves on the day of the marriage. They had one son and two daughters, and they also raised two of her nieces. Andrews soon became active in the American Colonization Society, which promoted the immigration of free African Americans to the colony of Liberia. The society was suited particularly well to the concerns of Andrews and other evangelical Episcopalians, as it combined their zeal to convert Africans with their desire to end slavery in Virginia. Evangelicals also sought to revitalize the Episcopal Church by infusing it with the energy of personal conviction and righteous living. Andrews and Meade were part of a national Episcopal evangelical movement critical of rigid church doctrine and high church ritual.

Andrews’s reform work illustrates the intersection of evangelicalism and moral issues with nineteenth-century American politics. He regarded slavery as an individual sin and believed that slaveholders could be persuaded to emancipate their slaves once they saw the system as evil. With his fellow evangelical colonizationists Andrews was unshaken by arguments that sending all black Virginians to Africa was a practical impossibility. He was also a leader in the temperance movement and preached against dancing, the theater, and the use of tobacco. The self-discipline that Andrews championed reflected an evangelical world view that accorded well with the Whig Party‘s campaigns for order and commercial development.

Andrews was Meade’s assistant from 1832 to 1835 in Millwood Parish in the part of Frederick County that soon became Clarke County. From 1835 to 1837 he served as general agent for the American Colonization Society, and from 1838 to 1841 he was pastor of Saint Andrew’s Parish in Pittsburgh. His health once again failing, Andrews took a yearlong tour of Europe and the Near East, returning to Virginia in 1842 to become rector of Trinity Church in Shepherdstown. He supervised the erection of a new church at the end of the 1850s and later deeded the old church to the local African Methodist Episcopal church. Andrews served as president of the Episcopal church’s Convocation of the Valley of Virginia from 1850 to 1875. He was also an officer of the Evangelical Knowledge Society and before the Civil War an editor of the Parish Visitor.

Although a product of New England and a leader of a moral crusade in harmony with northern-style industrialization, Andrews feared that both massive immigration to the northern states and slavery in the southern states threatened American order. He opposed secession in 1861 but remained loyal to Virginia during the Civil War, believing that the old union had been corrupted by foreigners who had been given citizenship but who had not yet learned self-restraint through religion. He expressed this opinion forcefully in a August 1, 1861, letter to Charles P. McIlvaine, bishop of Ohio, that appeared as a pamphlet the same year.

The Civil War strained but did not break ties between northern and southern evangelicals in the Episcopal Church. Andrews and others resumed attacks on high church doctrine and ritual after the war. Continued doctrinal disputes over communion and baptism, the hymnal, and temperance led to the division of the church and the formation of the Reformed Episcopal Church in the year of Andrews’s death. 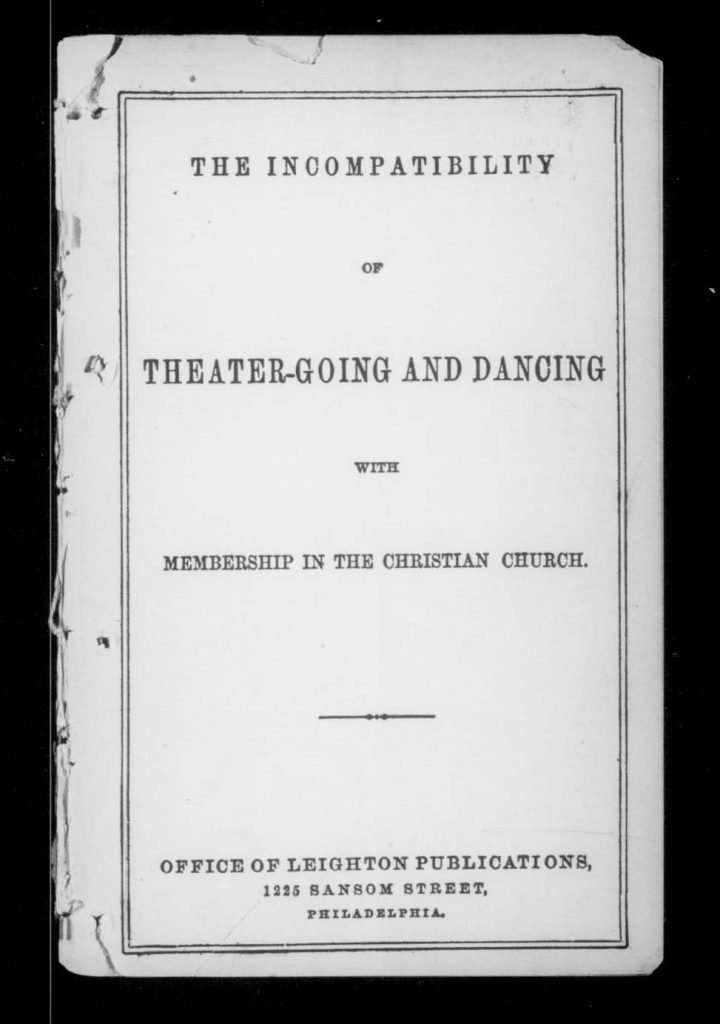 The Incompatibility of Theater-Going and Dancing with Membership in the Christian Church.

Besides sermons, tracts, pamphlets, and essays, Andrews’s major publications were Memoir of Mrs. Anne R. Page (1844), which extolled her antislavery views; Historic Notes of Protestant Missions to the Oriental Churches (1866); The Relationship of Christianity to Education (1867); The Remembrance Which the Christian People Owe to Their Ministers (1868); “Baptismal Regeneration”: A Review of the Controversy, With Thoughts on theDuty of the Evangelical Portion of the Episcopal Church at the Present Time, Touching the Toleration of Ritualism (1869); On the Incompatibility of Theatre-Going and Dancing with Membership in the Christian Church (1871); and Notes on the State of the Church. Also on the Question of Revision (1874).

Sarah Page Andrews died on January 30, 1863, and Andrews married Nannie Boteler, the widow of Charles Boteler, on March 12, 1865. Andrews died on May 24, 1875, at Fredericksburg while on his way to attend a church convention in Richmond. He was buried in Elmwood Cemetery in Shepherdstown.