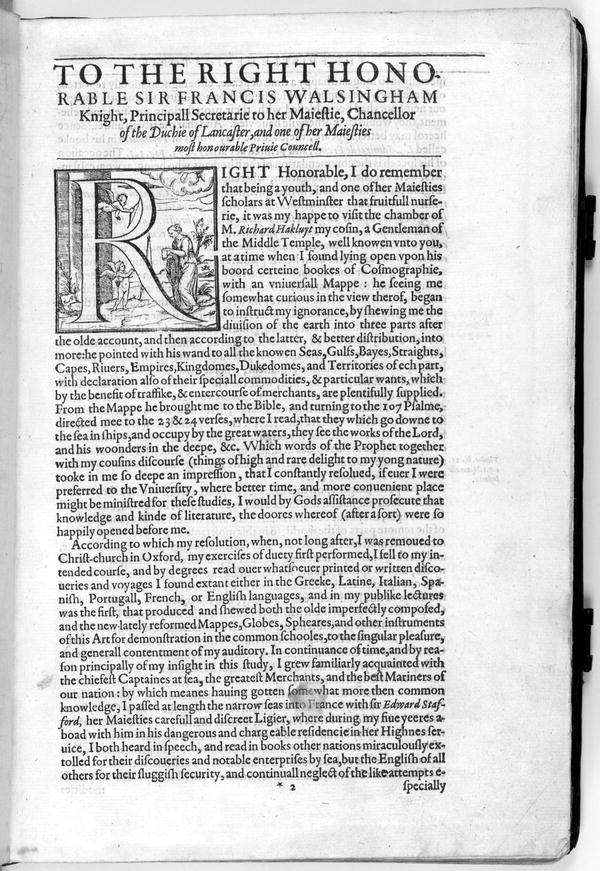 TO THE RIGHT HONORABLE SIR FRANCIS WALSINGHAM Knight, Principall Secretarie to her Majestie, Chancellor of the Duchie of Lancaster, and one of her Majesties most honourable Privie Councell.

RIGHT HONORABLE, I do remember that being a youth, and one of her Majesties scholars at Westminster that fruitfull nurserie, it was my happe to visit the chamber of M. Richard Hakluyt my cosin, a Gentleman of the Middle Temple, well knowen unto you, at a time when I found lying open upon his boord certeine bookes of Cosmographie, with an universall Mappe: he seeing me somewhat curious in the view therof, began to instruct my ignorance, by shewing me the division of the earth into three parts after the olde account, and then according to the latter, & better distribution, into more: he pointed with his wand to all the knowen Seas, Gulfs, Bayes, Straights, Capes, Rivers, Empires, Kingdomes, Dukedomes, and Territories of ech part, with declaration also of their special commodities, & particular wants, which by the benefit of traffike, & entercourse of merchants, are plentifully supplied. From the Mappe he brought me to the Bible, and turning to the 107 Psalme, directed mee to the 23 & 24 verses, where I read, that they which go downe to the sea in ships, and occupy by the great waters, they see the works of the Lord, and his woonders in the deepe, &c. Which words of the Prophet together with my cousins discourse (things of high and rare delight to my yong nature) tooke in me so deepe an impression, that I constantly resolved, if ever I were preferred to the University, where better time, and more convenient place might be ministred for these studies, I would by Gods assistance prosecute that knowledge and kinde of literature, the doors whereof (after a sort) were so happily opened before me.

According to which my resolution, when, not long after, I was removed to Christ-church in Oxford, my exercises of duety first performed, I fell to my intended course, and by degrees read over whatsoever printed or written discoveries and voyages I found extant either in the Greeke, Latine, Italian, Spanish, Portugall, French, or English languages, and in my publike lectures was the first, that produced and shewed both the olde imperfectly composed, and the new lately reformed Mappes, Globes, Spheares, and other instruments of this Art for demonstration in the common schooles, to the singular pleasure, and generall contentment of my auditory. In continuance of time, and by reason principally of my insight in this study, I grew familiarly acquainted with the chiefest Captaines at sea, the greatest Merchants, and the best Mariners of our nation: by which meanes having gotten somewhat more then common knowledge, I passed at length the narrow seas into France with sir Edward Stafford, her Majesties carefull and discreet Ligier, where during my five yeeres aboad with him in his dangerous and chargeable residencie in her Highnes service, I both heard in speech, and read in books other nations miraculously extolled for their discoveries and notable enterprises by sea, but the English of all others for their sluggish security, and continuall neglect of the like attempts e- 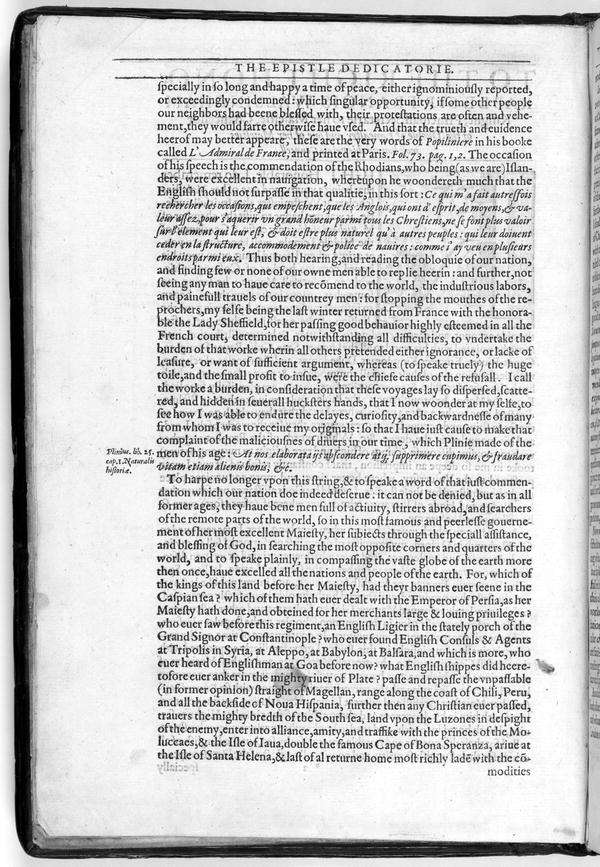 specially in so long and happy a time of peace, either ignominiously reported, or exceedingly condemned: which singular opportunity, if some other people our neighbors had beene blessed with, their protestations are often and vehement, they would farre otherwise have used. And that the trueth and evidence hereof may better appeare, these are the veery words of Popiliniere in his booke called L’Admiral de France, and printed at Paris. Fol. 73 pag. 1, 2. The occasion of his speech is the commendation of the Rhodians, who being (as we are) Islanders, were excellent in navigation, whereupon he woondereth much that the English should not surpasse in that qualitie, in this sort […] Thus both hearing, and reading the obloquie of our nation, and finding few or none of our owne men able to replie herein: and further, not seeing any man to have care to recomend to the world, the industrious labors, and painefull travels of our countrey men: for stopping the mouthes of the reprochers, my selfe being the last winter returned from France with the honorable the Lady Sheffield, for her passing good behavior highly esteemed in all the French court, determined notwithstanding all difficulties, to undertake the burden of that worke wherin all others pretended either ignorance, or lacke of leasure, or want of sufficient argument, whereas (to speake truely) the huge toile, and the small profit to insue, were the chiefe causes of the refusall. I call the worke a burden, in consideration that these voyages lay so dispersed, scattered, and hidden in several hucksters hands, that I now woonder at my selfe, to see how I was able to endure the delayes, curiosity, and backwardnesse of many from whom I was to receive my originals: so that I have just cause to make that complaint of the maliciousness of divers in our time, which Plinie made of the men of his age: At nos elaborata ys abscondere ac supprimere cupimus, & fraudare vitam etiam alienis bonis, &c.

RELATED CONTENT
Categories:
Type:
FURTHER READING
“The people of America crye oute unto us”; an excerpt from Discourse on Western Planting by Richard Hakluyt (the younger) (1584)
CITE THIS ENTRY