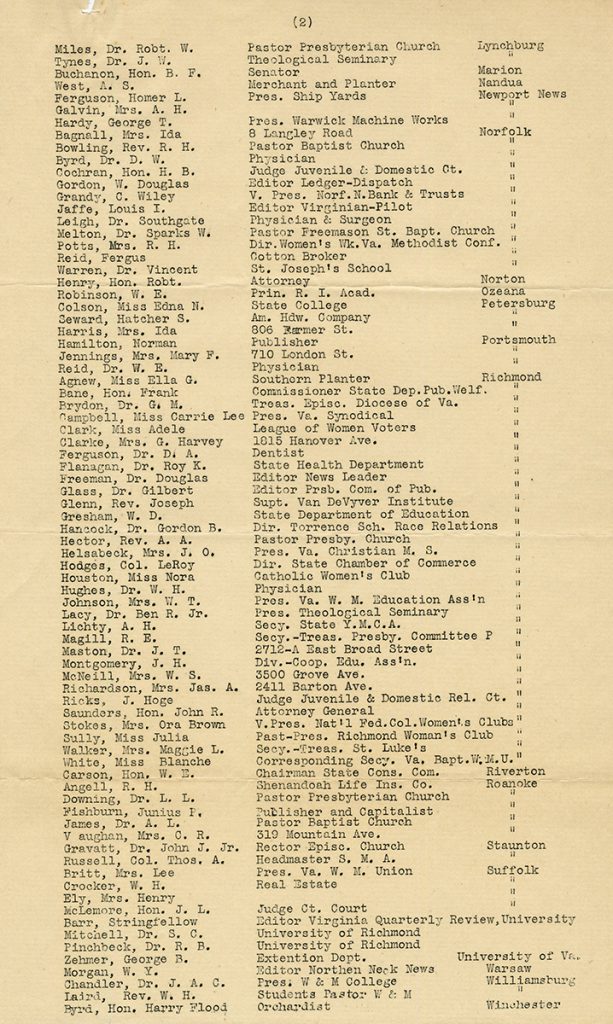 This is the second of a two-page list of officers and executive committee members of the Virginia Commission on Interracial Cooperation, an organization dedicated to improving race relations. The members listed here—both Black and white—include a number of educators, ministers, doctors, attorneys, court officials, newspaper editors, business leaders, and politicians. Among those listed are Louis I. Jaffé, editor of the Norfolk Virginian-Pilot, a progressive journalist noted for his public campaign against lynching; Ora Brown Stokes, a community organizer in Richmond and vice-president of the Virginia State Federation of Colored Women's Clubs; Maggie Lena Walker, a prominent African American entrepreneur and civic leader; Adèle Clark, an artist, woman suffragist, and head of the Virginia League of Women Voters (an organization which barred Black women from membership during her tenure); and Nora Houston, Adèle Clark's lifelong partner and fellow activist. The final name on the list is Harry Byrd Flood, the Democratic politician who headed the political machine known as the Byrd Organization for forty years. He is identified here as an "orchardist" in Winchester, which probably dates this document to circa 1930–1932, the brief hiatus between his holding office as governor of Virginia and as a member of the U.S. Senate. Byrd became a powerful force opposing civil rights legislation in the 1950s and 1960s. Byrd coined the term "Massive Resistance," and was a major advocate of that policy, which involved closing Virginia schools for years rather than integrating them.