Barrett was born in Athens, Georgia, on August 9, 1865, the daughter of Julia Porter, an African American domestic servant and seamstress. The name of her father, who may have been white, is unknown. She grew up in Macon, Georgia, where her mother worked for a northern white woman named Skinner who treated the child almost as a member of the family. After Julia Porter married and moved to her own home, Janie Porter remained in the Skinner household. Julia Porter evidently turned down an offer by Skinner to send her daughter north to school, where she might have passed into the white world and left her family forever.

Instead, Janie Porter’s mother sent her to Hampton Normal and Agricultural Institute, the first of the self-help, vocational training schools for freedpeople. Porter initially had difficulty adjusting to life in a school whose students largely came from rural backgrounds. In later years she attributed her desire to serve her fellow African Americans to Sir Walter Besant’s All Sorts and Conditions of Men: An Impossible Story, a utopian novel published in 1882 in which an heiress worked to help the poor of London.

After Porter completed her studies at Hampton in 1884 she taught in a poor rural county in southwestern Georgia. For a year she enjoyed teaching there despite the challenging circumstances, but a chance to return to Hampton to teach in the night school proved irresistible. After the 1887–1888 session she moved on to Lucy Laney’s Haines Normal and Industrial Institute in Augusta, Georgia, an academically ambitious high school for Black students. Laney, a member of the first graduating class of Atlanta University, was one of many dedicated teachers who sought to give a new generation of African Americans a way to rise in the world by plain living, high thinking, cleanliness, and godliness coupled with academic and vocational training.

Porter returned to Hampton again and on October 31, 1889, married Harris Barrett, a fellow Hampton graduate who worked as a cashier and bookkeeper at the school and became an influential entrepreneur in the town. They lived in Hampton and had one son and three daughters. Rather than becoming another comfortable member of the developing Black bourgeoisie, however, Janie Porter Barrett formed a sewing class for neighborhood girls that inspired the formation of other groups. She drew in their mothers, and soon the Locust Street Social Settlement took shape. Just as Jane Addams and Ellen Starr opened the doors of Hull House to their immigrant neighbors in Chicago, Barrett opened hers to her Black neighbors. During the next twenty years the settlement reached into every part of the Hampton community. Clubs and classes devoted to mothering, cooking, gardening, poultry raising, quilting, and rug weaving met every afternoon and evening. She encouraged children to play athletic games and worked to improve the community. When the settlement outgrew their own house, the Barretts built a clubhouse on their land.

Locust Street typified the growing number of institutions Black people were creating for themselves, paralleling similar developments in white society. Another was the National Association of Colored Women, formed in 1896, which encouraged local clubs to organize state federations. In 1908 Barrett helped found the Virginia State Federation of Colored Women’s Clubs, and she served as its president until 1932. 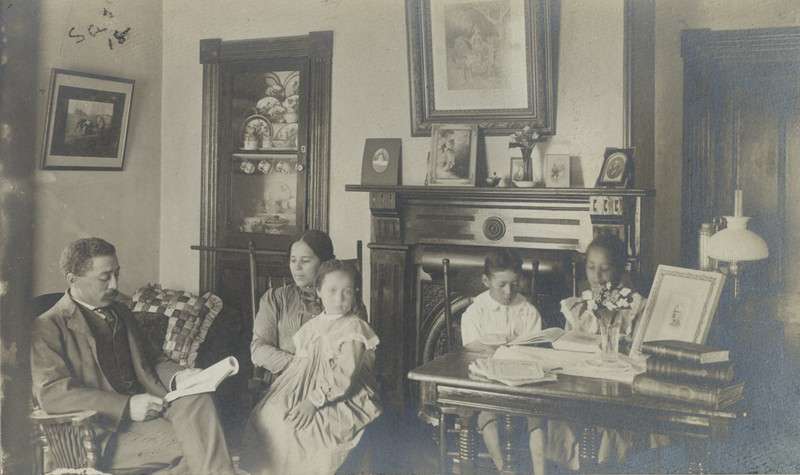 Janie Porter Barrett at Home with Her Family

Barrett’s concern for young girls may have been inspired by the contrast between the nurturing environment available to her own children and the horrendous conditions in which many Black youngsters were struggling to grow up. She often told of finding an eight-year-old girl in jail and becoming convinced of the need for a home for what were then called wayward girls. Barrett challenged the federation she headed to take up the cause and traveled around the state collecting small donations. In 1912 the National Association of Colored Women met in Hampton, which gave her an opportunity to develop wider support and provided an additional source of funds. By 1913 she had enlisted the aid of a small nucleus of white Virginia women, who were perhaps urged on by Mary-Cooke Branch Munford, a prominent white clubwoman from Richmond particularly interested in Black education. Barrett always gave due credit to the white women and their clubs, though she recognized the greater constancy of her Black supporters. 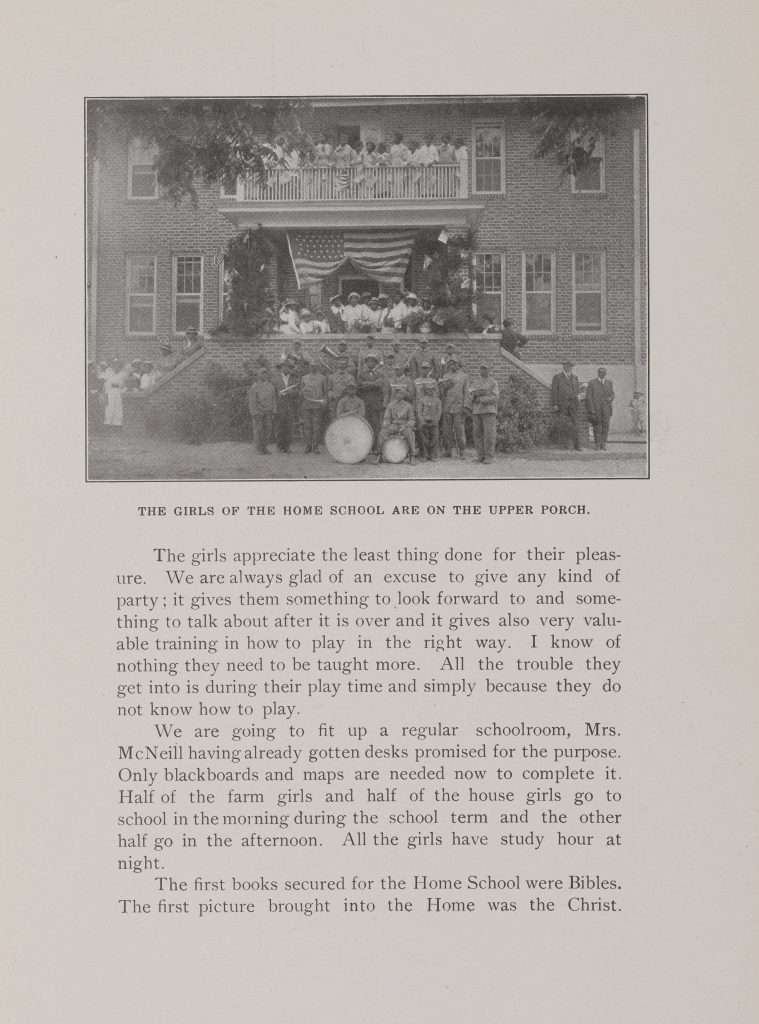 Dedication Ceremony for the Industrial Home School for Colored Girls

As money began to come in, Barrett sought advice from the new Russell Sage Foundation, itself an interesting example of the growing influence of women on social reform. The Virginia State Federation of Colored Women’s Clubs raised more than $5,000 and bought a farm at Peaks, in Hanover County north of Richmond, to build the school for girls.

White residents near the proposed site of the school objected, but Barrett promised to take charge of the school as its first superintendent and to move it if it proved a nuisance to the neighbors. The objections satisfied, the General Assembly appropriated $3,000 for the Industrial Home School for Colored Girls, later the Virginia Industrial School for Colored Girls, and it opened its doors in January 1915. The Virginia State Federation of Colored Women’s Clubs owned and governed the school, which had a large board of visitors composed of whites and Blacks. During the campaign to raise money, Harris Barrett died of a stroke on March 26, 1915.

Skills Taught at the Virginia Industrial School for Colored Girls

The school embodied nineteenth-century female values. Barrett emphasized that it was a home rather than a prison and instituted a carefully structured system of rewards instead of punishment. Her purpose was to build Christian character. She strictly regulated the behavior of the girls and taught them household and agricultural skills so that they could support themselves as domestic servants or farm workers until they established homes of their own. Though Barrett patterned the educational philosophy of the school in some ways on those of Hampton and Tuskegee Institute, she was an unusually gifted and sensitive superintendent who stamped her own personality on the school. She believed in trusting the pupils and ran the school on the honor system. In a typical instance of her methods, when World War I created a shortage of agricultural laborers Barrett offered the services of her girls to help neighboring farmers bring in their harvests in exchange for a share of the crops, thereby creating a body of enthusiastic supporters for the school. She also tried to prevent the exploitation of former students by employers in search of cheap labor. Year after year in carefully worded statements she criticized families, Black and white, who failed to offer adequate support and encouragement to the young women who lived and worked in their homes. 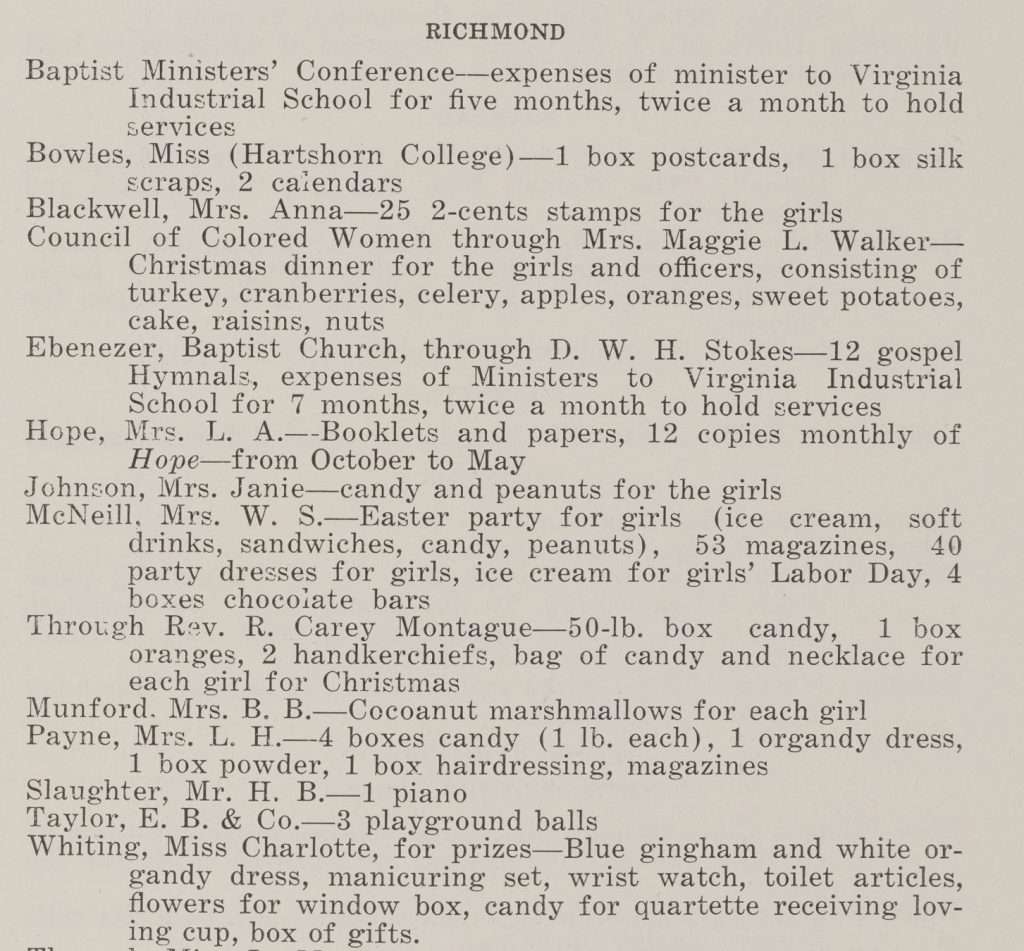 Gifts for the Virginia Industrial School for Colored Girls

Barrett’s ability to work with white women, facilitated perhaps by her upbringing, probably contributed to the growing support she garnered in the General Assembly and to her ability to raise money from private sources. The cooperation of women like Barrett and Munford enabled Virginia, probably more than any other former Confederate state, to develop strong ties between white and Black clubwomen. The African American banker Maggie Lena Walker also gave generously to the school and organized a Council of Colored Women in Richmond, which took responsibility for such activities as an annual Christmas dinner for the girls and staff. Little by little, the successful school received recognition and praise. In the mid-1920s the Russell Sage Foundation identified it as one of the five best such schools in the country.

Members of the Virginia Commission on Interracial Cooperation

In 1920 the state took over basic responsibility for the school, though the federation continued to be its mainstay and Barrett continued to manage it until she retired in 1940. She remained bold and innovative. In 1938 she wrote that she stressed training in citizenship and that “voting is a duty as well as a right.” At that time it took some courage to tell the government of Virginia that Black women were being prepared to be voters.

In the 1920s Barrett took an active part in the Virginia Commission on Interracial Cooperation and in the Richmond Urban League. She served for four years as chairman of the executive board of the National Association of Colored Women, and in 1929 she received the William E. Harmon Award for Distinguished Achievement among Negroes. A year later she was invited to take part in the White House Conference on Child Health and Protection. 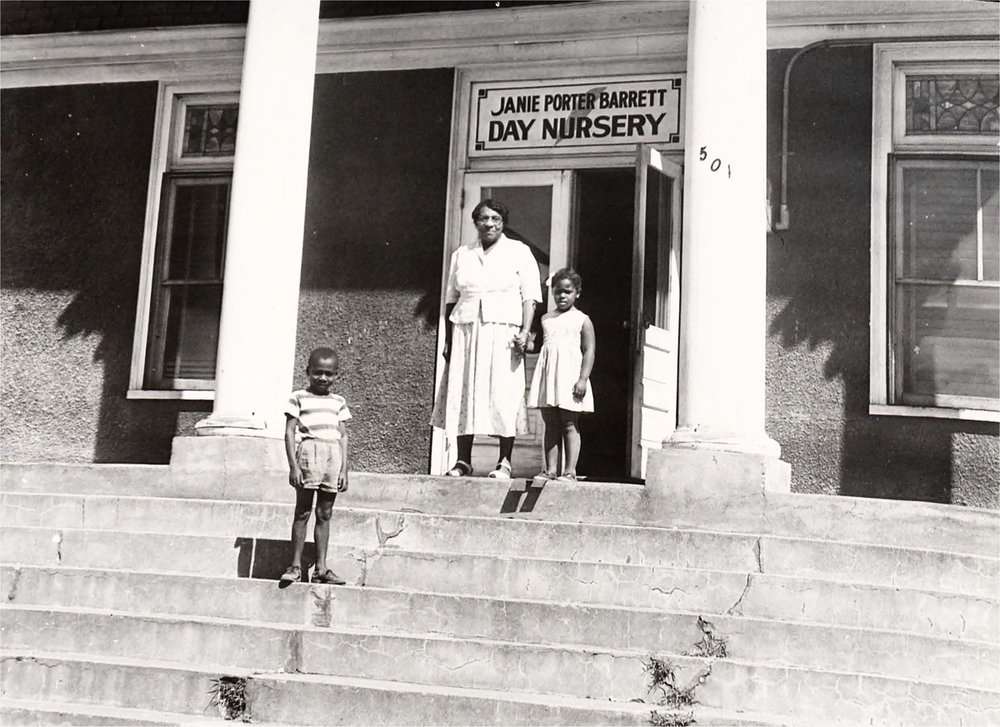 Returning to Hampton on her retirement in 1940, Barrett died on August 27, 1948, of diabetes and arteriosclerosis in Hampton Institute’s Dixie Hospital and was buried in Elmerton Cemetery in Hampton. Two years after her death the General Assembly renamed the school she had founded the Janie Porter Barrett School for Girls. The Janie Porter Barrett School for Girls was integrated in 1965 (and became coeducational in 1972), an appropriate legacy in light of the work of its founding mother to bring about interracial understanding. With a reorganization of the state’s correctional system in 1977, the school became the Barrett Learning Center for boys until its closure in 2005. 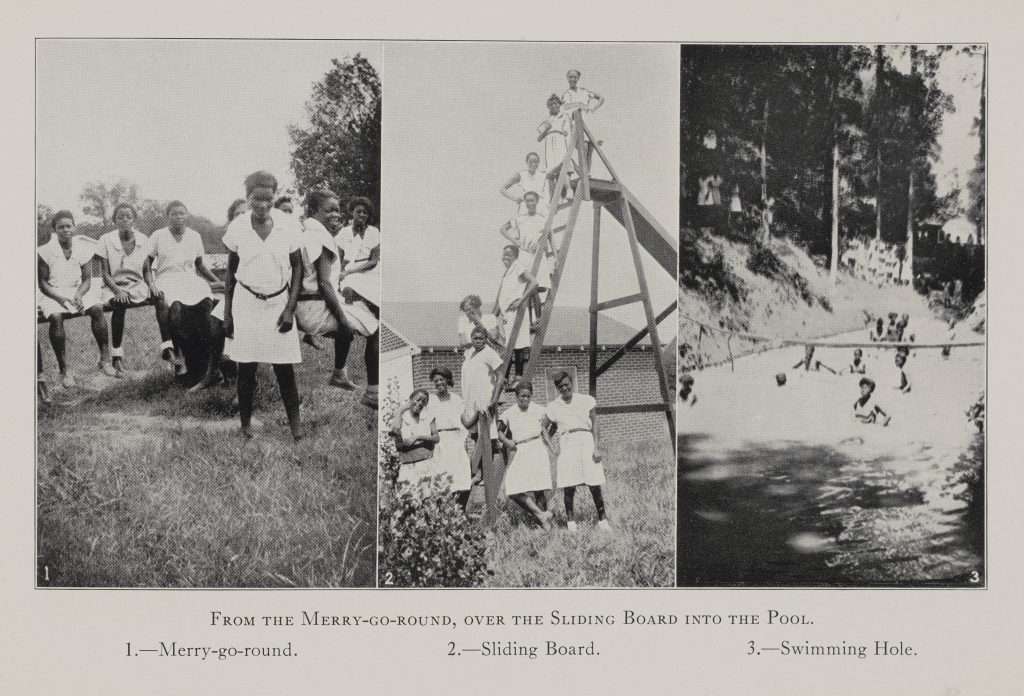 From the Merry-Go-Round, Over the Sliding Board Into the Pool. 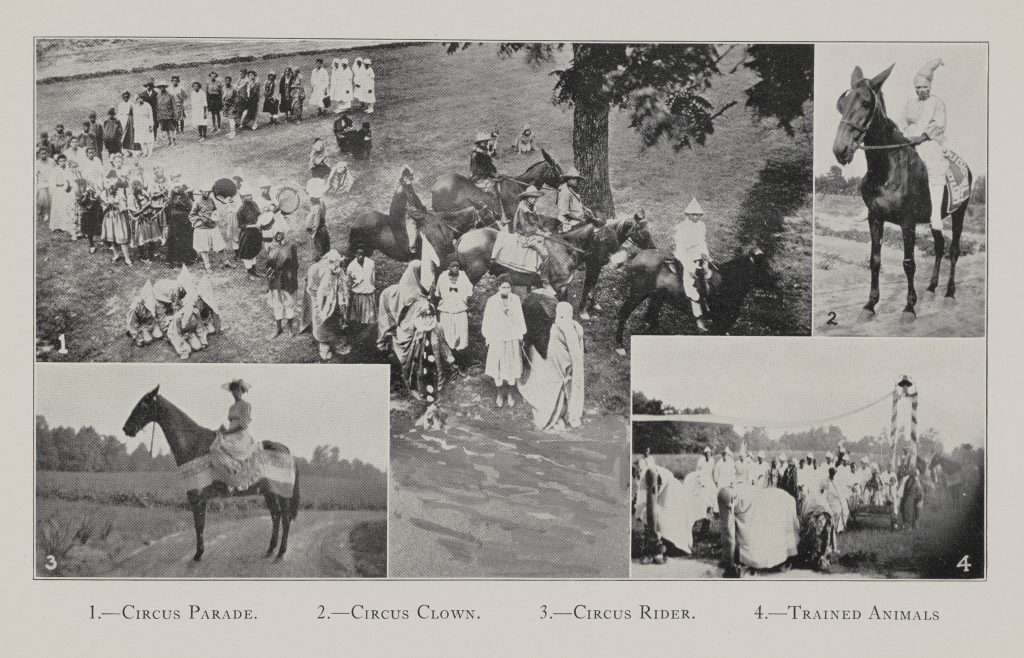 Entertainment at the Virginia Industrial School for Colored Girls 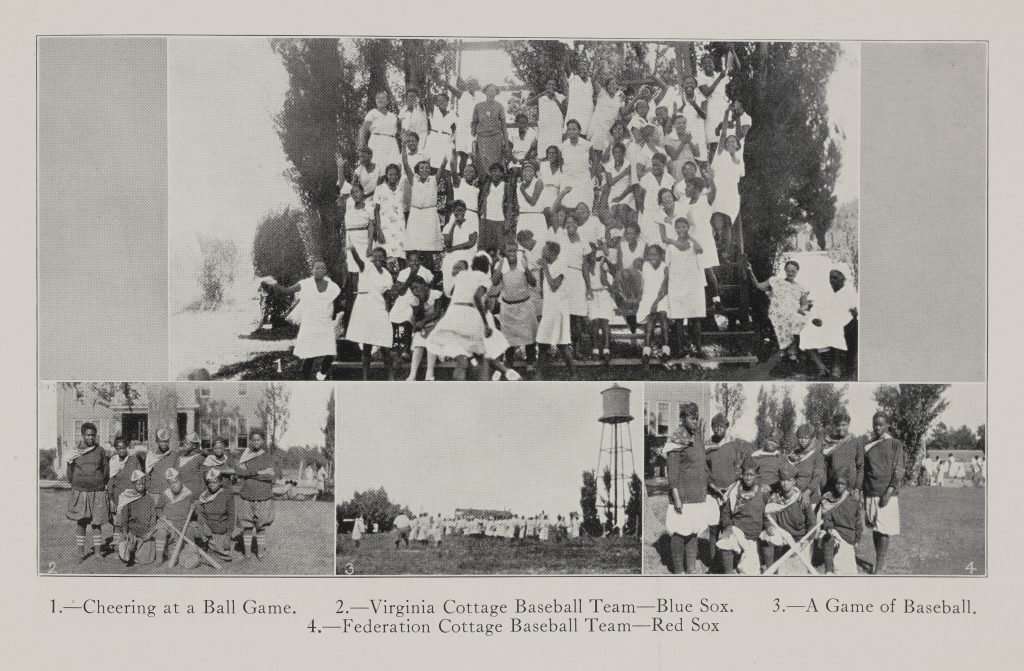 Janie Porter graduates from the Hampton Normal and Agricultural Institute, the first of the self-help, vocational training schools for freedpeople.

1888–1889
Janie Porter teaches at Lucy Laney's Haines Normal and Industrial Institute in Augusta, Georgia, an academically ambitious high school for Black students.
October 31, 1889
Janie Porter marries Harris Barrett, a fellow Hampton graduate who worked as a cashier and bookkeeper at the school and becomes an influential entrepreneur in Hampton. They have one son and three daughters.
1890