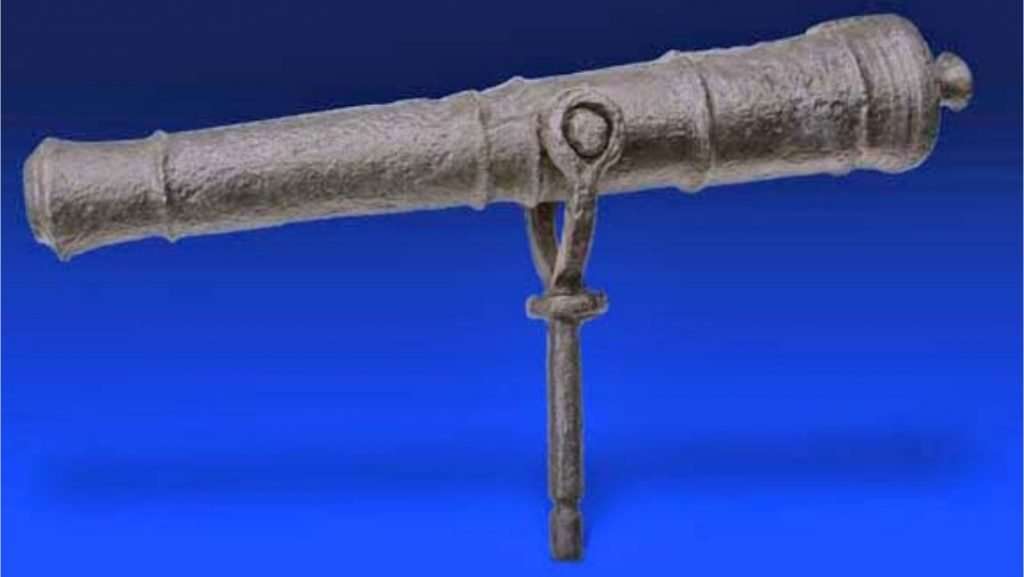 This Revolutionary War-era iron swivel gun is believed to be from the tender Liberty that was attached to the British sloop HMS Otter. (A tender is a supply boat for a larger vessel.) The Liberty, with Captain Matthew Squire of the Otter on board, was driven aground near Hampton during a hurricane on September 2, 1775. The tender was later vandalized and burned by the local inhabitants. The September 8, 1775, edition of the Virginia Gazette (Purdie & Dixon) stated that the residents of Hampton took this action "in return for [Captain Squire's] harbouring gentlemen's negroes, and suffering his sailors to steal poultry, hogs, &c. Two of the crew were runaway slaves from Col. Wilson Miles Cary's quarters in King & Queen, who were taken soon after they got ashore; and his pilot, a mullatto man, was the property of Henry King, esq; of Hampton, with whom, after skulking in the woods about 48 hours, he found means to paddle off in a canoe."

Captain Squire demanded the return of the stolen material, which included six swivel guns—this probably being one of them. When the local inhabitants failed to comply, Squire attacked Hampton on October 26, 1775—the first battle of the Revolutionary War to take place south of Massachusetts at that point. Squire was met with heavy fire and forced to retreat, and nine Blacks and British sailors were killed during the encounter.