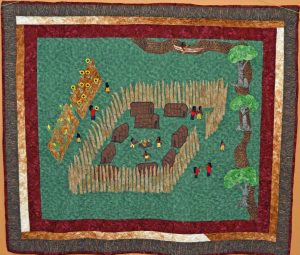 Denise Lowe Walters, a member of the Nottoway Indian Tribe of Virginia, created this quilt in 2021 and describes it as follows:

This quilt represents the Nottoway Great Town in the early 1700’s as described by William Byrd but from my perspective as a Nottoway woman. I imagined the time of the green corn ceremony. The men are preparing the fire for ceremony, while women and children, keepers of the gardens, are gathering the corn and sunflowers. A recently married couple, holding hands, is anticipating the social dancing to come. Most of the men have already returned from hunting and fishing, and food is being prepared for the feast. One lone man comes back in his canoe, later than the others, but not too late for the celebration. Another man, the storyteller, decides he needs a few moments alone in the woods to think clearly to remember the old stories that he will tell the children later. Two women stand outside the fence, discussing the peak that was gifted to them by a cousin who left with some of the Tuscarora to travel north, never to be seen in Nottoway Territory again. I imagined a village alive with people, traditions, stories, songs, dances, and hopes for the future. It is the people, ękwehę̀·we, that make the village.