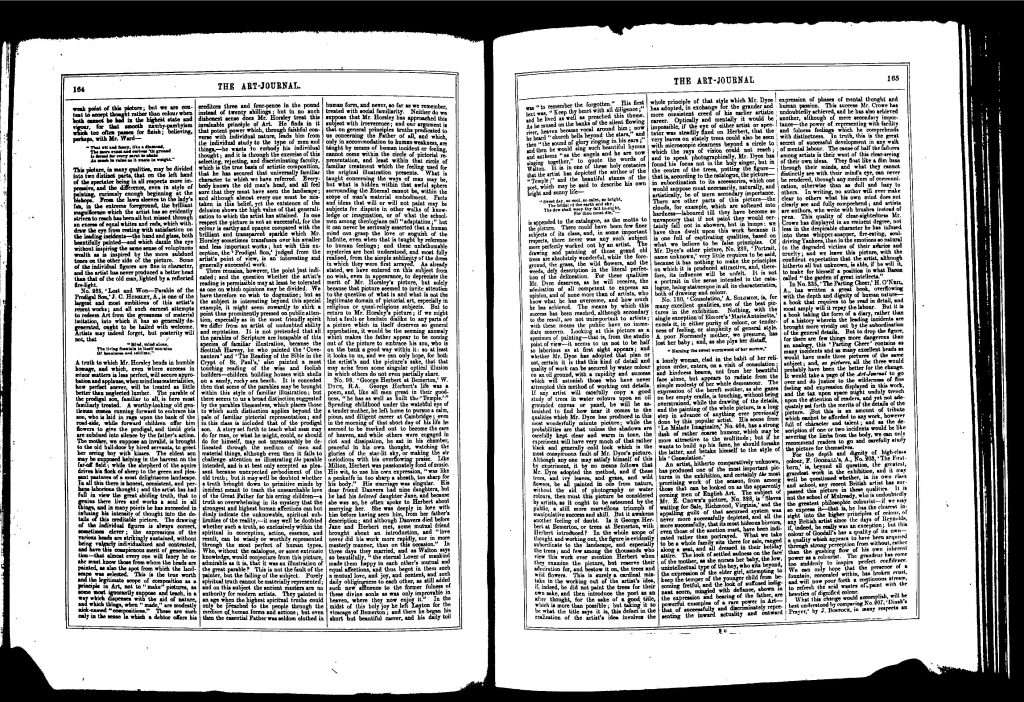 An artist, hitherto comparatively unknown, has produced one of the most important pictures in the exhibition, and certainly the most promising work of the season, from among those that can be looked on as the apparently coming men of English Art. The subject of Mr. E. Crowe‘s picture, No. 328, is ‘Slaves waiting for Sale, Richmond, Virginia,’ and the appalling guilt of that accursed system was never more successfully depicted, and all the more successfully, that its most hideous horrors, even those of the auction mart, have been indicated rather than portrayed. What we take to be a whole family sits there for sale, ranged along a seat, and all dressed in their holiday attire. The look of settled sadness on the face of the mother, as she nurses her baby, the low, unintellectual type of the boy, who sits beyond, the expression of the elder girl, attempting to keep the temper of the younger child from becoming fretful, and the look of suffused indignant scorn, mingled with defiance, shown in the expression and bearing of the father, are powerful examples of a rare power in Art—that of successfully and discriminately representing the inward actuality and outward expression of phases of mental thought and human passion. This success Mr. Crowe has undoubtedly achieved, and he has also achieved another, although of mere secondary importance—the power of representing with facility and fulness feelings which he comprehends with distinctness. In truth, this is the great secret of successful development in any walk of mental labour. The cause of half the failures among artists is their want of this clear-seeing of their own ideas. They float like a dim haze through their minds, and what they cannot distinctly see with their mind’s eye, can never be rendered, through any medium of communication, otherwise than as dully and hazy to others. In writing, no author will ever make clear to others what his own mind does not clearly see and fully comprehend; and artists are authors, who write with brushes instead of pens. This quality of clear-sightedness Mr. Crowe has displayed in an eminent degree, not less in the despicable character he has infused into these whipper-snapper, fire-eating, soul-driving Yankees, than in the emotions so natural to the degraded victims of their avarice and cruelty; and we leave this picture, with the confident expectation that the artist, although hitherto all but unknown, is able, if he will it, to make for himself a position in what Bacon called “the garden of great intellecta.”

“Sketches in the Free and Slave States of America” by Eyre Crowe (September 27, 1856) Chapter IV; an excerpt from With Thackeray in America by Eyre Crowe (1893)