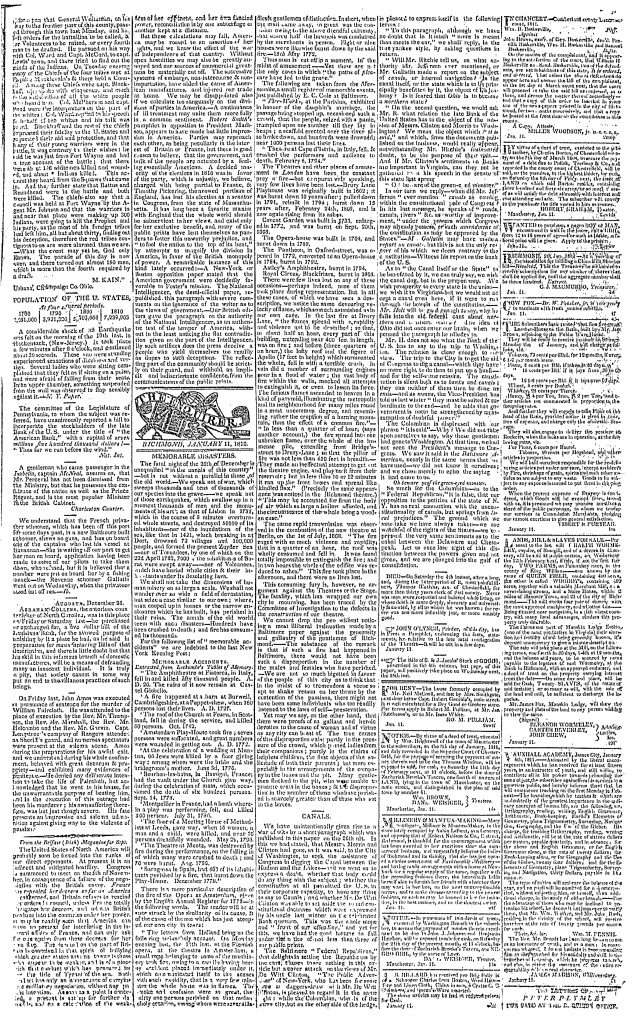 The fatal night of the 26th of December is unequalled “in the annals of the country”—but is not without a parallel in those of the old world.—We speak not of war, which sweeps thousands and tens of thousands of our species into the grave—we speak not of those earthquakes, which swallow up in a moment thousands of men and the monuments of his art; as that of Lisbon in 1755, which in the course of 8 minutes overturned whole streets, and destroyed 50000 of its inhabitants—nor of the inundations of the sea, like that in 1421, which breaking in at Dort, drowned 72 villages and 100,000 people, and formed the present Zuyder Sea—nor of Tornadoes, by one of which on the 22d April 1782, 7000 of the inhabitants of Surat were swept away—nor of Volcanoes, which have buried whole cities & their inhabitants under its desolating lava.

We shall take the dimensions of human misery on so large a scale. We shall not wander over so wide a field of devastation, but seize a case similar to our own; where, man cooped up in houses or the narrow enclosures which he has built, has perished in their ruins. The annals of the old world teem with such disasters—Hundreds have been crushed to death; and fire has consumed its thousands.

For the following list of “memorable accidents” we are indebted to the last New York Evening Post:

Extracted from Luckombe’s Tablet of Memory.

“The Amphitheatre at Fiatorca, in Italy, fell in and killed fifty thousand people. A. D. 26. The ruins of it now remain at Castel Giobello.

‘The roof of the Church at Fearn, in Scotland, fell in during the service, and killed 60 persons. Oct. 1742.

“Amsterdam Play-House took fire; seven persons were suffocated, and great numbers were wounded in getting out. A. D. 1772.

‘At the celebration of a wedding at Mantua, 66 Jews were killed by a floor giving way: among whom were the bride and the bridegroom’s mother. June 3d, 1776.

‘Bourbon-les-bains, du Bassigni, France, had the vault under the Church give way, during the celebration of mass, which occasioned the death of six hundred person. Sept. 14, 1778.

‘The floor of a Meeting House of Methodists at Leeds, gave way, when 16 women, a man and a child, were killed, and near 30 persons dreadfully wounded. May 29, 1796.

‘The Theatre at Mentz, was destroyed by fire during the performance, on the filling in of which many were crushed to death; and 70 were burnt. Aug. 1796.

‘Saragossa in Spain, had 400 of its habitants perished by a fire, that burnt down the Play-House. December 1778.”

There is a more particular description of the fire of the Opera at Amsterdam, given by the English Annual Register for 1772—in the following words. The reader will be at once struck by the similarity of its cause, & of the cause of the one which has just steeped our own city in tears:

“The letters from Holland bring us the following melancholy account. On Monday evening last, the 11th inst. at the Flemish opera, at the theatre in Amsterdam, a small rope belonging to some of the machinery took fire, owing to a candle having been by accident placed immediately under it, which communicated itself to the scenes with such rapidity that in a very few minutes the whole house was in flames. The smoke and confusion were so great, that thirty one persons perished on that melancholy occasion, among whom were several ladies & gentlemen of distinction. In short, when the mail came away, so great was the confusion owing to the above dreadful calamity, that scarce half the business was conducted by the merchants in person. Eight or nine houses were likewise burnt down by the said fire.—15th May 1772.

Thus man is cut off in a moment, in the midst of amusement—Yet these are not the only cases in which “the pats of pleasure have led to the grave.”

The following are taken from the Mnemonika a small register of memorable events, just published by E. C. Cole at Baltimore.

“Fire-Works, at the Parisian, exhibited in honour of the dauphin’s marriage, the passage being stopped up, occasioned such a crowd, that the people, seized with a panic, trampled upon one another till they lay in heaps; a scaffold erected over the river also broke down, and hundreds were drowned; near 1000 persons lost their lives.

Theatre at Cape d’Istria, in Italy, fell & crushed the performers and audience to death, February 6, 1794.”

The Theatres and other places of amusement in London have been the constant prey of fire—but comparatively speaking, very few lives have been lost.—Drury Lane Playhouse was originally built in 1662; it was burnt down 10 years after; pulled down in 1791, rebuilt in 1794; burnt down 15 years after, February 24th, 1809, and is now again rising from its ashes.

There were few lives lost on any of these occasions—perhaps indeed, none of them took place during representation. But in all these cases, of which we have seen a description, we notice the same devouring velocity of flame, which so much astonished us in our own case. In the last fire at Drury Lane, “the flames spread with a rapidity and violence not to be described; so that, in about half an hour, every part of this building, extending near 400 feet in length, was on fire; and before (three quarters of an hour,) the lofty roof and the figure of Apollo (17 feet in height) which surmounted the whole, fell in with a terrible crash. In vain did a number of surrounding engines pour in a flood of water; the vast body of fire within the walls, mocked all attempts to extinguish it, or even to lessen its force. The furious flames ascended to heaven in a kind of parymid [sic], illuminating the metropolis and its neighbourhood for many miles round in a most uncommon degree, and resembling rather the eruption of a burning mountain, than the effect of a common fire.”—”In less than a quarter of of [sic] hour, (says another account,) the fire spread into one unbroken flame, over the whole of the immense pile, extending from Bridge’s-street to Drury-Lane; so that the pillar of fire was not less than 450 feet in breadth.—They made an ineffectual attempt to get out the theatre engine, and play on it from their reservoir; but in less than 10 or 12 minutes it ran up the front boxes and spread like kindled flax.” (Precisely the same appearance was noticed in the Richmond theatre.) “This may be accounted for from the body of air which so large a hollow afforded, and the circumstance of the whole being a wooden case.”

The same rapid transmission was observed in the combustion of the new theatre at Berlin, on the 1st of July, 1808. “The fire raged with so much violence and rapidity, that in a quarter of an hour, the roof was wholly consumed and fell in. It was found totally impossible to extinguish the fire; and in two hours the whole of the edifice was reduced to ashes.” This fire took place in the afternoon, and there were no lives lost.

This consuming fury is, however, no argument against the Theatres or the Stage. The fatality, which has wrapped our own city in mourning, has been traced by the Committee of Investigation to the defects in the construction of our theatre.

We cannot drop the pen without noticing a most illiberal insinuation made by a Baltimore paper against the generosity and gallantry of the gentlemen of Richmond.—The substance of the remark is that if such a fire had happened in Baltimore, there would not have been such a disproportion in the number of the males and females who have perished.—We are not so much bigotted in favour of the people of this city as to think that in the midst of so tremendous a scene so apt to shake reason on her throne by the contention of the passions, there might not have been some individuals who too readily listened to the laws of self-pres[e]rvation.

Yet may we say, on the other hand, that there were proofs of as gallant and heroic devotion to the cause of woman and of virtue as any city can boast of. The true causes of this disproportion exist partly in the pressure of the crowd, which parted ladies from their companions; partly in the claims of helpless children, the first objects of the solicitude of both their parents; but more especially in the arrangements of the company in the boxes and the pit. Many gentlemen flocked to the pit, who were unable to procure seats in the boxes; & the disproportion in the number of those who have perished is scarcely greater than of those who sat in the boxes.