Skip to content
Author: Walter RaleighTranscription Source: The Works of Sir Walter Ralegh, Kt. Now First Collected. To Which Are Prefixed the Lives of the Author by Oldys and Birch. In Eight Volumes (Oxford: Oxford University Press, 1829), 2:i–iii.
FULL TEXT
— page i — 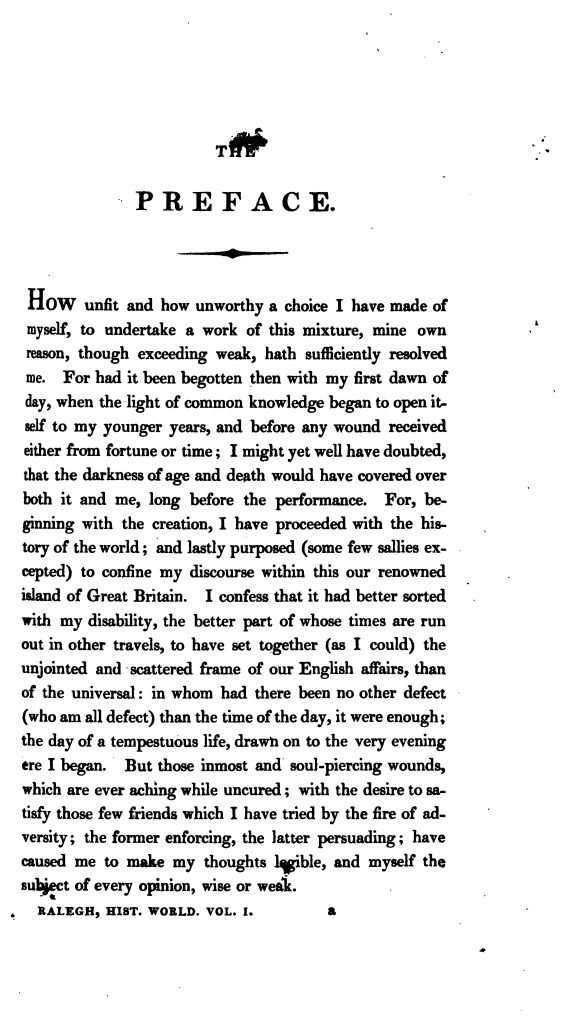 The Works of Sir Walter Ralegh, Volume 2, Page i

How unfit and how unworthy a choice I have made of myself, to undertake a work of this mixture, mine own reason, though exceeding weak, hath sufficiently resolved me. For had it been begotten then with my first dawn of day, when the light of common knowledge began to open itself to my younger years, and before any wound received either from fortune or time; I might yet well have doubted, that the darkness of age and death would have covered over both it and me, long before the performance. For, beginning with the creation, I have proceeded with the history of the world; and lastly purposed (some few sallies excepted) to confine my discourse within this our renowned island of Great Britain. I confess that it had better sorted with my disability, the better part of whose times are run out in other travels, to have set together (as I could) the unjointed and scattered frame of our English affairs, than of the universal: in whom had there been no other defect (who am all defect) than the time of the day, it were enough; the day of a tempestuous life, drawn on to the very evening ere I began. But those inmost and soul-piercing wounds, which are ever aching while uncured; with the desire to satisfy those few friends which I have tried by the fire of adversity; the former enforcing, the latter persuading; have caused me to make my thoughts legible, and myself the subject of every opinion, wise or weak. 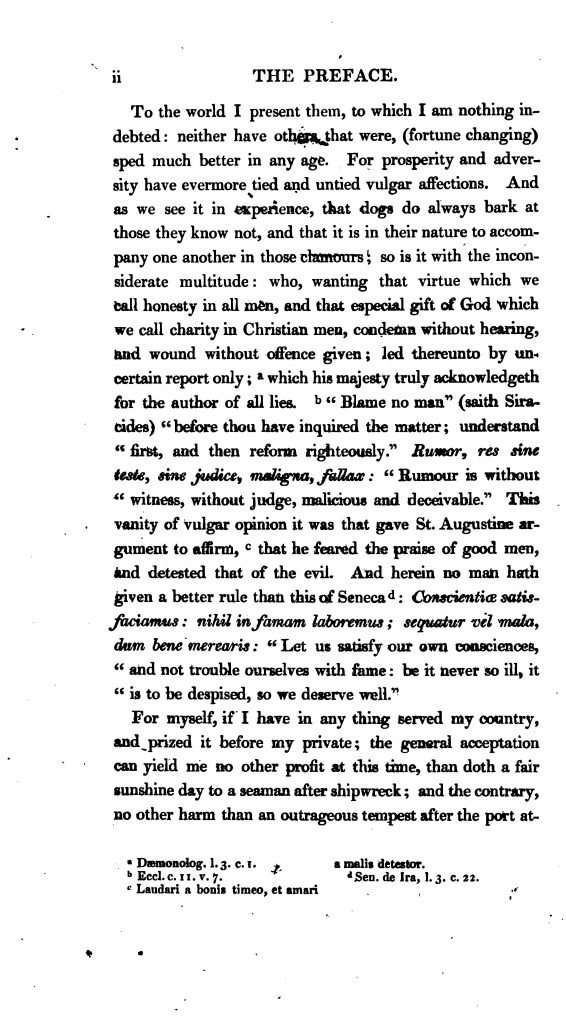 To the world I present them, to which I am nothing indebted: neither have others that were, (fortune changing) sped much better in any age. For prosperity and adversity have evermore tied and untied vulgar affections. And as we see it in experience, that dogs do always bark at those they know not, and that it is in their nature to accompany one another in those clamours; so is it with the inconsiderate multitude: who, wanting that virtue which we call honesty in all men, and that especial gift of God which we call charity in Christian men, condemn without hearing, and wound without offence given; led thereunto by uncertain report only; which his majesty truly acknowledgeth for the author of all lies. “Blame no man” (saith Siracides) “before thou have inquired the matter; understand first, and then reform righteously.” Rumor, res sine teste, sine judice, maligna, fallax: “Rumour is withouth witness, without judge, malicious and deceivable.” This vanity of vulgar opinion it was that gave St. Augustine argument to affirm, that he feared the praise of good men, and detested that of the evil. And herein no man hath given a better rule than this of Seneca: Conscientiœ satisfaciamus: nihil in famam laboremus; sequatur vel mala, dum bene merearis: “Let us satisfy our own consciences, and not trouble ourselves with fame: be it never so ill, it is to be despised, so we deserve well.”

For myself, if I have in any thing served my country, and prized it before my private; the general acceptation can yield me no other profit at this time, than doth a fair sunshine day to a seaman after shipwreck; and the contrary, no other harm than an outrageous tempest after the port at- 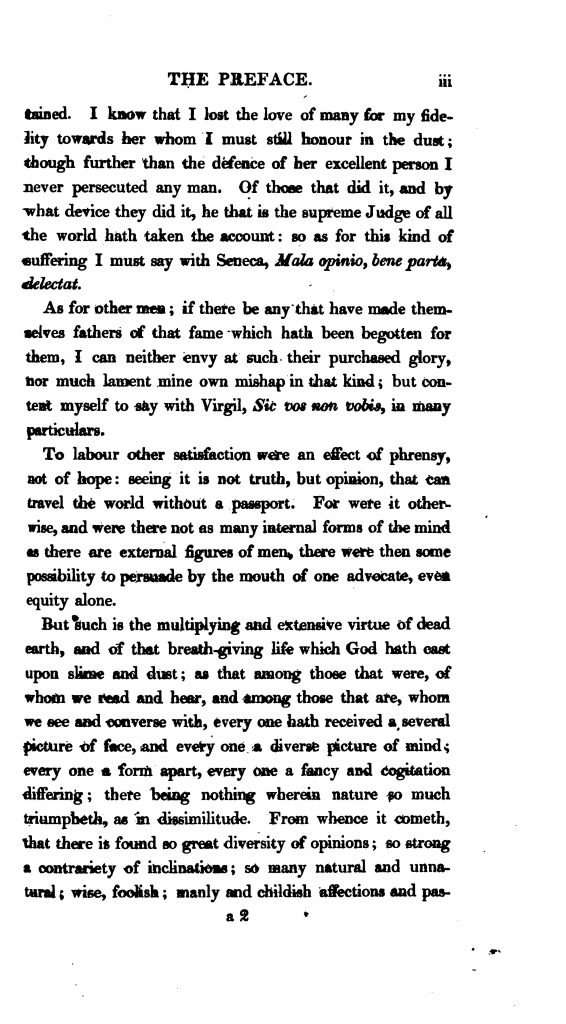 tained. I know that I lost the love of many for my fidelity towards her whom I must still honour in the dust; though further than the defence of her excellent person I never persecuted any man. Of those that did it, and by what device they did it, he that is the supreme Judge of all the worth hath taken the account: so as for this kind of suffering I must say with Seneca, Mala opinion, bene parta, delectat.