Skip to content
Author: William Evelyn CameronTranscription Source: Journal of the House of Delegates of the State of Virginia for the Session of 1883-4 (Richmond: R. F. Walker, 1884), 20–21.
FULL TEXT 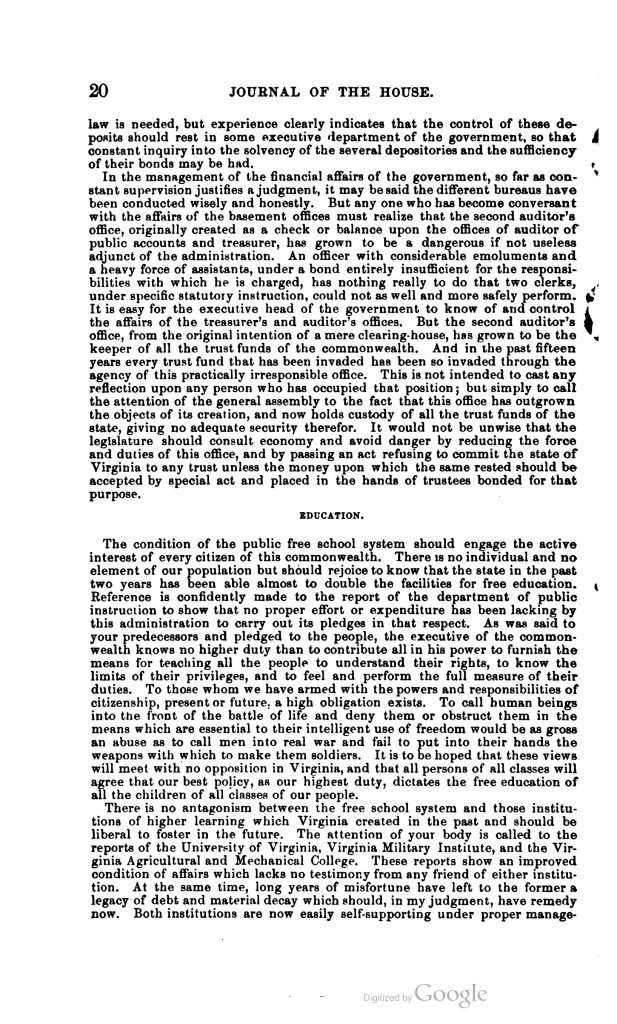 Journal of the House of Delegates of the State of Virginia (1884), Page 20

The condition of the public free school system should engage the active interest of every citizen of this commonwealth. There is no individual and no element of our population but should rejoice to know that the state in the past two years has been able almost to double the facilities for free education. Reference is confidently made to the report of the department of public instruction to show that no proper effort or expenditure has been lacking by this administration to carry out its pledges in that respect. As was said to your predecessors and pledged to the people, the executive of the commonwealth knows no higher duty than to contribute all in his power to furnished the means for teaching all the people to understand their rights, to know the limits of their privileges, and to feel and perform the full measure of their duties. To whose whom we have armed with the powers and responsibilities of citizenship, present or future, a high obligation exists. To call human beings into the front of the battle of life and deny them or obstruct them in the means which are essential to their intelligent use of freedom would be as gross an abuse as to call men into real war and fail to put into their hands the weapons with which to make them soldiers. It is to be hoped that these views will meet with no opposition in Virginia, and that all persons of all classes will agree that our best policy, as our highest duty, dictates the free education of all the children of all classes of our people.

There is no antagonism between the free school system and those institutions of higher learning which Virginia created in the past and should be liberal to foster in the future. The attention of your body is called to the reports of the University of Virginia, Virginia Military Institute, and the Virginia Agricultural and Mechanical College. These reports show an improved condition of affairs which lacks no testimony from any friend of either institution. At the same time, long years of misfortune have left to the former a legacy of debt and material decay which should, in my judgment, have remedy now. Both institutions are now easily self-supporting under proper manage- 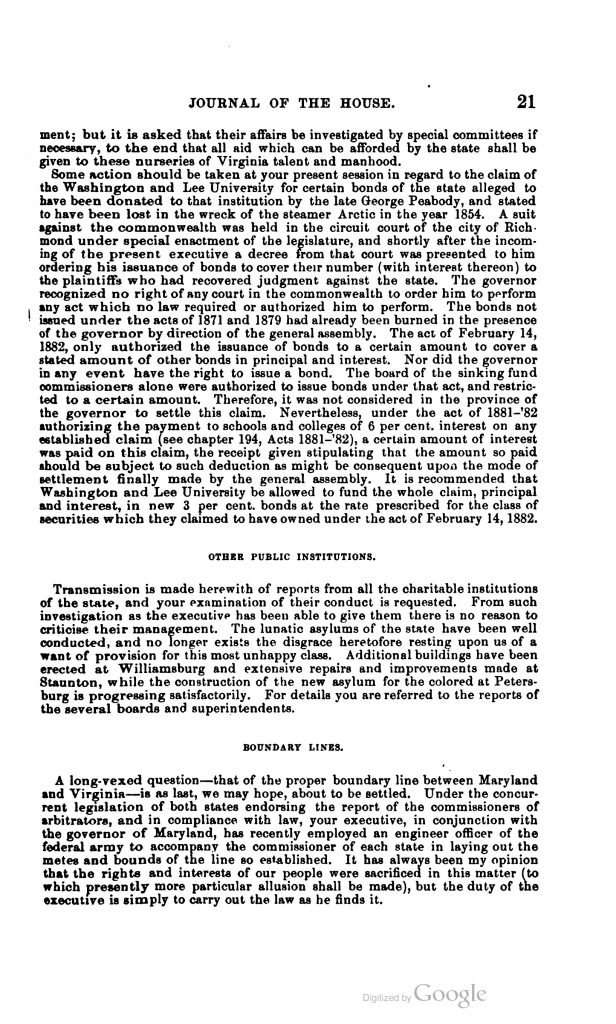 ment; but it is asked that their affairs be investigated by special committees if necessary, to the end that all aid which can be afforded by the state shall be given to these nurseries of Virginia talent and manhood.

Some action should be taken at your present session in regard to the claim of the Washington and Lee University for certain bonds of the state alleged to have been donated to that institution by the late George Peabody, and stated to have been lost in the wreck of the steamer Arctic in the year 1854. A suit against the commonwealth was held in the circuit court of the city of Richmond under special enactment of the legislature, and shortly after the incoming of the present executive a decree from the court was presented to him ordering his issuance of bonds to cover their number (with interest thereon) to the plaintiffs who had recovered judgment against the state. The governor recognized no right of any court in the commonwealth to order him to perform any act which no law required or authorized him to perform. The bonds not issued under the acts of 1871 and 1879 had already been burned in the presence of the governor by direction of the general assembly. The act of February 14, 1882, only authorized the issuance of bonds to a certain amount to cover a stated amount of other bonds in principal and interest. Nor did the governor in any event have the right to issue a bond. The board of the sinking fund commissioners alone were authorized to issue bonds under that act, and restricted to a certain amount. Therefore, it was not considered in the province of the governor to settle this claim. Nevertheless, under the act of 1881–’82 authorizing the payment to schools and colleges of 6 per cent. interest on any established claim (see chapter 194, Acts 1881–’82), a certain amount of interest was paid on this claim, the receipt given stipulating that the amount so paid should be subject to such deduction as might be consequent upon the mode of settlement finally made by the general assembly. It is recommended that Washington and Lee University be allowed to fund the whole claim, principal and interest, in new 3 per cent. bonds at the rate prescribed for the class of securities which they claimed to have been owned under the act of February 14, 1882.