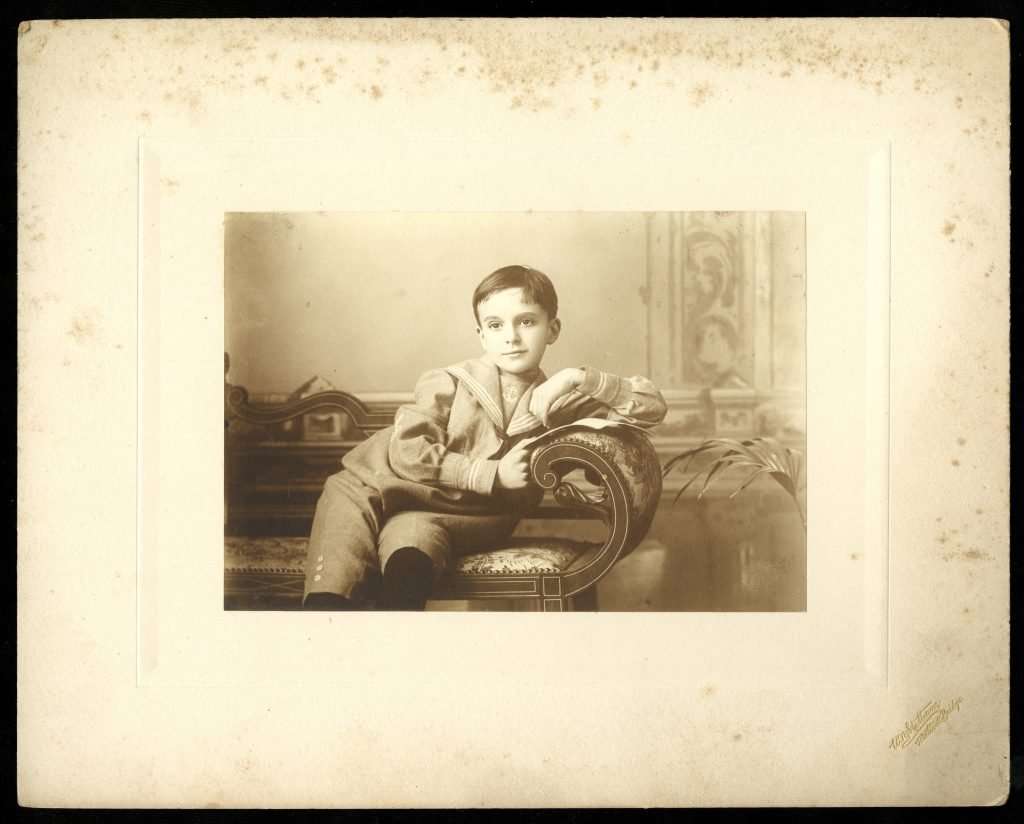 Dos Passos as a Child

John Roderigo Madison was born on January 14, 1896, in a Chicago, Illinois, hotel room, the illegitimate son of John Randolph Dos Passos Jr., a lawyer and son of a Portuguese immigrant, and Lucy Addison Sprigg Madison of Petersburg, Virginia. He was raised largely by his mother in Brussels, Belgium, and London, England, unable to take his father’s name until his parents married in 1910. In 1907 he enrolled in the Choate Preparatory School in Wallingford, Connecticut, where he earned enough credits to graduate by the age of fifteen. After a yearlong tour of Europe in the company of a tutor, he entered Harvard University in 1912. There he became friends with the future experimental poet E. E. Cummings and began to publish poetry and criticism of his own.

Following his graduation from Harvard in 1916, Dos Passos divided a year between Spain and New York City, absorbing both the traditional Spanish artistic culture and the radicalism of New York intellectuals like Emma Goldman. The killing fields of World War I had not intruded on his studies at Harvard, where his immersion in a Victorian sensibility, he wrote later, “seemed more important, somehow, than the massacres round Verdun.” On July 3, 1917, however, he and his friends Cummings and Robert Hillyer joined the Norton-Harjes Ambulance Corps in Paris, France, looking for adventure. (The service was absorbed into the United States Medical Corps on August 28, and Dos Passos agreed to stay on.) The work took Dos Passos, among other places, to the trenches of Verdun, where he witnessed what he called at the time the “rollicking, grotesque dance of death,” a place where those old Victorian values were proved “putrid and false.”

Writing from the Left

Dos Passos’s first two novels, the inconsequential One Man’s Initiation: 1917 (1920) and the much better Three Soldiers (1921), are both direct responses to his experiences in Europe. Plugged full of antiestablishment rhetoric and paeans to individualism, they were also initial attempts at modernism. Three Soldiers, especially, was interested in varying points of view and the imagery of music and painting. (One of the three soldiers is John Andrews, a Virginian who studies music at Harvard.) Dos Passos’s later, more famous work, was likewise evidence of a writer who had firsthand access to the avant-garde thinkers of his day: from visual artists like Fernand Leger to writers like T. S. Eliot and James Joyce to Russian composers like Igor Stravinsky and Sergei Prokofiev. The noisy clamor of New York City was another influence, and Manhattan Transfer (1925) is both a representation of that chaotic environment and an indictment of commercialized urban life. 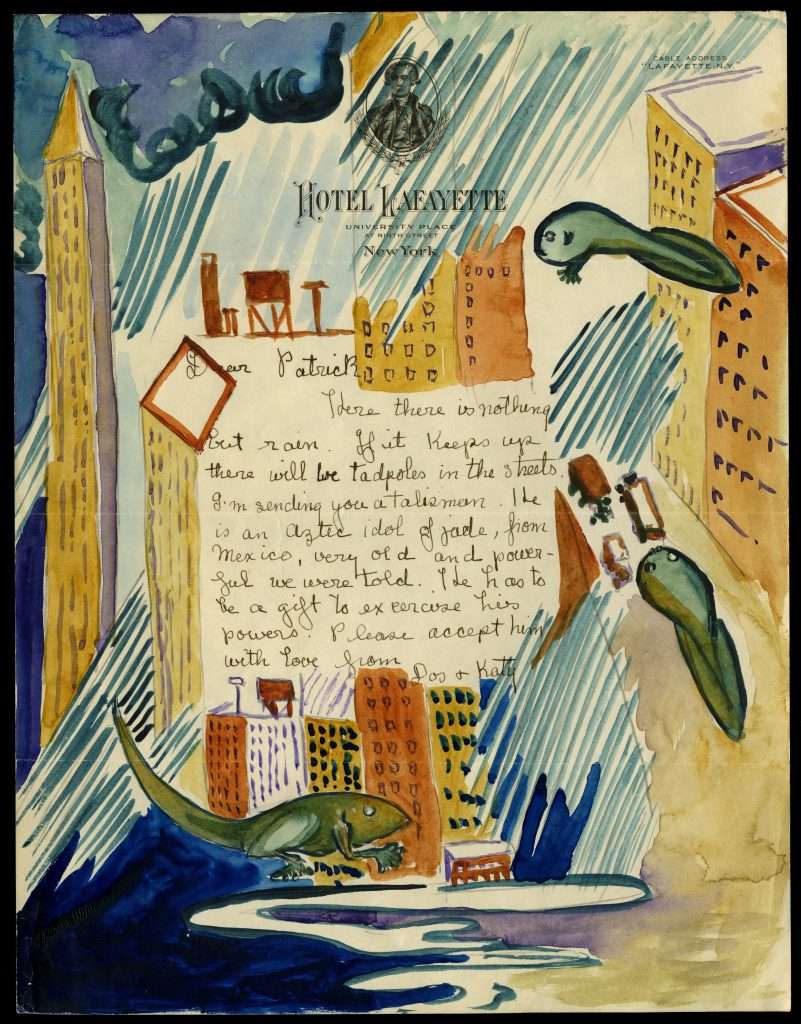 By the time the first novel in his so-called U.S.A. trilogy, The 42nd Parallel, was published in 1930, Dos Passos had adopted a dim view of capitalism and sympathy for workers’ movements and socialism. He was particularly enraged by the 1927 executions, in Massachusetts, of the Italian-born laborers and anarchists Nicola Sacco and Bartolomeo Vanzetti. The trilogy uses an experimental cut-up technique—weaving together various elements, including newsreel headlines, fiction, biography, and autobiography—to present a fast-paced portrait of what Dos Passos saw as a society in decline. Initially, it received mixed critical reaction, with some readers warming to its frenetic style and others treating it with skepticism. Over time, the trilogy, which also includes 1919 (1932) and Big Money (1936), has been acknowledged as a major accomplishment and a notable influence on writers who followed. In 1938, philosopher Jean-Paul Sartre declared Dos Passos “the greatest living writer of our time.”

Yet Dos Passos’s visit to Russia ten years earlier had marked the beginning of a gradual shift in his thinking. Unconvinced that communism was truly improving the lives of Russian people, he began to suspect that, internationally, the Communist Party was concerned primarily with consolidating its own power. The final blow for him came in 1937, during the Spanish Civil War (1936–1939), when a friend of Dos Passos, José Robles, was executed by the Spanish Communist Party. The affair ended Dos Passos’s long friendship with the writer Ernest Hemingway, and from then on, Dos Passos used his reputation and writing as a platform for attacking fascism and communism. 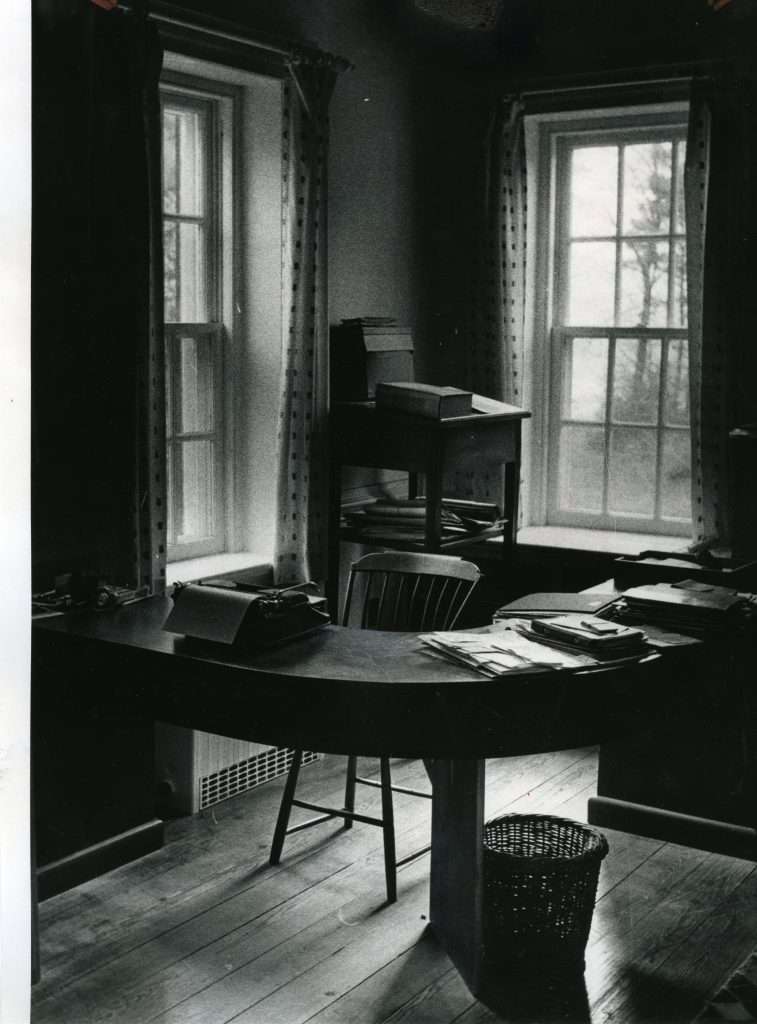 The Study of John Dos Passos

Dos Passos’s first wife, Katharine Smith (whom he had married in 1929), was killed in an automobile accident in 1947. Dos Passos lost sight in one eye because of the accident. In 1949, after a long legal battle, he was able to establish claim to his father’s farm at Spence’s Point in Westmoreland County and he moved there from Baltimore, Maryland, with his new wife, Elizabeth Hamlin Holdridge. The two had a daughter, Lucy Hamlin Dos Passos, in 1950. A reporter who tracked Dos Passos down in Virginia wrote, “The idea of a so-called leftist novelist coming to live in ultra-Virginia Westmoreland County might seem surprising, but in the house at Spence’s Point and in the gray fields which stretch away from it, the author … seems as authentic a part of the landscape as the cedars that line the fields.” Ironically, it was just at this time that Dos Passos’s politics were taking a turn to the right. He loathed bureaucratic encroachment on liberty and supported the conservative Democrat Harry F. Byrd. He studied and chronicled the meaning of liberty as espoused by America’s founding fathers, and especially Thomas Jefferson, whose philosophy he admired. Dos Passos’s work—by wide critical consensus—became flat and didactic, however.

Nonetheless, Dos Passos is remembered as a significant writer on the strength of his earlier novels. He was elected to the American Academy of Art and Letters in 1947 and received the Antonio Feltrinelli Prize for his body of work in 1967. Since 1980, Longwood University in Farmville has awarded an annual Dos Passos Prize for Literature to writers who display an interest in American themes and an experimental approach to form. He also nurtured a strong interest in painting throughout his life, producing more than four hundred works of art and earning respect if not great fame as an artist.

Dos Passos died on September 28, 1970, in Baltimore, Maryland, and was buried in Westmoreland County. The Alderman Library at the University of Virginia in Charlottesville has the largest collection of his papers.