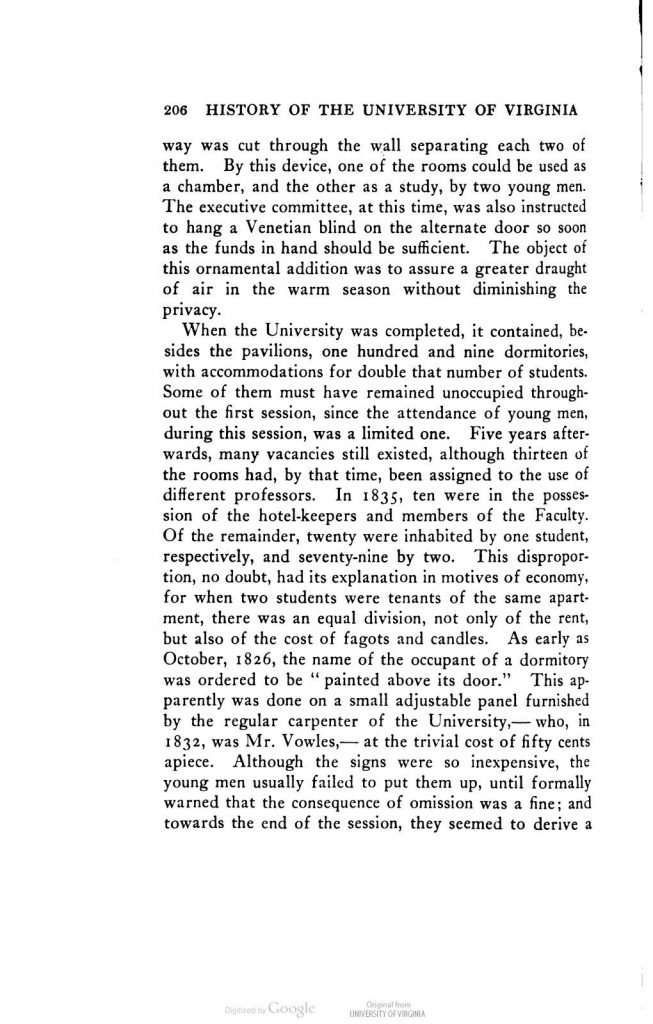 When the University was completed, it contained, besides the pavilions, one hundred and nine dormitories, with accommodations for double that number of students. Some of them must have remained unoccupied throughout the first session, since the attendance of young men, during this session, was a limited one. Five years afterwards, many vacancies still existed, although thirteen of the rooms had, by that time, been assigned to the use of different professors. In 1835, ten were in the possession of the hotel-keepers and members of the Faculty. Of the remainder, twenty were inhabited by one student, respectively, and seventy-nine by two. This disproportion, no doubt, had its explanation in motives of economy, for when two students were tenants of the same apartment, there was an equal division, not only of the rent, but also of the cost of fagots and candles. As early as October, 1826, the name of the occupant of a dormitory was ordered to be “painted above its door.” This apparently was done on a small adjustable panel furnished by the regular carpenter of the University,—who, in 1832, was Mr. Vowles,—at the trivial cost of fifty cents apiece. Although the signs were so inexpensive, the young men usually failed to put them up, until formally warned that the consequence of omission was a fine; and towards the end of the session, they seemed to derive a 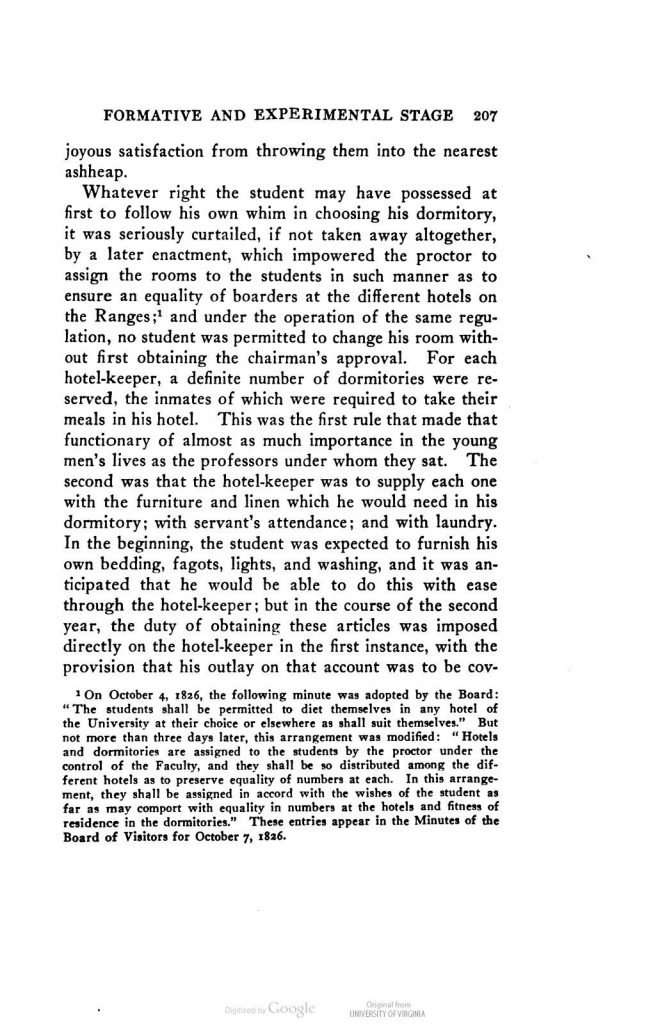 joyous satisfaction from throwing them into the nearest ashheap.

Whatever right the student may have possessed at first to follow his own whim in choosing his dormitory, it was seriously curtailed, if not taken away altogether, by a later enactment, which impowered the proctor to assign the rooms to the students in such manner as to ensure an equality of boarders at the different hotels on the Ranges;1 and under the operation of the same regulation, no student was permitted to change his room without first obtaining the chairman’s approval. For each hotel-keeper, a definite number of dormitories were reserved, the inmates of which were required to take their meals in his hotel. This was the first rule that made that functionary of almost as much importance in the young men’s lives as the professors under whom they sat. The second was that the hotel-keeper was to supply each one with the furniture and linen which he would need in his dormitory; with servant’s attendance; and with laundry. In the beginning, the student was expected to furnish his own bedding, fagots, lights, and washing, and it was anticipated that he would be able to do this with ease through the hotel-keeper; but in the course of the second the year, the duty of obtaining these articles was imposed directly on the hotel-keeper in the first instance, with the provision that his outlay on that accounted was to be cov-

1 On October 4, 1826, the following minute was adopted by the Board: “The students shall be permitted to diet themselves in any hotel of the University at their choice or elsewhere as shall suit themselves.” But not more than three days later, this arrangement was modified: “Hotels and dormitories are assigned to the students by the proctor under the control of the Faculty, and they shall be so distributed among the different hotels as to preserve equality of numbers at each. In this arrangement, they shall be assigned in accord with the wishes of the student as far as may comport with equality in numbers at the hotels and fitness of residence in the dormitories.” These entries appear in the Minutes of the Board of Visitors for October 7, 1826. 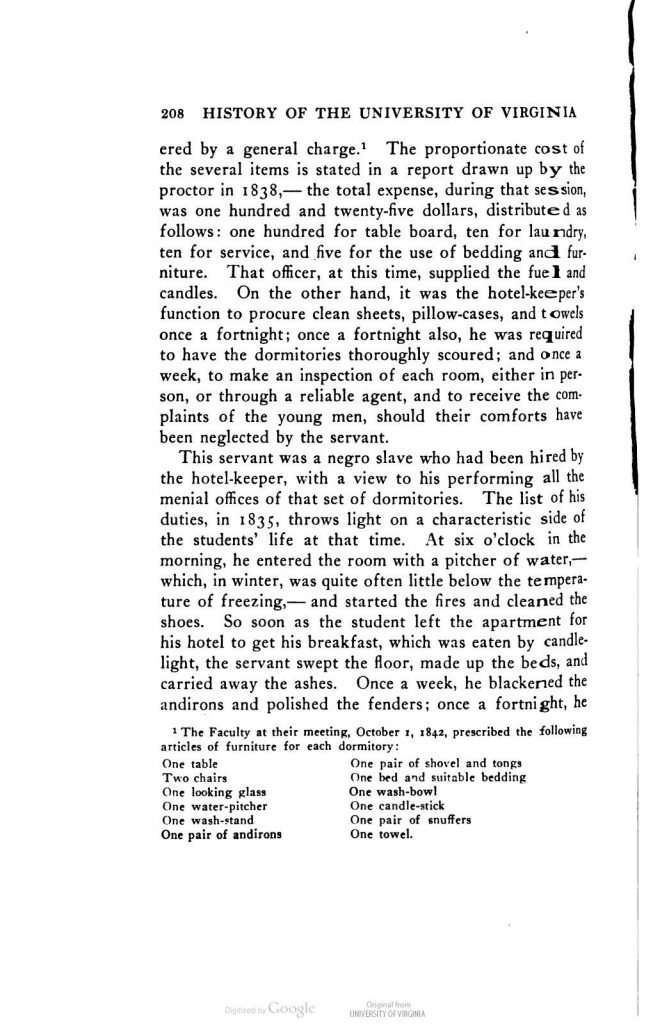 ered by a general charge.1 The proportionate cost of the several items is stated in a report drawn up by the proctor in 1838,—the total expense, during that session, was one hundred and twenty-five dollars, distributed as follows: one hundred for table board, ten for laundry, ten for service, and five for the use of bedding and furniture. That officer, at this time, supplied the fuel and candles. On the other hand, it was the hotel-keeper’s function to procure clean sheets, pillow-cases, and towels once a fortnight; once a fortnight also, he was required to have the dormitories thoroughly scoured; and once a week, to make an inspection of each room, either in person, or through a reliable agent, and to receive the complaints of the young men, should their comforts have been neglected by the servant.

This servant was a negro slave who had been hired by the hotel-keeper, with a view to his performing all the menial offices of that set of dormitories. The list of his duties, in 1835, throws light on a characteristic side of the students’ life at that time. At six o’clock in the morning, he entered the room with a pitcher of water,—which, in winter, was quite often little below the temperature of freezing,—and started fires and cleaned the shoes. So soon as the student left the apartment for his hotel to get his breakfast, which was eaten by candlelight, the servant swept the floor, made up the beds, and carried away the ashes. Once a week, he blackened the andirons and polished the fenders; once a fortnight, he

1 The Faculty at their meeting, October 1, 1842, prescribed the following articles of furniture for each dormitory:

One table
Two chairs
One looking glass
One water-pitcher
One wash-stand
One pair of andirons
One pair of shovel and tongs
One bed and suitable bedding
One wash-bowl
One candle-stick
One pair of snuffers
One towel. 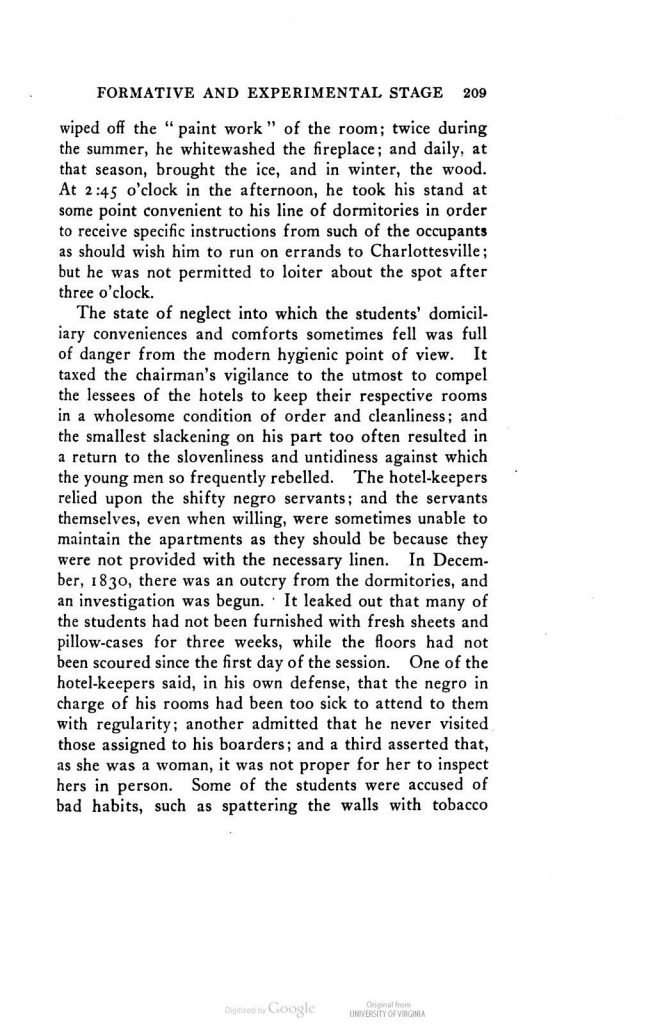 wiped off the “paint work” of the room; twice during the summer, he whitewashed the fireplace; and daily, at that season, he brought the ice, and in winter, the wood. At 2:45 o’clock in the afternoon, he took his stand at some point convenient to his line of dormitories in order to receive specific instructions from such of the occupants as should wish him to run on errands to Charlottesville; but he was not permitted to loiter about the spot after three o’clock.

The state of neglect into which the students’ domiciliary conveniences and comforts sometimes fell was full of danger from the modern hygienic point of view. It taxed the chairman’s vigilance to the utmost to compel the lessees of the hotels to keep their respective rooms in a wholesome condition of order and cleanliness; and the smallest slackening on his part too often resulted in a return to the slovenliness and untidiness against which the young men so frequently rebelled. The hotel-keepers relied upon the shifty negro servants; and the servants themselves, even when willing, were sometimes unable to maintain the apartments as they should be because they were not provided with the necessary linen. In December, 1830, there was an outcry from the dormitories, and an investigation was begun. It leaked out that many of the students had not been furnished with fresh sheets and pillow-cases for three weeks, while the floors had not been scoured since the first day of the session. One of the hotel-keepers said, in his own defense, that the negro in charge of his rooms had been too sick to attend to them with regularity; another admitted that he never visited those assigned to his boarders; and a third asserted that, as she was a woman, it was not proper for her to inspect hers in person. Some of the students were accused of bad habits, such as spattering the walls with tobacco 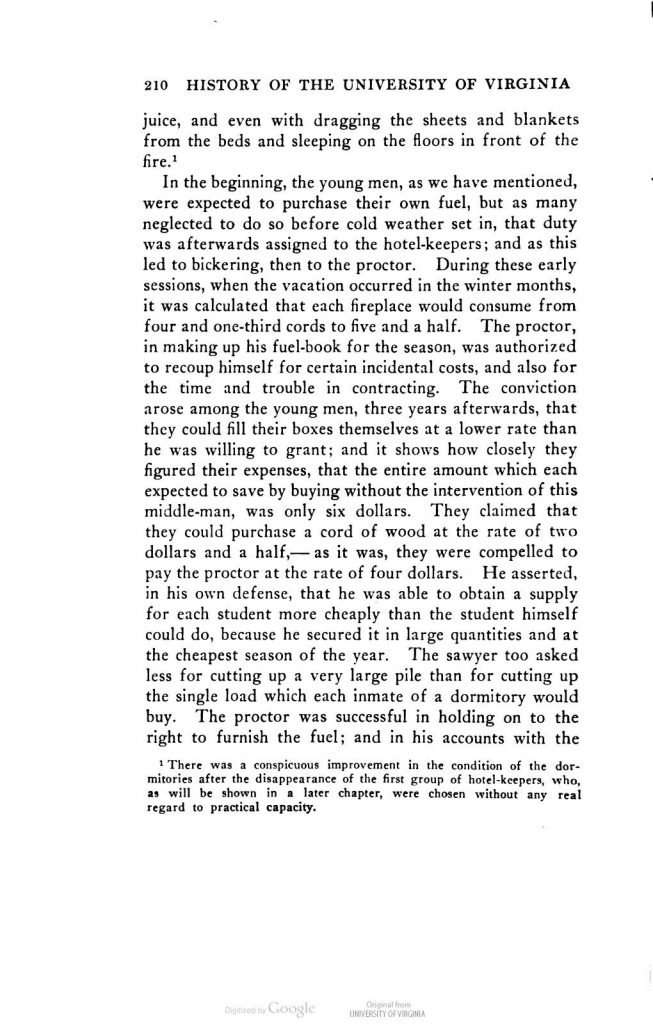 juice, and even with dragging the sheets and blankets from the beds and sleeping on the floors in front of the fire.1

1 There was a conspicuous improvement in the condition of the dormitories after the disappearance of the first group of hotel-keepers, who, as will be shown in a later chapter, were chosen without any real regard to practical capacity. 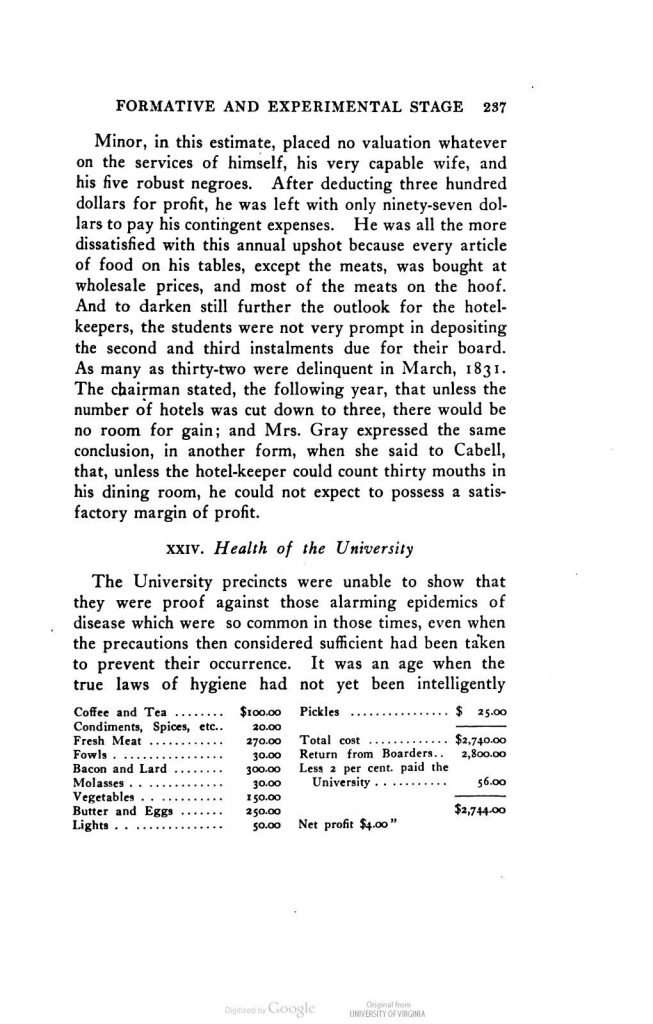 The University precincts were unable to show that they were proof against those alarming epidemics of disease which were so common in those times, even when the precautions then considered sufficient had been taken to prevent their occurrence. It was an age when the true laws of hygiene had not yet been intelligently 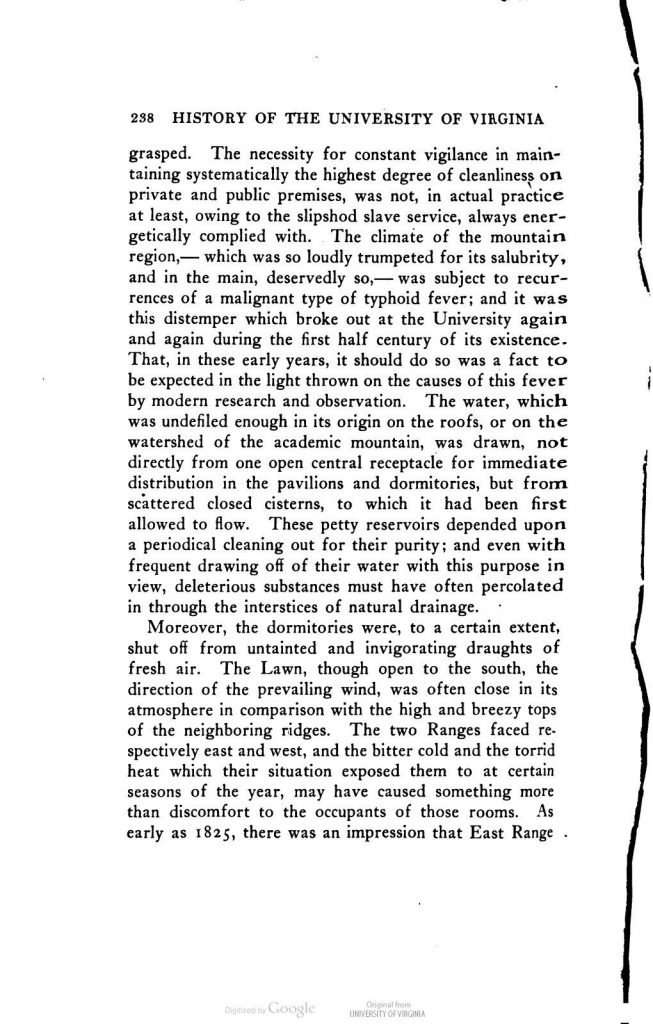 grasped. The necessity for constant vigilance in maintaining systematically the highest degree of cleanliness on private and public premises, was not, in actual practice at least, owing to the slipshod slave service, always energetically complied with. The climate of the mountain region,—which was so loudly trumpeted for its salubrity, and in the main, deservedly so,—was subject to recurrences of a malignant type of typhoid fever; and it was this distemper which broke out at the University again and again during the first half century of its existence. That, in these early years, it should do so was a fact to be expected in the light thrown on the causes of this fever by modern research and observation. The water, which was undefiled enough in its origin on the roofs, or on the watershed of the academic mountain, was drawn, not directly from one open central receptacle for immediate distribution in the pavilions and dormitories, but from scattered closed cisterns, to which it had been first allowed to flow. These petty reservoirs depended upon a periodical cleaning out for their purity; and even with frequent drawing off of their water with this purpose in view, deleterious substances must have often percolated in through the interstices of natural drainage.

Moreover, the dormitories were, to a certain extent, shut off from untainted and invigorating draughts of fresh air. The Lawn, though open to the south, the direction of the prevailing wind, was often close in its atmosphere in comparison with the high and breezy tops of the neighboring ridges. The two Ranges faced respectively east and west, and the bitter cold and the torrid heat which their situation exposed them to at certain seasons of the year, may have caused something more than discomfort to the occupants of those rooms. As early as 1825, there was an impression that East Range 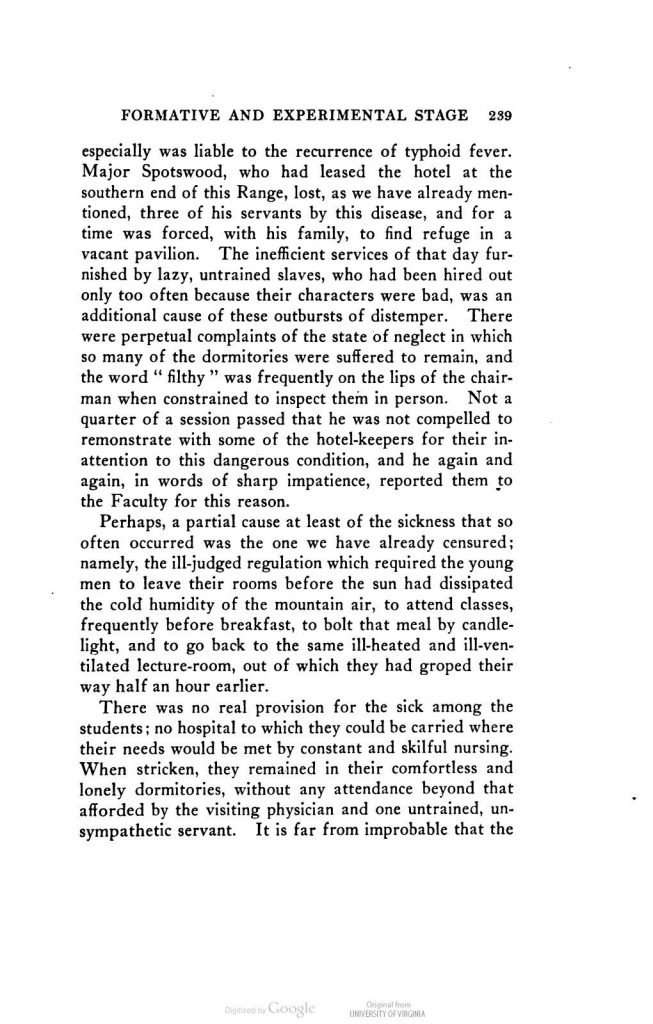 especially was liable to the recurrence of typhoid fever. Major Spotswood, who had leased the hotel at the southern end of this Range, lost, as we have already mentioned, three of his servants by this disease, and for a time was forced, with his family, to find refuge in a vacant pavilion. The inefficient services of that day furnished by lazy, untrained slaves, who had been hired out only too often because their characters were bad, was an additional cause of these outbursts of distemper. There were perpetual complaints of the state of neglect in which so many of the dormitories were suffered to remain, and the word “filthy” was frequently on the lips of the chairman when constrained to inspect them in person. Not a quarter of a session passed that he was not compelled to remonstrate with some of the hotel-keepers for their inattention to this dangerous condition, and he again and again, in words of sharp impatience, reported them to the Faculty for this reason.

Perhaps a partial cause at least of the sickness that so often occurred was the one we have already censured; namely, the ill-judged regulation which required the young men to leave their rooms before the sun had dissipated the cold humidity of the mountain air, to attend classes, frequently before breakfast, to bolt that meal by candlelight, and to go back to the same ill-heated and ill-ventilated lecture-room, out of which they had groped their way half an hour earlier.

RELATED CONTENT
Categories:
Type:
MAP
TIMELINE
1920-1922
History of the University of Virginia, 1819-1919: The Lengthened Shadow of One Man by Philip Alexander Bruce is published in five volumes.
FURTHER READING