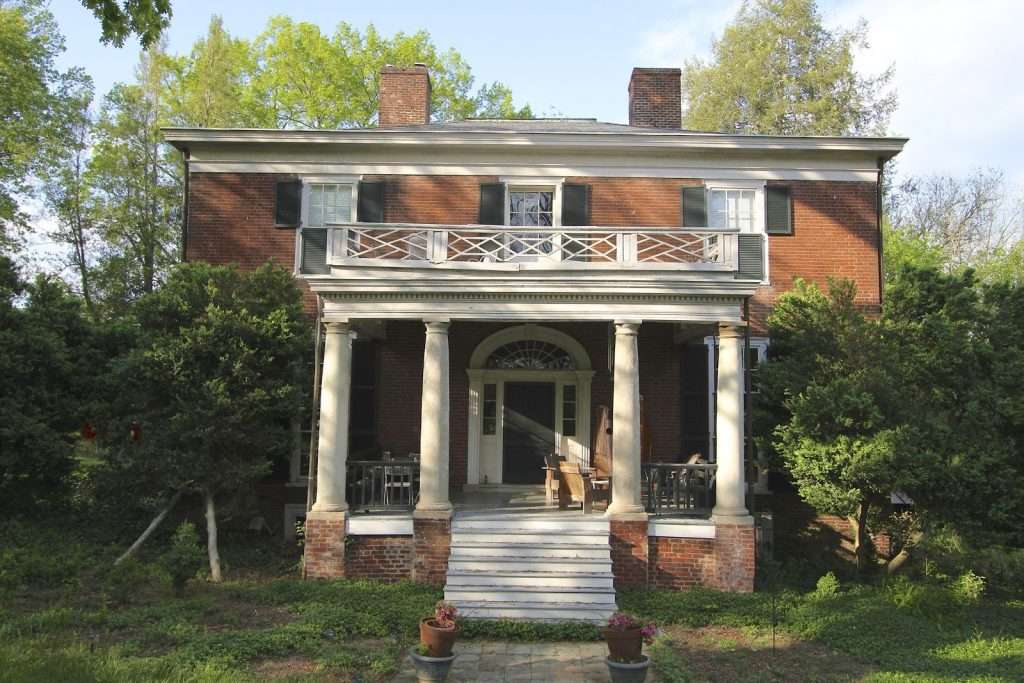 John Anthony Gardner Davis was born on March 5, 1802, in Middlesex County and was the son of Staige Davis, a merchant and farmer, and Elizabeth Macon Gardner Davis. He attended the College of William and Mary during the 1819–1820 term and married Mary Jane Terrell, a grandniece of Thomas Jefferson, in Williamsburg on June 14, 1821. They had five sons (one of whom died in infancy) and three daughters. After being admitted to the bar in 1822, Davis briefly returned to Middlesex County, but by 1824 he had moved his young family to Albemarle County. There he attended the University of Virginia in 1825, established a legal practice, and purchased 148 3/4 acres just east of Charlottesville, on which he constructed a Georgian mansion. He cofounded a newspaper, the Virginia Advocate, in 1827 and helped to publish the first edition of Jefferson’s writings two years later. 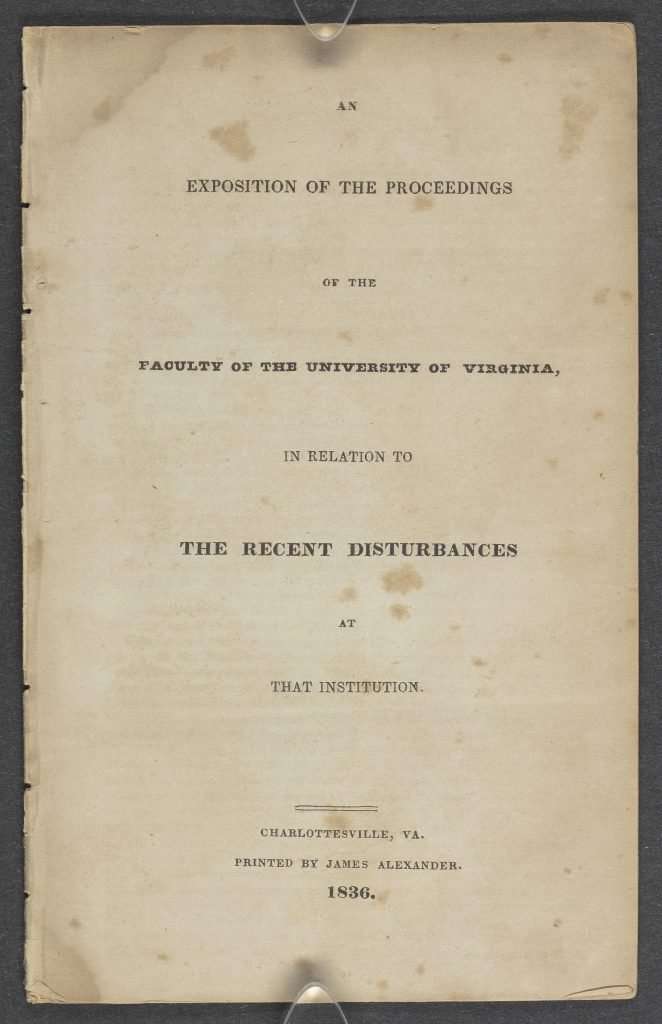 An Exposition of the Proceedings of the Faculty of the University of Virginia, in Relation to the Recent Disturbances at That Institution.

The University of Virginia’s board of visitors appointed Davis secretary to the board in July 1829 and professor of law on July 20, 1830, with an annual salary of $1,000. He was chair of the faculty from 1835 to 1837 and from 1839 to 1840. Davis published a number of works, including A Lecture on the Constitutionality of Protecting Duties (1832) and A Treatise on Criminal Law, with an Exposition of the Office and Authority of Justices of the Peace in Virginia (1838). He believed in strict construction of the Constitution, a limited national government, and the doctrine of states’ rights. He supported South Carolina during the Nullification Crisis in 1832, and he opposed protective tariffs, the supremacy of the federal judiciary, and the Bank of the United States. Although long hostile to organized religion, Davis joined Christ Episcopal Church in Charlottesville about 1835 and was elected a vestryman.

Polite, affable, kindhearted, and fair-minded, Davis was both liked and respected at the university. One of his pupils wrote that he was “generally considered the best professor here.” Davis was also a zealous enforcer of the university’s regulations, many of which the students heartily disliked. In the autumn of 1836 the student militia began drilling on campus without permission and refused to desist, submit to conditions, or disband. On November 11, the university expelled about seventy students, an action that resulted in a riot the following evening. Davis, as chair of the faculty, favored conciliation and allowed students to return to class so long as they affirmed that they had not taken part in the disturbance or were sorry they had done so. 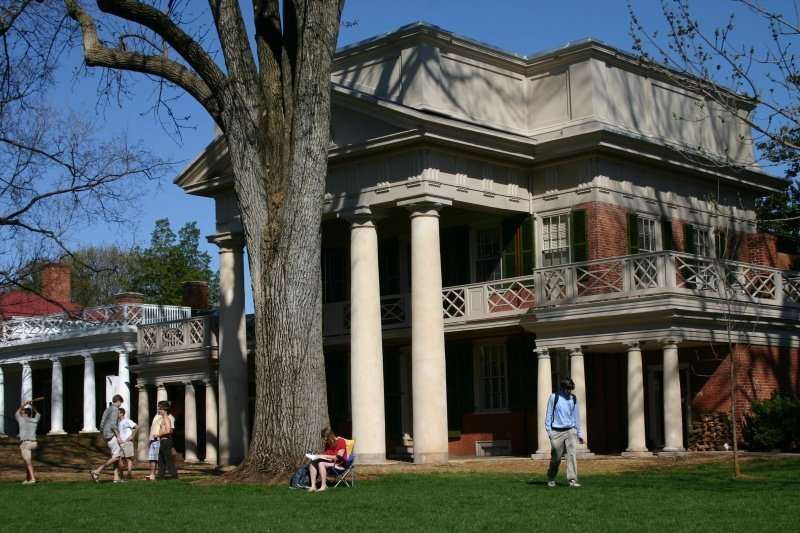 Groups of students commemorated the event in 1837 and 1838 and would have done so again in 1839 except for inclement weather. On the evening of November 12, 1840, two students, William A. Kincaid and Joseph Green Semmes, wearing disguises, discharged their pistols in front of the faculty residences. Warned by other students that Davis was waiting for them outside Pavilion X, his campus home, they continued down the lawn. Semmes reloaded his weapon and swore that he would shoot Davis if he interfered with them. When Davis stepped forward to apprehend the perpetrators, Semmes shot him in the abdomen. After the incident, Davis forgave Semmes and stated that he hoped that no harm would come to him. Davis died two days later, on November 14, 1840, and was buried in the University of Virginia Cemetery. 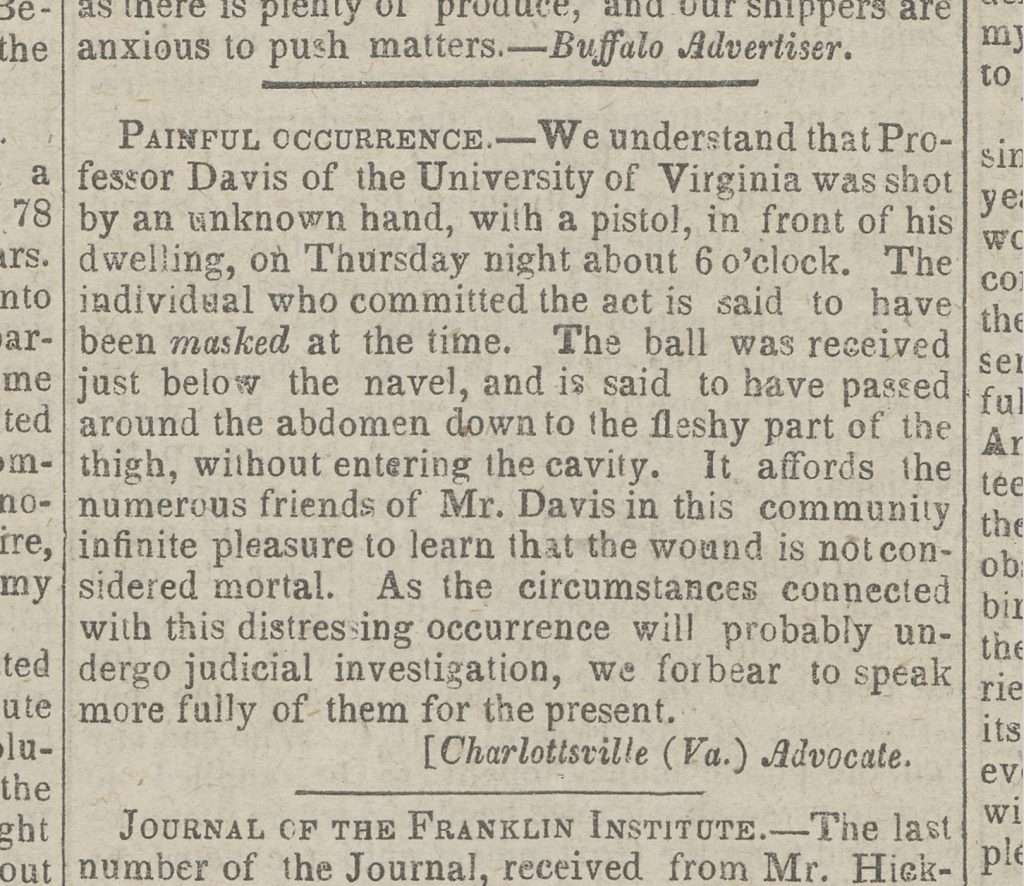 Semmes was arrested but skipped bail and left the state before the trial. Whether out of remorse or for some other reason, in July 1847 he committed suicide at his brother’s home in Georgia. Kincaid was allowed to return to the university to continue his studies. The killing of Davis led to an increased interest in religion and studiousness at the university, encouraged a loosening of the rules governing student behavior, and, within several years, prompted the creation of the university’s honor system.