Joseph Carrington Cabell was born on December 28, 1778, at Liberty Hall plantation in Amherst County, the son of Nicholas Cabell and Hannah Carrington Cabell. He attended Hampden-Sydney College during the 1795–1796 term and the College of William and Mary from 1796 to 1798. At first an indifferent student, Cabell returned to Amherst County and read law with his brother William H. Cabell, later governor of Virginia and judge of the Virginia Court of Appeals. In 1800 Cabell went back to William and Mary for another year to attend law lectures by St. George Tucker and then moved to Richmond to study law. He may have engaged in serious study on his own, because his mentors Thomas Jefferson and Tucker drew up long reading lists for him.

A variety of illnesses that troubled Cabell throughout his life soon forced him to abandon his studies. Convincing his relatives that a foreign sojourn would broaden his education and restore his health, he traveled throughout Europe from 1803 to 1806 and socialized with well-connected Americans in England, France, the Low Countries, and Italy. Cabell’s traveling companion for part of the time was Washington Irving.

Cabell returned to Virginia in 1806 and on January 1, 1807, married Tucker’s stepdaughter Mary Walker Carter in Williamsburg. Later in 1807 Cabell served as a member of the federal grand jury that indicted Aaron Burr for treason. His Jeffersonian Republican sentiments were reflected in his vote to indict the former vice president, but he later acknowledged that the case against Burr was weak.

Politics and the University of Virginia 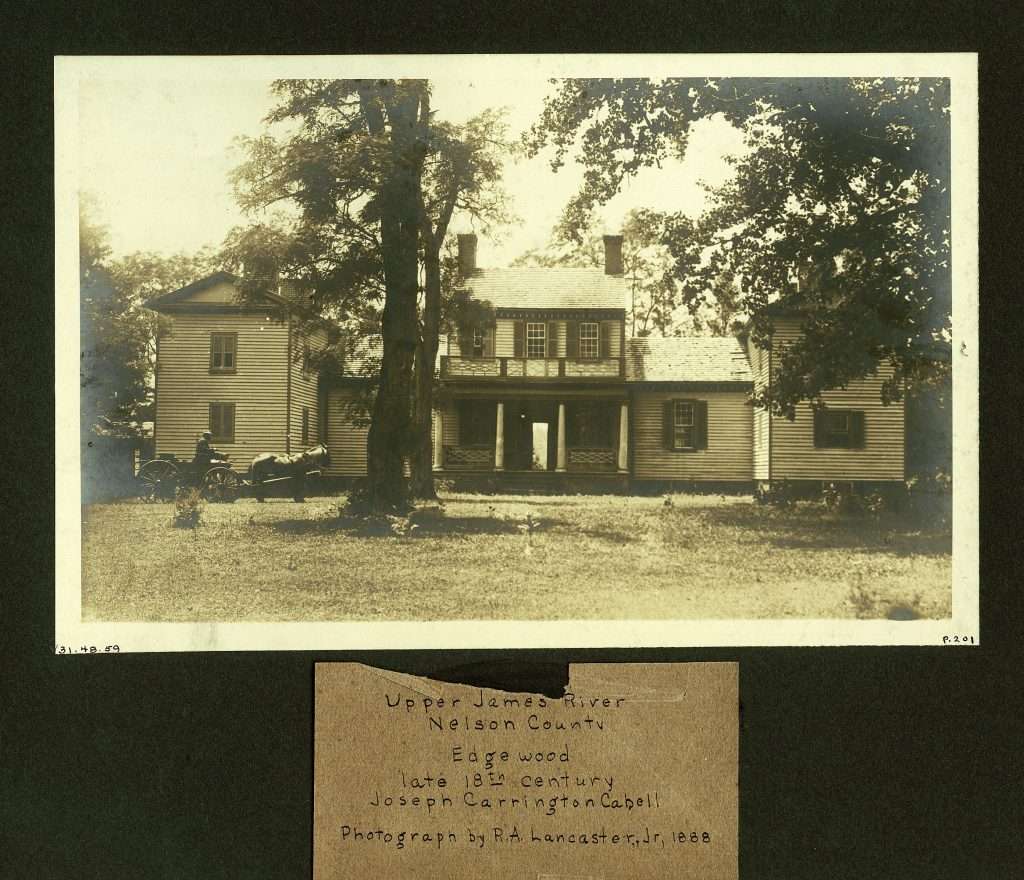 Cabell apparently never practiced law. Instead, his third stay in Williamsburg whetted his appetite for politics, the favorite pastime of Virginia gentlemen. Although he acquired Corotoman, a large estate in Lancaster County, as part of his wife’s inheritance, he moved in 1808 to Edgewood, a plantation he had purchased in Amherst County. Almost immediately Cabell was elected to the House of Delegates from Amherst for the 1808–1809 session. Late in 1807 Nelson County was created out of the part of Amherst County where Cabell resided, and the formation of the new county government, combined with his family connections, offered him a chance to move quickly up the political ladder. Cabell became a justice of the peace in 1808 and the following year was elected to the House of Delegates from Nelson County and served on the Committee of Privileges and Elections. In 1810 he was elected to the Senate of Virginia from the district initially composed of the counties of Albemarle, Amherst, Buckingham, Fluvanna, and Nelson. Cabell served in the Senate until 1829 and chaired the Committee of Privileges and Elections in 1814. 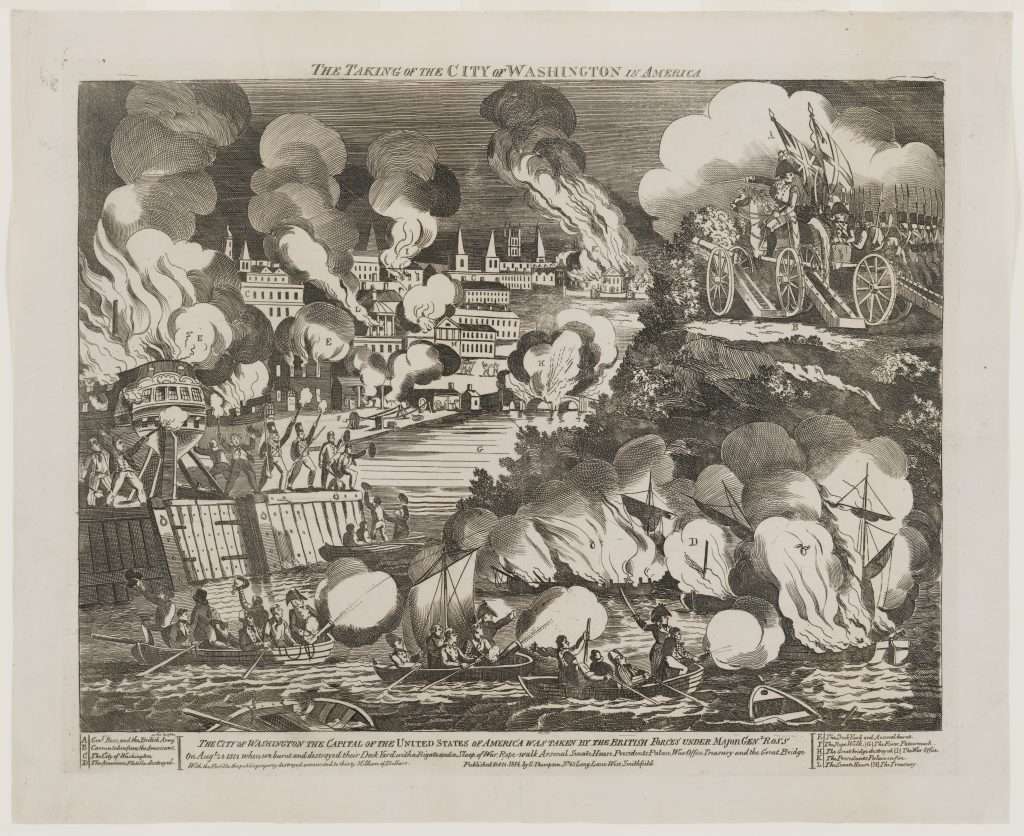 The Taking of the City of Washington in America

In the first years of his legislative service Cabell, reflecting an aristocratic mind-set that was at war with his republican political beliefs, developed a distaste for public life and politicians. Objecting to the ambition and flexible principles he perceived in his colleagues, he remained largely inactive during his early years in the assembly. Cabell’s poor health also limited his enthusiasm and encouraged him to hire a substitute during the opening months of the War of 1812, although he briefly served in person when the British invaded the Chesapeake in 1814.

Cabell’s political lethargy came to an end after the war when he became one of the most active and influential members of the Senate. He leaped into the struggle to charter and fund Central College, later the University of Virginia. Thomas Jefferson tapped Cabell in 1815 to lead the legislative fight to establish the university. Inspired by the former president’s vision of republican education, Cabell adopted the cause as his own and persevered through years of bitter battles over the site for the institution and its appetite for public funds. Cabell led the effort in 1818 and 1819 to commit Virginia to making the college at Charlottesville the state’s principal university instead of expanding either the College of William and Mary or Washington College (later Washington and Lee University) in Lexington. After securing approval of the charter, he pushed through a bill to permit the university’s board of visitors to borrow money, and in 1825 he blocked a proposed move of William and Mary to Richmond that was perceived as a threat to the new university.

Cabell remained associated with the university long after its opening in 1825. He served on its first board of visitors, and his influence in Richmond was crucial in diverting money to the university from a variety of sources. After his retirement from active politics Cabell served as rector of the University of Virginia from 1834 to 1836. He returned to that post after embarrassing student riots in 1845 and remained on the job until shortly before his death in 1856. Cabell’s interest in education also led him to propose during the 1820s that a college preparatory school be established in Nelson County, and he drew plans for the buildings. The school was never opened, but Cabell’s drawings probably served as the basis for the buildings erected during the 1830s for Randolph-Macon College‘s first campus, at Boydton in Mecklenburg County. 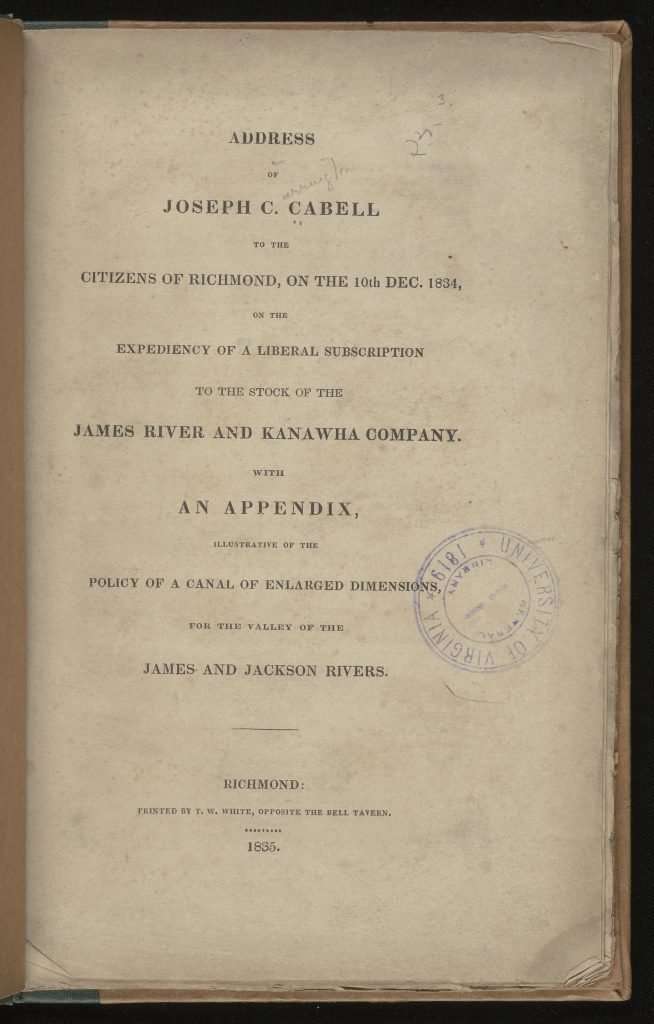 Cabell’s long years of fighting for the university took a toll on both his health and his personal finances, and he retired from the Senate in 1829. Yet his zeal for the economic development of Virginia soon led him back into politics to fight for the James River and Kanawha Canal. Begun in the 1780s, the canal had been envisioned as a continuous water transport route between Richmond and the Ohio River, but by the 1820s financial problems and conservative management had resulted in limited construction, consisting only of a short route around the falls of the James River at Richmond. The success of New York’s Erie Canal inspired Cabell and others to revive the old plan. Aroused by his service as a representative of Nelson County at a statewide convention on internal improvements held at Charlottesville in 1828, he returned to the House of Delegates in 1831 to lobby for the westward extension of the canal. As a leading member of the Committee of Roads and Internal Navigation, Cabell drafted a new act of incorporation and secured legislative approval in the spring of 1832. In subsequent years he convinced the assembly to fund the project and to authorize Virginia’s banks to purchase its stock. He served in the General Assembly through the 1834–1835 session.

In May 1835 Cabell was elected the first president of the reorganized James River and Kanawha Company. Construction had reached Lynchburg by 1840, but the continuing depression of the ensuing decade slowed the canal’s extension and forced the company to borrow heavily. Cabell also inadvertently hurt the project through an unyielding insistence on a continuous canal route to the Ohio River rather than accept a compromise that involved building a railroad through part of the western mountains. Financial scandals also embarrassed the company, and in 1842 a flood severely damaged portions of the canal. A legislative investigation cleared Cabell of charges of mismanagement following those episodes. The troubles scarred him, however, and he resigned the presidency in 1846. The canal transported a large volume of traffic until after the American Civil War (1861–1865), but construction stopped at Buchanan in 1854, and the company’s stockholders never realized a profit from their investment.

Cabell’s later years were marked by a steady withdrawal from public life. He apparently adhered to the old principles of Jeffersonian Republicanism more as a result of Virginia patriotism and his friendship with Jefferson than from dedication to the emerging principles of popular democracy. Cabell’s conservatism left him increasingly out of step with his neighbors. During the 1820s and 1830s he opposed Virginia’s emerging Democratic Party, and unlike many other inhabitants of the Piedmont and points west he supported continued apportionment of the assembly on a basis that gave the eastern counties with their large populations of slaves a larger representation than their adult white population entitled them to. Many of Cabell’s neighbors, on the other hand, supported western reformers who advocated apportionment of seats based solely on the number of white men. His position on legislative apportionment and his support for federal tariffs led to his defeat for reelection to the House of Delegates in 1835.

In the summer of 1850 Cabell ran for a seat in the state constitutional convention that assembled later that year, but his continued support for the old basis of representation was hopelessly out of touch with the convictions of his neighbors, and he was easily defeated. His loyalty to an anachronistic brand of gentry politics limited his general popularity. Regarded highly enough to be asked to run for Congress and, reportedly, to have been asked to serve in the cabinet, Cabell was so conservative and suffered from such poor health that he probably could never have realized any loftier ambitions he might have possessed. His political career was played entirely on the Virginia stage, where he was nevertheless one of the most influential and respected men of the antebellum period.

Cabell and his wife had no children, but he served as a mentor and father figure to many younger members of the numerous Cabell family, particularly his nephew Nathaniel Francis Cabell, who became a writer and historian. Cabell died at Edgewood plantation in Nelson County on February 5, 1856, and was buried in the family cemetery in the garden.