William Francis Ferguson Broaddus was born on April 30, 1801, near Woodville in the portion of Culpeper County that in 1833 became Rappahannock County. He was the son of Susannah Ferguson White Broaddus and her second husband, Thomas Broaddus. Dissatisfied with the awkwardness of his name, he asked his mother for permission to drop one of his middle names. She agreed, and he was always known thereafter as William F. Broaddus, but he never disclosed which name he had dropped. His father died when Broaddus was about ten years old. He attended local schools and by the age of sixteen was sufficiently educated to become a schoolmaster. On October 28, 1819, he married Mary Ann Farrow. They had four sons and two daughters.

In 1823 Broaddus joined the F. T. Baptist Church in Culpeper County, and the following year he was ordained as its pastor. He was a natural and easy speaker, described as laborious rather than studious in his preparation. In 1826 Broaddus moved to Bethel Baptist Church in Frederick County. He became a supporter of those Baptists who advocated missionary work and evangelism and opposed the views of those who feared that innovations such as traveling ministers, Sunday school associations, and other evangelical work would corrupt the principle that individual salvation was possible only through God’s intervention.

In 1827 the Ketocton Baptist Association defeated Broaddus’s proposal that money be raised to spread the gospel among the poor, and some members threatened to abstain from fellowship with any Baptist who advocated missionary efforts. Four years later he was criticized for organizing a four-day revival meeting. In 1833 the association denied Broaddus a seat at its annual meeting, and shortly thereafter the Columbia Baptist Association also refused to admit him to its conference. Angered, delegates from Bethel and from the Long Branch Baptist Church, of which he was also pastor, withdrew from the Ketocton and Columbia Baptist associations and formed the evangelical Salem Union Baptist Association. In 1835 the Columbia Association relented and allowed Broaddus to participate, but five antimissionary congregations left the association. The rift was not healed for many years, but later church historians gave Broaddus much of the credit for the eventual evangelical triumph over antimission Baptists in the region. 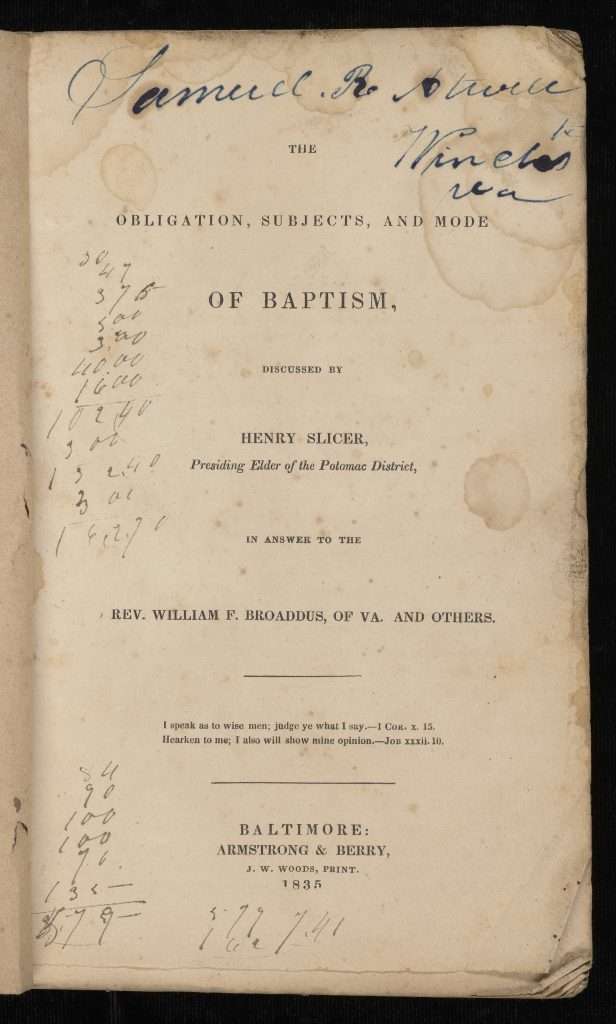 The Obligation, Subjects, and Mode of Baptism

Between 1834 and 1839 Broaddus was pastor of Bethel, Long Branch, Middleburg, and Upperville Baptist churches in Frederick and Loudoun counties. He also conducted a boarding school for girls at Middleburg in Loudoun County. In 1836 Broaddus engaged in a public exchange with another minister, Henry Slicer, over the nature of baptism. He argued that only repentant believers should be baptized in Letters to Rev. Mr. Slicer, in Reply to his “Appeal” on “Christian Baptism.”

From 1840 to 1845 Broaddus was minister of the First Baptist Church in Lexington, Kentucky. From 1845 to 1851 he was president of the Shelbyville Female Institute in Shelbyville, Kentucky, and during part of the time he served the Baptist church in Versailles as well. A fire at the institute destroyed the diary that Broaddus had kept since his youth. His wife died on September 8, 1850, and on July 29, 1851, he married a widow, Susan Burbridge, of Kentucky, before moving to Washington, D.C., as an agent raising funds for Columbian College (later George Washington University). Broaddus had been a trustee from 1838 to 1841 and served again from 1859 to 1872. As Columbian’s agent he raised an endowment of more than $40,000. In 1854 the college awarded Broaddus an honorary DD. His second wife died on April 21, 1852, and exactly one year later he married another widow, Lucy Ann Semple Fleet. They had one daughter.

Broaddus moved back to Virginia in 1853 as pastor of Fredericksburg Baptist Church, and on October 1, of that year he opened the Fredericksburg Female Academy. Principally a minister and educator rather than a scholar, he nonetheless engaged in another debate on baptism, this time with Archibald Alexander Hodge. In Strictures on Rev. A. A. Hodge’s Four Sermons on Infant Baptism (1858), Broaddus maintained that infant baptism was contrary to Scripture because only repentant believers could be baptized. In 1859 his church granted him a year’s sabbatical to study at the Southern Baptist Theological Seminary in Greenville, South Carolina.

The Civil War disrupted Broaddus’s ministry. On July 29, 1862, the U.S. Army arrested him and eighteen other Fredericksburg residents and held them in Washington’s Old Capitol Prison until they could be exchanged for prisoners of war being held in Confederate prisons. He and one of the other captives, Belle Boyd, were paroled on August 29, and traveled together to Richmond, where Broaddus worked out a prisoner exchange with the Confederate government. Broaddus obtained his own release on September 24, 1862, and returned to Fredericksburg. Wartime damage to his house destroyed a draft autobiography and all the diaries he had kept since the Shelbyville fire.

Broaddus served as pastor of the Charlottesville Baptist Church from January 1863 until 1868, when he resigned and returned to Fredericksburg to raise money under the auspices of the Baptist General Association of Virginia for the education of children of deceased or disabled Confederate soldiers. In three years he helped more than 2,000 children receive school tuition.

In 1867 Broaddus delivered and published a Centennial Sermon of the Potomac Baptist Association, of Virginia. This history of the early churches of the northeastern Piedmont in part described his own role in the split over evangelism and missionary work. From 1868 to 1876 Broaddus served as a trustee of the Southern Baptist Theological Seminary, and he was an overseer of Columbian College from 1872 until he resigned in 1874. His eyesight began failing during the last years of his life, and he suffered the effects of dementia near the end. Broaddus died in Fredericksburg on September 8, 1876, and was buried with Masonic rites in the city cemetery. A tablet commemorating his service was later placed in the Fredericksburg Baptist Church.