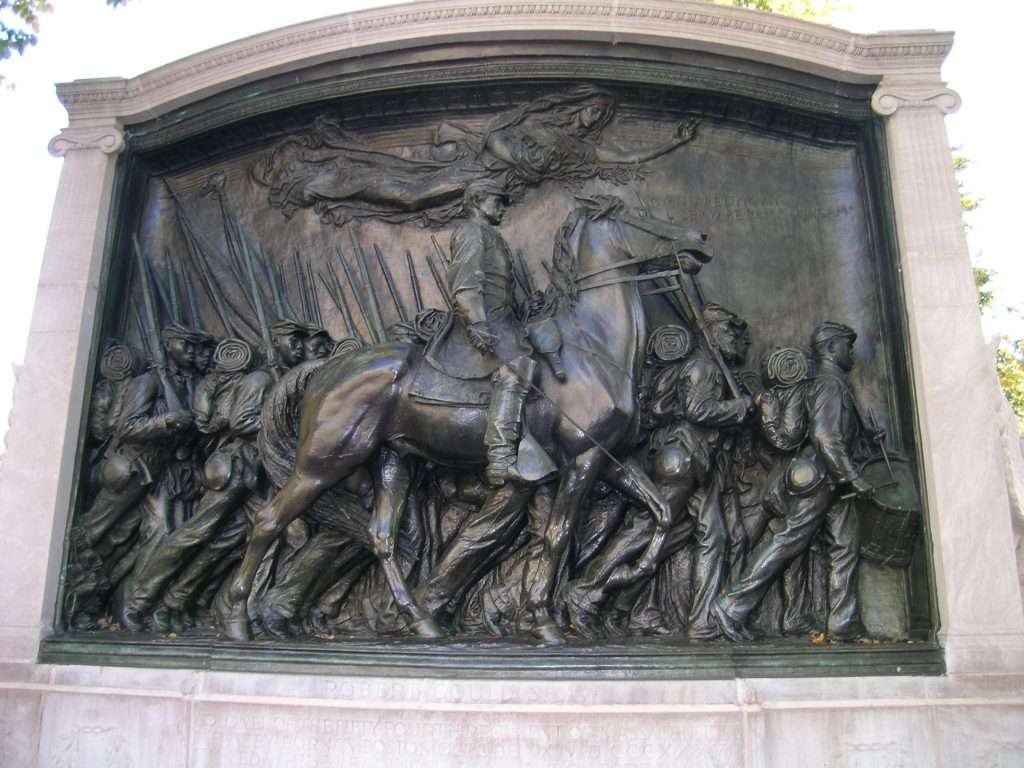 A bronze, high-relief sculpture commemorates the soldiers of the 54th Massachusetts Infantry, the first documented regiment of African American soldiers formed in the North, and their commander, Union colonel Robert Gould Shaw.

Located in Boston, Massachusetts, across from the Boston State House, the memorial depicts Shaw (on horseback) and his men marching down Beacon Street on May 28, 1863. On July 18, 1863, the men of the 54th attacked Fort Wagner in South Carolina and suffered heavy casualties. At least seventy-four infantrymen were killed, along with three officers, including Shaw. Though severely injured, Sergeant William H. Carney saved the regiment’s flag from being captured and was later awarded the Congressional Medal of Honor, the first African American to be so honored.

Augustus Saint-Gaudens, one of the most famous sculptors of the era, was commissioned to create the work. It took him nearly fourteen years to complete the monument, which was unveiled on May 31, 1897.

The following text by Charles W. Eliot is carved on the back of the monument:

The White Officers taking life and honor in their hands cast in their lot with men of a despised race unproven in war and risked death as inciters of servile insurrection if taken prisoners besides encountering all the common perils of camp march and battle. The Black rank and file volunteered when disaster clouded the Union Cause. Served without pay for eighteen months till given that of white troops. Faced threatened enslavement if captured. Were brave in action. Patient under heavy and dangerous labors. And cheerful amid hardships and privations. Together they gave to the Nation and the World undying proof that Americans of African descent possess the pride, courage and devotion of the patriot soldier. One hundred and eighty thousand such Americans enlisted under the Union Flag in MDCCCLXIII-MDCCCLXV.