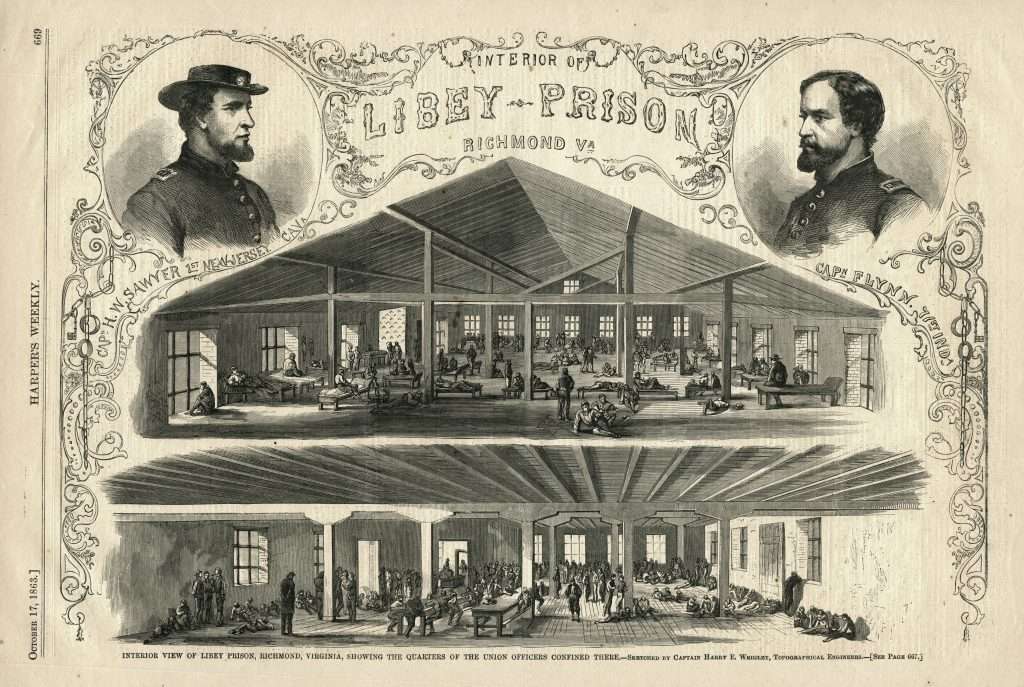 This engraving published in Harper's Weekly on October 17, 1863, shows an interior view of Libby Prison in Richmond, Virginia, where Union officers were held during the Civil War. The rooms were only lightly furnished and generally open to the elements, with bars over the windows. Any officer who approached a window risked being shot by Confederate guards. Harper's credits the engraving to Captain Harry E. Wrigley of the Topographical Engineers, "who was several months in Libey Prison, and had ample leisure to make drawings and observations."

The magazine also reports that the Wrigley portraits, in the upper left and right of the image, are of "Captains Sawyer and Flynn, the two officers who were selected by Jeff Davis to be murdered in retaliation for the execution by General Burnside of two rebel spies. The despot of the Slave Confederacy has not yet carried his threat into execution; but the sentence of death still hangs over the two officers, and must be hard to bear." Union officials responded by threatening to execute two prominent prisoners of its own, the sons of John Winder, provost marshal of Richmond, and Confederate general Robert E. Lee. In the end, the executions did not take place, and in March 1864, Henry W. Sawyer was exchanged for Fitzhugh Lee.

Union spy Elizabeth Van Lew lived just six blocks from the prison and although she was never able to gain entrance there, she bribed guards for various purposes, such as having prisoners transferred to hospitals where she might visit them. In several cases, she passed information to inmates using a custard dish with a secret compartment. In 1864, as the head of a Richmond spy network managed by Union general Benjamin F. Butler, she may have assisted some of the 109 prisoners who tunneled out of Libby. Fifty-nine eventually reached Union lines.