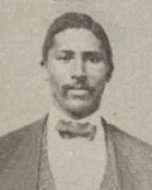 William Gilliam, a Republican member of the Virginia House of Delegates from 1871 to 1875, is shown in this detail from a composite photograph of the members of the Virginia Legislature, 1871–1872. Gilliam represented Prince George County for two terms and then lost an election for a third term after a number of ballots were lost. Gilliam contested his defeat, but officials claimed they were unable to conduct a recount.
FEATURED IN