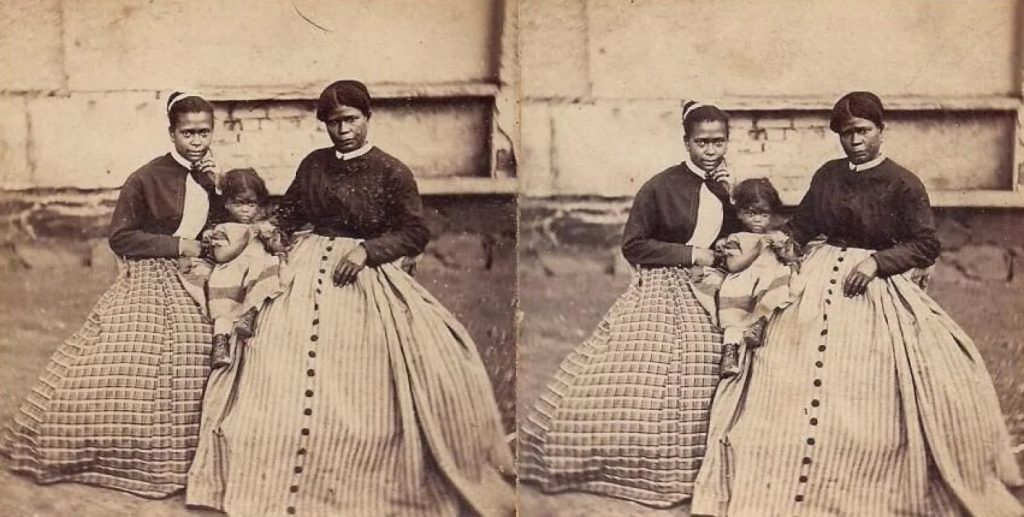 Selina Norris Gray with Two of Her Children

This Civil War-era stereograph shows enslaved Selina Norris Gray with two of her eight children, probably seated in front of the south slave quarters at Arlington House where she, her husband, and children lived in a single room. Mary Custis Lee, the great-granddaughter of Martha Washington and the husband of Robert E. Lee, enslaved Gray and her family. Gray served as Mary Custis Lee's personal maid, and when the Civil War broke out and the Lee family had to flee Arlington House, Gray was entrusted with the keys to the household. Gray is credited with safeguarding most of the estate's family heirlooms that had been passed down from George and Martha Washington. When Gray learned that some of the treasures had been stolen, she confronted the U.S. soldiers and their commanding general, and the remaining Washington material was sent to the U.S. Patent Office for safekeeping. Gray and her family were eventually freed but remained on the estate for several years after, and when Arlington House was renovated in the 1920s and 1930s some of her children helped with the process.

This double-image, which produces a three-dimensional view when looked at through special glasses, was discovered in a box of miscellaneous photographs being sold at a "boot sale," or yard sale, in Kent, England. The National Park Service, alerted to the stereograph's existence, purchased this rare find in 2014.