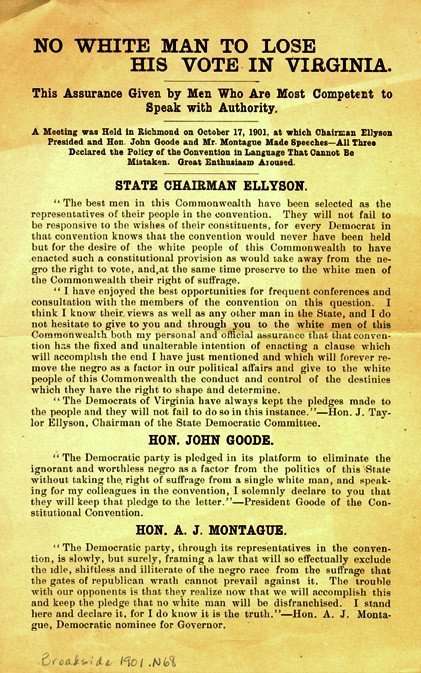 No White Man To Lose His Vote In Virginia.

In this 1901 broadside, Democratic leaders reassure white men in Virginia that proposed amendments to the state constitution will not strip them of their voting rights. The Constitutional Convention of 1901–1902 produced the Constitution of 1902 and is an important example of post-Reconstruction efforts to restore white supremacy in the American South by disfranchising large numbers of blacks. The convention was dominated by Democrats, including state party chairman, J. Taylor Ellyson; the convention's president, John Goode; and the party's gubernatorial candidate, Andrew J. Montague, all of whom are quoted here. Goode emphasized that the party "is pledged in its platform to eliminate the ignorant and worthless negro as a factor from the politics of this State without taking the right of suffrage from a single white man." Despite such assurances, many working-class whites were effectively disfranchised by the Constitution of 1902.