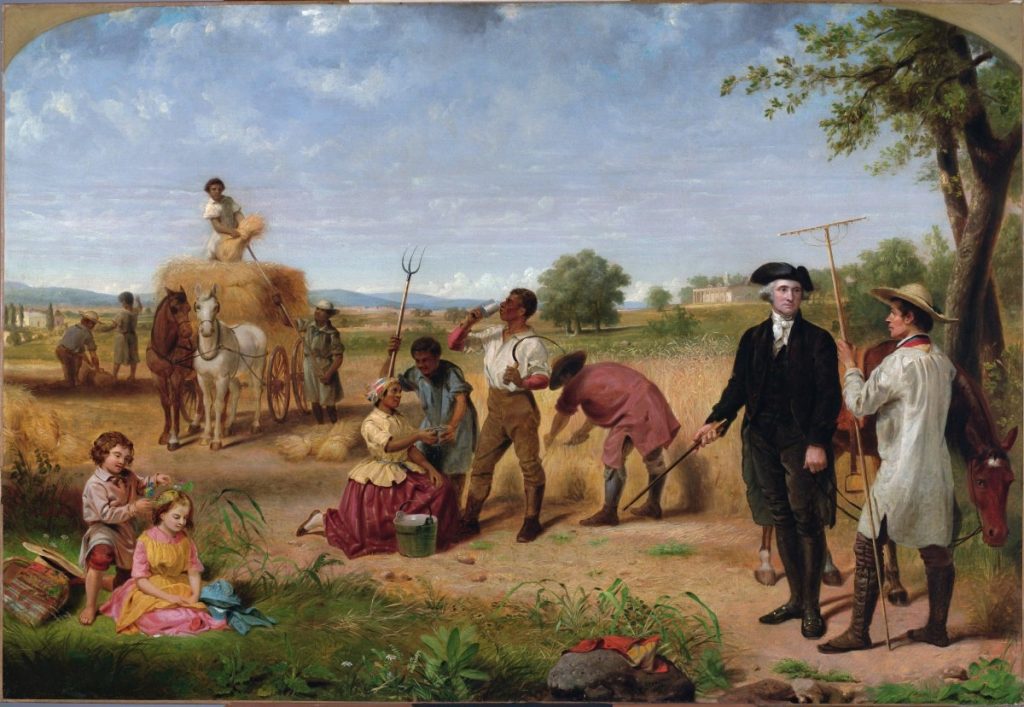 Washington as a Farmer at Mount Vernon

George Washington is seen here inspecting the wheat harvest at his Virginia plantation, Mount Vernon, during his retirement years after serving as president. This was one of five large historical paintings by artist Junius Brutus Stearns that were created between the years 1847 to 1856. The fiftieth anniversary of Washington's death was 1849, so during the years around that date there was a renewed interest in Washington as an iconic American hero. Most of the Washington paintings produced by Stearns, including this one, were made into lithographic prints that were widely circulated among the public.

This bucolic farm scene shows healthy, well-dressed enslaved laborers working under the gentle supervision of an overseer in a white coat. Washington's step-grandchildren are seen at left, the barefooted grandson putting flowers into his sister's hair. Images such as this one gave a distorted view of the reality of chattel enslavement and the harsh conditions endured by enslaved farm hands. The timing of the painting also did not reflect the increasingly contentious arguments against slavery in the mid-nineteenth century. A curator at the Virginia Museum of Fine Arts, the institution that owns the painting, notes:

Stearns’s idealized vision of a harmonious system of cooperative farming belies the growing national furor over the question of slavery. The Compromise of 1850, a tenuous congressional agreement between North and South, was already unraveling.