When it crashed, the Old 97 was en route from Monroe, Virginia, to Spencer, North Carolina. The route usually took four and a quarter hours, but the train had left Monroe an hour late. In an attempt to preserve the train’s reputation for always being on time, engineer Joseph A. “Steve” Broadey reportedly increased the locomotive’s speed to 50 miles per hour, or a 10 mph increase over its normal speed. (Southern Railway officials later claimed he had pushed the speed as high as 70 mph.) As the train descended the curved tracks approaching the Stillhouse Trestle, Broadey was unable to reduce the speed, and reversed the engine in order to lock the wheels. The speeding train continued straight ahead as the tracks curved, soaring dramatically away from them before the locomotive and all four cars hit the rocky bottom of the shallow creek below.

Eleven people were killed, including the locomotive crew and a number of clerks assigned to oversee the mail hauled on the train. Newspapers across the country ran photographs of the wreckage and reported on the thousands of people attending the scene of the accident, women fainting at the grisly sight of the debris, and firefighters summoned to put out the fires ignited by the steam engine. Two of the spectators were Fred Jackson Lewey, whose cousin Albion Clapp was one of the firemen called to the train, and David Graves George, a Pittsylvania County telegraph operator.

A number of ballads were written about the wreck, the most popular of which became an early country hit and the first million-selling record in the United States when recorded by Vernon Dalhart for RCA Victor Records in 1924. That version of the ballad was credited to Lewey and his cowriter, Charles W. Noell. An earlier version was recorded by Virginia musicians G. B. Grayson and Henry Whitter for Okeh Records. The music was based in large part on the late-nineteenth-century ballad “The Ship That Never Returned” by Henry Clay Work.

According to the Blue Ridge Institute at Ferrum College, “The Wreck of the Old 97” also produced “the first major lawsuit involving copyright” when David Graves George subsequently sued RCA Victor Company, claiming original authorship of the ballad. Though he won his case and was awarded $65,000 on sales of five million records, the record company managed to tie the matter up in appellate court long enough to prevent George from ever collecting damages. 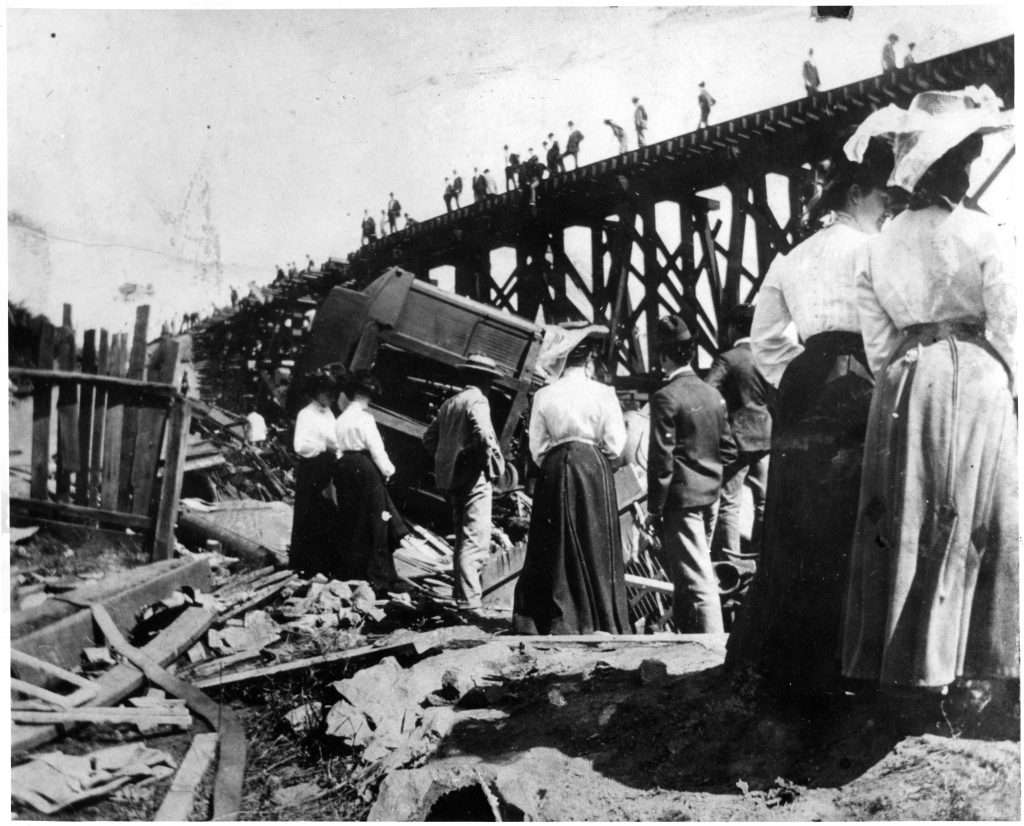 Women and Men Surveying the Wreck of the Old 97
The song “The Wreck of the Old 97” joins a long history of folk songs about disasters. Its lyrics lament the Old 97 as “the fastest train / Ever ran the Southern line,” and linger over the grisly details of Broadey being “scalded to death by the steam,” turning the story into a cautionary tale for wives, who shouldn’t scold their husbands lest the argument be the last words the couple has together. In 1959, the Kingston Trio recorded “The MTA Song,” about a man trapped on the Boston subway system because of a fare increase, using the same tune as Dalhart’s version and continuing the tradition of updating the disaster ballad for changing times. The story of the wreck of the Old 97 lives on even in contemporary music through the country-rock band the Old 97s. Formed in 1993, the Dallas, Texas, band takes its name from the folk ballad.
EXTERNAL LINKS

Deathly Lyrics (Songs of Virginia Tragedies): The Wreck of the Old 97