Since June 1861, Confederate soldiers and impressed slaves had been building a defensive line just east of Williamsburg. Located partly in James City County and partly in York County, Williamsburg numbered 1,895 people, according to the federal census of 1860, 743 of them enslaved. Its location at the narrowest part of the Peninsula between the James and York rivers meant that any Union advance toward Richmond would have to pass through the former capital. The defensive fortifications at Williamsburg and another line to the east at Yorktown were built to defend against such an advance. The Williamsburg defenses consisted of fourteen earthen forts, or redoubts. The largest of these, called Fort Magruder, was linked with the remainder of the line by an intricate network of trenches, rifle pits, and felled trees.

By the spring of 1862 the Army of the Potomac, more than 130,000-men strong and under the leadership of the Union general-in-chief George B. McClellan, began its march up the Peninsula intent on taking the Confederate capital at Richmond from the southeast. Confederate general John B. Magruder’s much smaller force—numbered at between 11,000 and 15,000 men—was charged with delaying the Union advance and thereby allowing other Confederate forces to consolidate.

On April 5, 1862, both armies had settled around the Yorktown defensive line. Ever cautious and relying on faulty intelligence, McClellan believed that he faced as many as 40,000 men. After some initial maneuvering and skirmishing to test the Confederate defenses, he prepared for a siege. Capitalizing on this delay, Magruder coordinated with other Confederate units that were making their way to the Peninsula and Richmond, so that by the end of April, Confederate forces in the area added up to about 56,000 men. Even so, McClellan’s intelligence inflated Confederate strength to more than 100,000 men.

During the evening of May 3 and under the cover of its own artillery, the Confederate army abandoned the Yorktown line and began falling back toward Williamsburg, about twelve miles away. The subsequent Union pursuit on May 4 resulted in skirmishes along Hampton and York roads just outside Williamsburg. 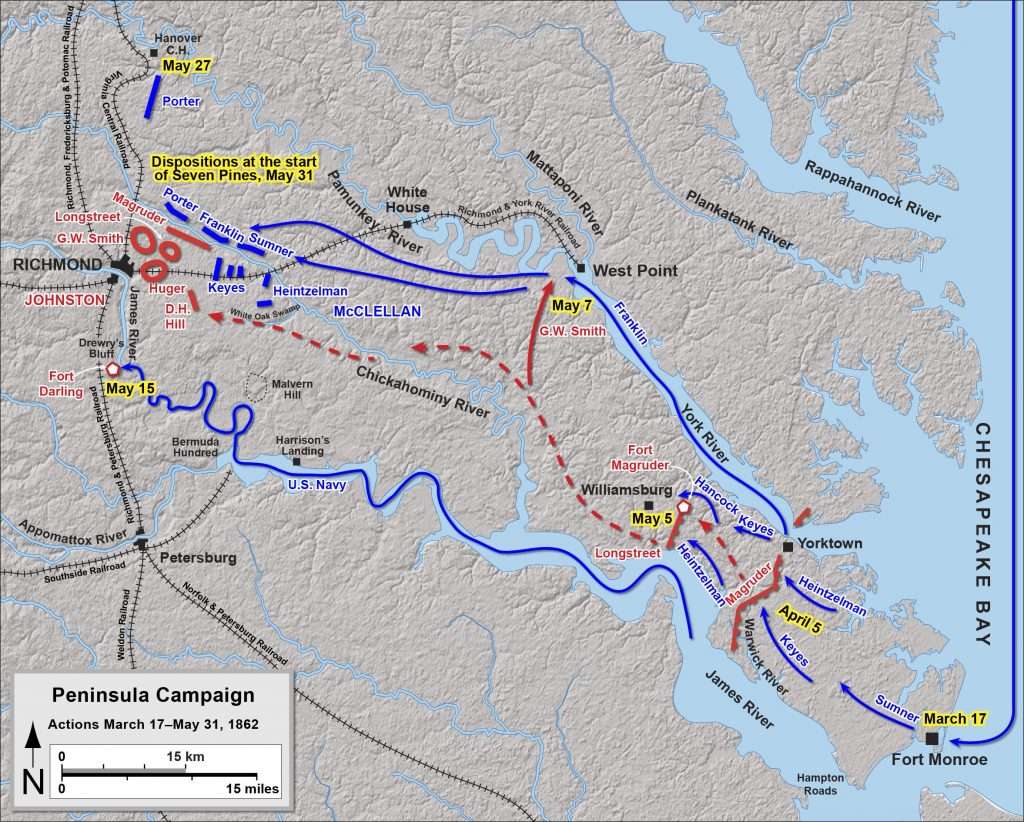 At dawn on May 5, 1862, leading elements of the Army of the Potomac deployed in a driving rain just short of Fort Magruder. Union cavalry, artillery, and infantry pushed Confederate skirmishers back to their fortifications. Behind the leading Union skirmishers and stretched out for miles on both Hampton and York roads was the majority of the Army of the Potomac. Since McClellan arrived late in the day, field command fell on a number of his divisional and brigadier generals.

Under the overall command of Joseph E. Johnston, much of the Confederate army had already passed through Williamsburg on its way from Yorktown to the defenses of Richmond. As the battle intensified throughout the day, however, several of these units countermarched, or turned around, coming to the aid of Confederate general James Longstreet, who was in command of the rearguard at Williamsburg.

By mid-morning, Union infantrymen from New Jersey, under the command of General Francis Patterson, had turned off Hampton Road and charged into the ravine southeast of Fort Magruder. There they were met by Confederate troops from Alabama and Mississippi commanded by General Cadmus M. Wilcox, of North Carolina. Supported by their respective artillery, these brigades clashed in the confusing undergrowth, felled trees, and swampy ground, slipping and sliding and occasionally mistaking friend for foe. Colonel Nelson Taylor’s “Excelsior Brigade,” made up of New Yorkers, rushed into line to support the Jerseyans and was met by two brigades of Virginians under A. P. Hill and George E. Pickett, who had rushed to support Wilcox.

According to Union general Joseph Hooker‘s official report, “The battle had swollen into one of gigantic proportions.” Close quarters and hand-to-hand combat was commonplace. With the New Jersey regiments exhausted and out of ammunition, the combined strength of more than a dozen Confederate regiments began to force the Union soldiers back. Lieutenant Lawrence Meem, adjutant of the 11th Virginia Infantry Regiment, captured the moment in a letter to his father, dated May 10, 1862: “As we were going out of the ravine a tremendous cheer was sent up in the woods … [and] the whole Regiment commenced double quicknin up the hill cheering as they went.”

By noon and with the rain still falling, both sides were heavily engaged and strengthening their lines. The battle had reached its sixth hour. Williamsburg’s public buildings and private homes were inundated with the dead and dying. Private John Taylor Chappell, of the 10th Virginia Cavalry, later wrote that despite the rain and wounded, Williamsburg residents “with field glasses were watching the tide of battle as it ebbed and flowed.” A few miles to the east at Union headquarters on York Road local slaves reported to Union general Erasmus D. Keyes that, as Keyes wrote in his official report, “some of the enemy’s works on his left were not occupied.” Union general Edwin V. Sumner dispatched Winfield Scott Hancock with a brigade of infantry and artillery to investigate. 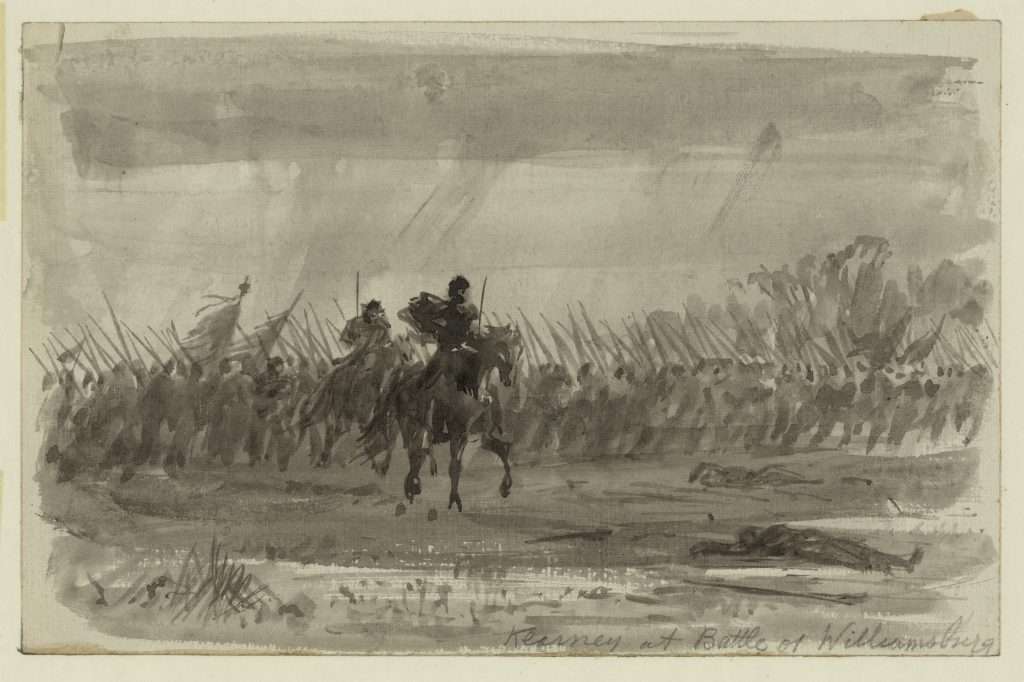 Kearney [sic] at Battle of Williamsburg

As the afternoon wore on, the large Confederate counterattack had shoved the Union infantry across Hampton Road. Short of ammunition, Colonel William Dwight Jr., commander of the 70th New York Volunteer Infantry Regiment, sent a message to his superior, Nelson Taylor, “Tell Col. Taylor we will all die here or hold the position.” Union artillerist Major Charles S. Wainwright saw the Union lines collapsing and instructed his gunners to hold their fire until the Confederates got closer. He later wrote in his journal that, “three rounds to a gun then blew the whole thing away.” Their combined tenacity was not enough to stem the overwhelming tide of cheering Confederates, some mounting the captured Union guns, waving their flags wildly. At this moment, during the height of the Confederate attack, a fresh Union brigade commanded by John J. Peck appeared on York Road and slammed headfirst into the Confederate onslaught. At the same time, along Hampton Road, Union general Philip Kearny, “flourishing a sword in his only arm,” pitched his tired infantrymen into the Confederate flank. Over the next two hours they forced the Confederate soldiers back into the fortifications around Fort Magruder.

Memories of the Battle of Williamsburg
Late in the afternoon, as the battle and the weather showed no signs of slackening, Hancock’s maneuver and subsequent occupation of the empty redoubts was discovered. Longstreet reluctantly dispatched Jubal Early to secure this section of the Confederate line, reasoning that, as he explained in his memoir, From Manassas to Appomattox (1896),”We were only fighting for time to draw off our trains.” Only two of Early’s four regiments emerged from the dense, tangled undergrowth to challenge Hancock’s commanding position. Charging across a field and through a farmyard toward the Union line, the disjointed Confederate assault was cut to pieces by concentrated infantry and artillery fire. Just as the Confederate lines began to break, Union infantry rushed forward. Hancock later wrote in his official report, dated May 11, that as night fell, “For 600 yards in front of our line the whole field was strewn with the enemy’s dead.”

During the night of May 5, 1862, the Confederate army quietly abandoned the Williamsburg line. Ten hours of sustained combat had produced 4,000 casualties (including those killed, wounded, and captured) and no significant change in the position of the armies. For the first time ever, Union soldiers—Hancock’s men in this case—captured a Confederate battle flag. In a telegram to his wife, McClellan wrote, “Hancock was superb.” (The adjective stuck as the general’s nickname.) Seven Union soldiers were awarded the Medal of Honor for their conduct in and around what would now be known as the “bloody ravine.” As the two armies marched west toward Richmond, Seven Days’ Battles would overshadow the fight at Williamsburg in all but the veterans’ accounts. 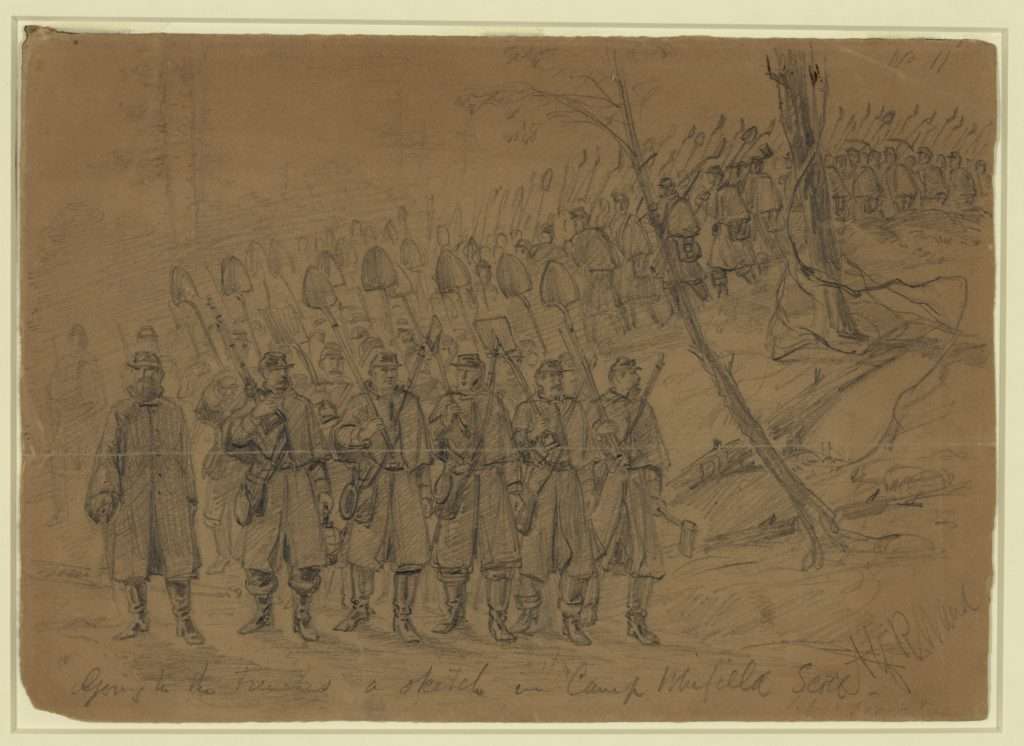 Going to the trenches—a sketch in Camp Winfield Scott. Before Yorktown

Private Edwin Y. Brown of the 1st Massachusetts Infantry commented, “The battle of Williamsburg has received less importance in history than it has merited.” Scholarship at the beginning of the twenty-first century, however, has reasserted its significance. The battle provided many enlisted men and officers alike their first taste of combat and, for Union soldiers specifically, another obstacle built by enslaved laborers. Reports and letters home commented on how, at Yorktown, slaves were sent out under hazardous conditions while Confederate soldiers remained protected by earthworks. Perhaps more selfishly, Union soldiers also took note that the lines at Yorktown and Williamsburg and, later in the war, at Petersburg and Richmond, were dug by African Americans. Union soldiers, of course, dug their own.

As argued by the historian Glenn David Brasher and others, such observations began to change the course of the war. At Yorktown, Williamsburg, and for the remainder of the Peninsula Campaign, even those Union soldiers without prior antislavery or abolitionist sentiments began to discuss the issue and raise concerns about the value of slave labor to the Confederates. In fact, in The Peninsula Campaign and the Necessity of Emancipation: African Americans and the Fight for Freedom (2012), Brasher asserts, “The issue of slaves fleeing to Union lines was less important in the debate over emancipation than was the military contribution of African Americans” to both sides. Moreover, according to Brasher, the Peninsula Campaign “was more important for bringing about emancipation than was the Battle of Antietam”—the battle later that year that provided President Abraham Lincoln an excuse to issue the Emancipation Proclamation.