Lucas was born into slavery in Prince William County and was the son of Jerry Lucas, a free man, and Fanny, or Frances, Lucas, an enslaved woman. His mother’s owner prepared him to be a house servant and leased him to work for other people, including a woman who directed her son to teach Lucas the alphabet. When the Civil War ended, he lived in the town of Gordonsville, in Orange County, where he had been in service to a Confederate surgeon who operated a hospital. For a few months he attended a local school that the Bureau of Refugees, Freedmen, and Abandoned Lands conducted and then, even as he continued to master reading and writing, he began teaching in a Freedmen’s Bureau school early in 1866. Lucas’s colleagues or supervisors described him as a patient and effective instructor.

About 1866 Lucas married Annie Robinson in Gordonsville. They had a daughter and another child who died in infancy or was stillborn before April 1869, when she left him and moved to Prince William County. There she had their son and later married another man and began a new family. Lucas filed for divorce on the grounds of adultery in March 1871 and received the divorce decree that November. On December 27, 1871, he married a fellow teacher, Phillis B. Broxton, in Louisa County. They had two sons prior to her death that likely occurred on July 12, 1875, while one of their sons died not long after on August 20 of cholera infantum. Lucas married Hannah W. Willis on December 14, 1876, in Louisa County. They had three daughters and two sons who grew to adulthood.

Lucas abandoned his hope of attending Hampton Normal and Agricultural Institute (later Hampton University) and became involved in Republican Party politics to advance “the cause we advocate, that of equal rights before the law.” In April 1867 Orange County Republicans selected Lucas as a delegate to the Republican convention that met at First African Baptist Church, in Richmond. After moving to Louisa County, he was named a delegate to the 1872 nominating convention of the Third Congressional District. In October 1873 he and fellow Republican George Turner won nomination for Louisa County’s two seats in the House of Delegates, and on November 4 both were elected to two-year terms with almost identical numbers of votes, 1,335 for Lucas and 1,330 for Turner. Two Conservative Party candidates each received between 1,100 and 1,200 votes. Republicans were in the minority in the sessions of the General Assembly that met early in 1874 and during the winter of 1874–1875, and the Speaker appointed Lucas to the lowest-ranking seat on the inconsequential Committee on Officers and Offices at the Capitol.

During the first session, Lucas introduced a bill to amend the section of the state code that provided for a prison sentence of five to ten years for any person convicted of stealing property worth more than $5 and imposed a prison sentence of three to eighteen years for any person convicted of stealing a horse, mule, or jackass. The provisions of the bill are not known, but it did not pass. Lucas voted against a proposed amendment to the state constitution to reduce the number of local elected officials, but he was absent and missed the vote when the delegates agreed to a change that the Senate of Virginia suggested.

During the second session of the General Assembly, Lucas made a motion to consider establishing “a normal school, for the instruction of colored teachers, to be under state control,” but the assembly did not do so until 1882. He also introduced a bill to amend the section of the code that listed items of personal property that could not be seized to pay a debt; the nature of his amendment is not recorded, but the assembly did not amend that section. In 1875 the General Assembly gave preliminary approval to a proposed constitutional amendment to impose a poll tax as a prerequisite for the franchise and to disfranchise people convicted of petty larceny. Its purpose was to reduce the number of African American voters, but for unknown reasons, Lucas voted for it. The following year when he was no longer a member of the General Assembly, it submitted the amendment to the voters who ratified it. 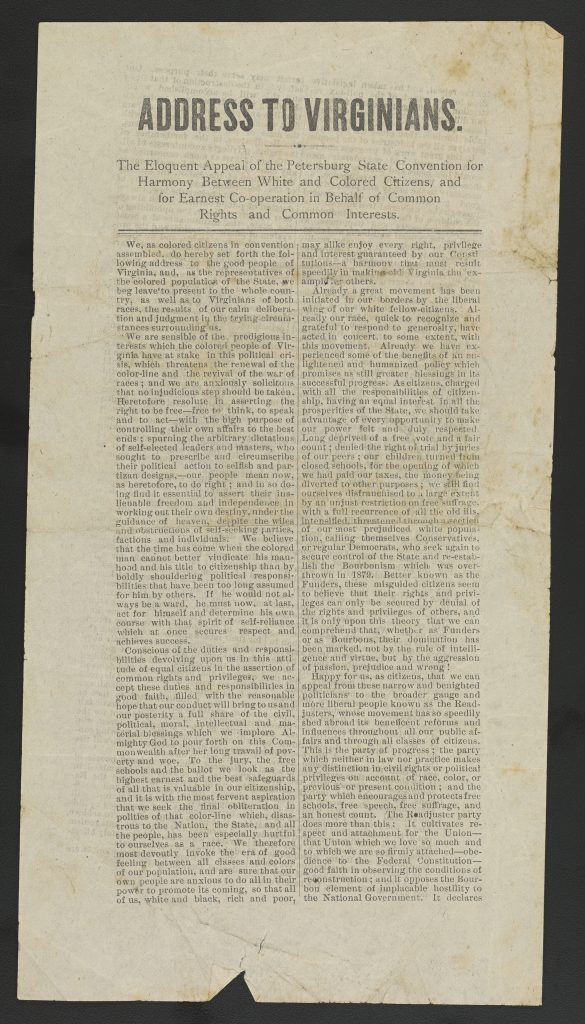 In April 1875 shortly after the General Assembly adjourned, Lucas was named to a committee to make arrangements for a statewide meeting of African Americans. He was one of about 100 delegates from across the state who attended the convention when it met in August to address economic and political discrimination faced by African Americans in Virginia. He either did not seek or did not receive the Republican nomination for a second term that year, but he continued to participate in politics. In 1881 Lucas attended a convention of African American Republicans who met in Petersburg to consider whether to join with the Readjuster Party, a biracial coalition that sought to reduce and refinance payments on the state’s crippling public debt to fund public education and other services. Lucas joined a minority of delegates who withdrew from the convention in protest of the decision to affiliate with the Readjusters and signed a public address recommending that Black voters support only candidates who pledged to abolish the whipping post, eliminate the poll tax, and maintain public schools.

Lucas had been without financial resources at the time of his divorce in 1871, but in May 1874, he purchased a sixty-eight-acre farm for $350. In 1881 he worked as a postal clerk for the Chesapeake and Ohio Railway. William P. Lucas died of heart disease in Louisa County on May 30, 1887. The place of his burial is not recorded.

William P. Lucas is born into slavery in Prince William County, the son of Jerry Lucas, a free man, and Fanny (or Frances) Lucas, an enslaved woman. He is taught the alphabet.

William P. Lucas lives in Gordonsville, in Orange County, and works for a Confederate surgeon who operates a hospital.

William P. Lucas attends a school sponsored by the Freedmen's Bureau and then teaches; around this year he marries Annie Robinson in Gordonsville.

William P. Lucas and Annie Robinson have a daughter and another child who dies in infancy or was stillborn.

Annie Robinson leaves her husband, William P. Lucas, and moves to Prince William County. There she has their son and later marries another man and begins a new family.

William P. Lucas is elected to a two-year term in the House of Delegates representing Louisa County. He is active introducing legislation to protect the rights of African Americans.

William P. Lucas is named to a committee to make arrangements for a statewide meeting of African Americans.

William P. Lucas attends a convention of African American Republicans.  He works as a postal clerk for the Chesapeake and Ohio Railway.