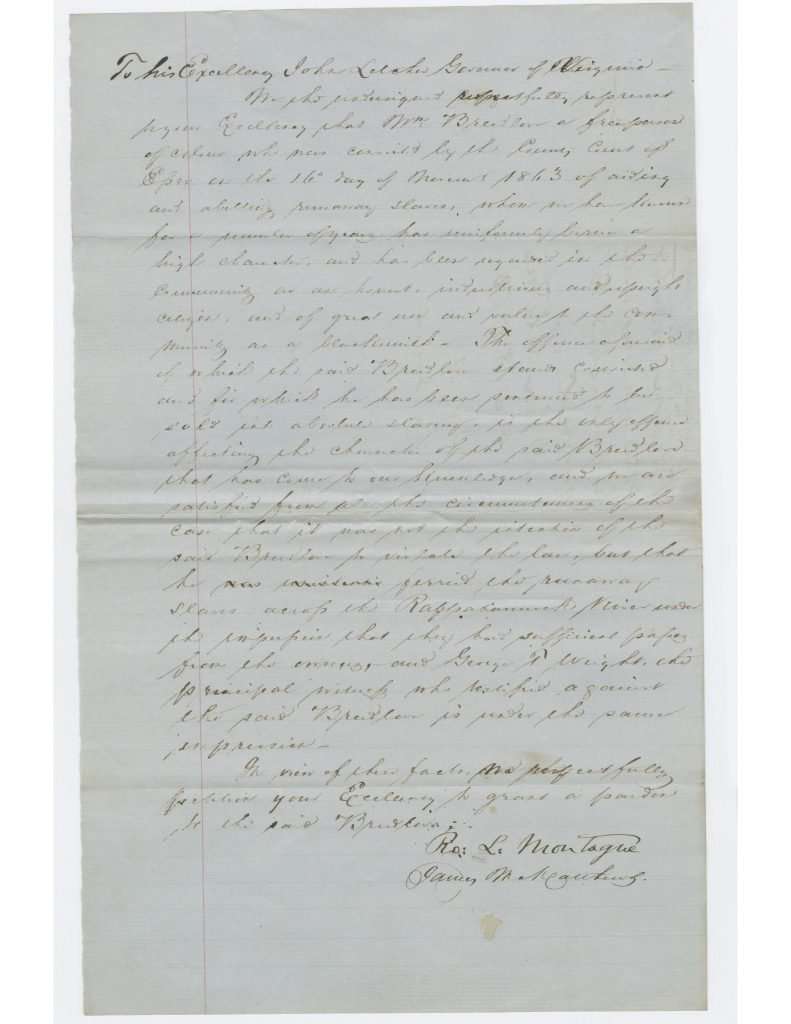 To his Excellency John Letcher Governor of Virginia—

We the undersigned respectfully represent to your Excellency that Wm: Breedlove a free person of colour who was convicted by the County Court of Essex on the 16th day of Novemb 1863 of aiding and abetting runaway Slaves, whom we have known for a number of years has uniformly borne a high character, and has been regarded in the Community as an honest, industrious and upright Citizen, and of great use and value to the Community as a blacksmith— The offence aforesaid of which the said Breedlove stands Convicted and for which he has been sentenced to be sold into absolute slavery, is the only offence affecting the character of the said Breedlove that has come to our Knowledge, and we are satisfied from all the circumstances of the case that it was not the intention of the said Breedlove to violate the law, but that he ferried the runaway Slaves across the Rappahannock river under the impression that they had sufficient passes from the owners, and George T. Wright, the principal witness who testified against the said Breedlove is under the same impression—

In view of these facts, we respectfully petition your Excellency to grant a pardon to the said Breedlove.

[notation on reverse:]
Application for the pardon
of Wm Breedlove
Pardon granted
& the reason will
be furnished to
morrow
John Letcher
Dec 18: 1863
Decr. 19
Pardoned

William Breedlove a free negro was convicted by the county court of Essex at the term held for the month of November last, of aiding slaves to escape from their masters, and sentenced to be sold into absolute slavery. At the time of his conviction the court recommended the prisoner to Executive clemency, but assigned no reason for the reccomendation. I therefore decide to interfere with this judgment. To day Lieutenant Governor Montague, Mr Matthews, and the Sheriff and deputy Sheriff of Essex have applied to me, for a pardon, and upon their representations as to his previous uniform good character and conduct, and the further representations that Judge Coleman who heard the evidence regarded it as wholly insufficient to warrant a conviction I direct his discharge.

RELATED CONTENT
Categories:
Type:
MAP
TIMELINE
December 18, 1863
James M. Matthews and Robert Latané Montague write to the governor in an attempt to obtain a pardon for William Breedlove who had transported escaped slaves on his ferry.
CITE THIS ENTRY